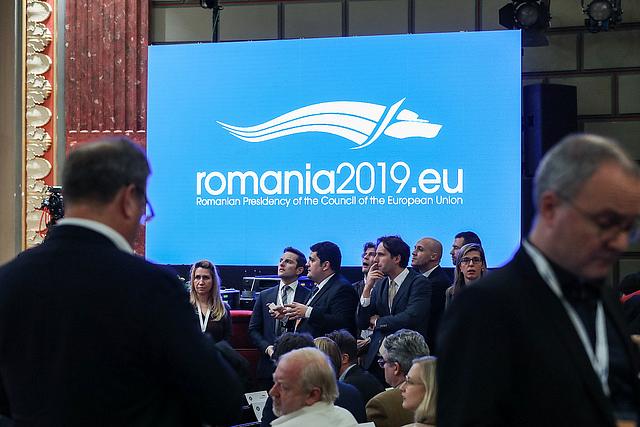 After preliminary jitters over the country’s preparedness to take over the EU Council presidency, Romania oversaw the passing of 90 pieces of legislation during the six months it held the job. But while it presided over negotiations and talks on a variety of issues, Romania was not always in an easy relationship with Brussels as it was warned several times over its rule of law deviations.

This is how Romania’s president Klaus Iohannis evaluated the country’s first-time, six-month mandate at the helm of the EU Council. Among the significant legislative files concluded under the Romanian presidency, the president mentioned the measures to strengthen the banking union, the improvement of labor and social rights, the decarbonisation of transport, and the further enhancing of the Digital Europe.

Under the Romanian presidency, the EU Council adopted a comprehensive legislative package meant to reduce risks in the banking sector and further reinforce banks' ability to withstand potential shocks.

The package includes key measures such as: a leverage ratio requirement for all institutions as well as a leverage ratio buffer for all global systemically important institutions; a net stable funding requirement; a new market risk framework for reporting purposes; a requirement for third-country institutions with significant activities in the EU to have an EU intermediate parent undertaking, among others. The banking package also includes a number of targeted measures to cater for EU specifics, such as incentives for investments in public infrastructure and SMEs or a credit risk framework facilitating the disposal of non-performing loans.

In June, the EU Council adopted a directive on work-life balance for parents and carers, which aims to increase the participation of women in the labor market and the take-up of family-related leave and flexible working arrangements.

At the same time, it includes an individual right to 4 months of parental leave, from which 2 months are non-transferable between the parents and are paid. The level of payment and the age limit of the child are set by member states.

The directive also introduces the carers' leave, for workers caring for relatives in need of care or support due to serious medical reasons. Carers will be able to take 5 working days per year. Member states may use a different reference period, allocate leave on a case-by-case basis, and may introduce additional conditions for the exercise of this right.

It also covers flexible working arrangements, with the right of parents to request these arrangements extended to include working carers.

A Safer Europe was one of the commitments of the Romanian presidency, and it matched with the Regulation on the European Border and Coast Guard. This strengthens the agency in terms of staff and technical equipment, and gives it a broader mandate to support member states’ activities on border protection, return and cooperation with third countries. To ensure coherent management of external borders and to be able to respond to future crisis situations, a standing corps will be set up, with up to 10,000 operational staff by 2027. This standing corps will include operational staff members from Frontex, staff from member states under long-term secondments or short-term deployment, and a reserve for rapid reaction.

Under the Romanian presidency, an agreement was reached on the amendment to the gas directive, proposed by the European Commission in 2017. Under the amendment, the rules governing the EU's internal gas market apply to gas transmission lines between a member state and a third country, up to the border of the member state's territory and territorial sea. The amendment was aimed at closing a legal gap in the EU's regulatory framework and boosting competition in the gas market. Among the main elements of the EU gas market rules, set out in the so-called gas directive from 2009, are ownership unbundling, third-party access, non-discriminatory tariffs and transparency requirements.

The EU Council adopted binding targets for zero- and low-emission vehicles in public procurement in each member state. Under the new rules, minimum procurement targets at national level are set for clean light-duty vehicles (cars and vans) and heavy-duty vehicles (trucks and buses). The measures involve two different reference periods, one ending in 2025 and the other in 2030. The text also includes a new definition of a 'clean vehicle'. The definition of a clean light-duty vehicle is based on CO2 emission standards, with a zero CO2 emission threshold from 2026 onwards. The definition of clean heavy-duty vehicles is based on the use of alternative fuels. In addition, there are sub-targets for zero-emission buses.

This February, the European Union agreed to reduce CO2 emissions from new trucks and buses by 30% by 2030.

The Romanian presidency and the European Parliament reached in March an understanding on the proposal to establish a new financing program, called Digital Europe, covering the period 2021-2027. The program aims to promote the large-scale roll-out and uptake of key digital technologies such as artificial intelligence applications and state-of-the-art cybersecurity tools. It will provide funding for projects in five areas: supercomputing, artificial intelligence, cybersecurity, advanced digital skills, and ensuring wide use of digital technologies across the economy and society. At the same time, the program will support advanced digital skills training for citizens, as well as for small and medium-sized enterprises and public administrations. Digital Europe will be complementary to a number of other program supporting digital transformation, such as Horizon Europe and the digital aspects of the Connecting Europe Facility.

One of the key topics throughout the duration of the EU Council presidency was the debate regarding the future Multiannual Financial Framework (MFF) for 2021-2027. The Romanian presidency obtained agreements for 10 sectoral proposals of the MFF, the Romanian Government announced. European Council president Donald Tusk called Romania's work “good progress”, while the European Council welcomed the work and called on Finland's Presidency to pursue it further.

As it happened with the Bulgarian and Austrian presidencies, the Romanian one has worked to take the negotiations forward on the Commission's budget proposal that would "deliver on Europe's priorities as set out by Leaders in Bratislava in 2016 and in Rome in 2017.”  Last year, the European Commission proposed a “pragmatic, modern, long-term budget for the 2021-2027 period” to fit the new, 27-member union. It proposed a budget of EUR 1,135 billion in commitments, equivalent to 1.11% of the EU27's gross national income. Among the aspects covered are a strong focus on European added value; the streamlined and more transparent structure of the future budget; the reduction in the number of programs and the creation of new integrated program in areas such as investing in people, the single market, strategic investments and rights and values; the increased focus on synergies between instruments; and the simplification of funding rules.

Among the tens of meetings held in Romania throughout the EU Council presidency, the informal summit of EU leaders held in Sibiu was a highlight event. Hosted by Romanian president Klaus Iohannis, a native of Sibiu and former mayor of the city, the summit saw the adoption of the Sibiu Declaration, a document outlining a commitment to one Europe, “united through thick and thin.”

The summit was initially meant to be the first post-Brexit gathering of EU leaders but as the process was postponed the event outlined some broad directions for the Union’s future but did not bring about major decisions. The event was another opportunity for EU leaders to stress the importance of the rule of law as the basis of European values, a topic EU has often warned Romania about in the past two years.

During the six months it held the EU Council presidency, Romania was on several occasions warned of the course it was taking with the changes to the justice laws initiated by the ruling coalition parties.

In April, twelve of Romania’s most important international partners have called on the Romanian Government to refrain from any changes to the judiciary laws that would weaken the rule of law and fight against corruption in the country. The letter was signed by the embassies of Austria, Belgium, Canada, Denmark, Finland, France, Germany, Ireland, Netherlands, Norway, Sweden, and the United States. It came on the same day that European Commission first vice president Frans Timmermans issued a strong warning to Romania, asking the country’s Government to refrain from measures that would weaken the independence of the judiciary. Later, in May, Timmermans warned Romania that it could be placed under a new control mechanism, the Rule of Law Framework, which would replace the Control and Verification Mechanism (CVM), which was imposed on Romania and Bulgaria in 2007 when they joined the European Union. The measure would be taken to avoid activating Article 7 of the EU Treaty (which would suspend some of the country’s rights as an EU member), if the changes to the criminal code, criminal procedure code and corruption law recently passed by the Parliament were enforced.

The ruling coalition push to have the changes to the justice laws enforced seems to have stopped after the defeat in the EU elections and a referendum that showed the voters’ opposition to them. One day after the EU elections, ruling party leader Liviu Dragnea was sent to jail in a corruption case in which he had been sentenced a year before.  Meanwhile, prime minister Viorica Dancila, who took over as interim leader of the Social Democratic Party (PSD) after Dragnea was imprisoned, asked her colleagues in the party’s parliamentary groups to stop talking publicly about justice, while criticizing the policies pushed by Dragnea.

More recently, Justice Commissioner Vera Jourová said this June that Romania was not currently facing the activation of the Article 7 of the EU Treaty.

Romania’s EU Council presidency coincided with the hearings and negotiations to appoint the chief European Public Prosecutor. A Romanian candidate, Laura Codruta Kovesi, the first national who could hold such a high-profile position, emerged as a top contender for the post but Romania lobbied against her, arguing she had abused her position on several occasions, a reason for her dismissal from the position of head prosecutor of Romania’s Anticorruption Directorate (DNA).

Kovesi won the support of the European Parliament but not that of the EU Council.  She was the first choice of the international board of specialists that carried out the selection process for the position of chief prosecutor of the European Public Prosecutor's Office (EPPO). However, she lost the vote of the Committee of Permanent Representatives in the European Union (COREPER) to French candidate Jean-François Bohnert. Still, Kovesi won the vote in the European Parliament's Committee on Civil Liberties, Justice and Home Affairs (LIBE) and the Committee on Budgetary Control (CONT).

Throughout the job hearings, Kovesi was even under investigation by the newly-establish section for the investigation of magistrates and briefly banned from leaving the country. Afterwards, the Romanian High Court of Cassation and Justice ruled that Kovesi did not commit misconduct.