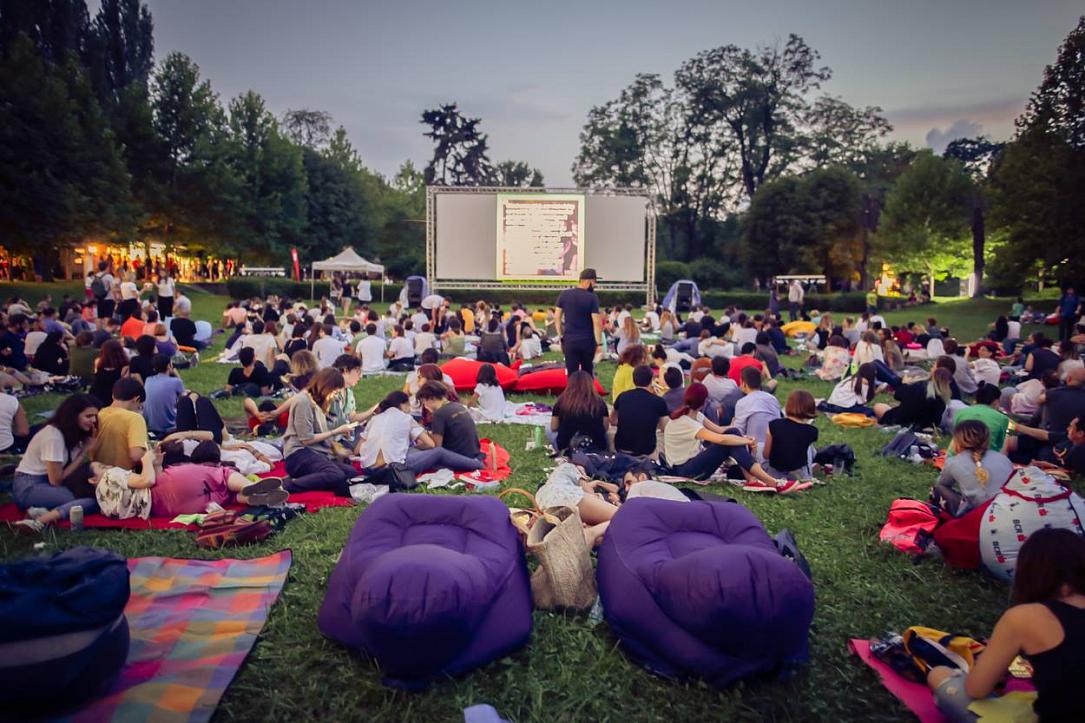 Enjoying an outdoor film screening is part of the summer experience, and the Bucharest offer ranges from classical films to recent, awarded productions, screened either as part of festivals or at dedicated venues.

Already at its sixth edition, this event combines the picnic experience with film-watching in beautiful locations. This year, the venue is the domain of Mogoșoaia, some 20 km north of Bucharest.

For three evenings, between July 26 and July 28, the public can watch a collection of short films sitting comfortably on a blanket, in a hammock or on the shore of the lake, alongside friends, family, children, and pets. Apart from simply relaxing in nature, other experiences available on the domain include exploring the nearby forest and the domain, slackline, workshops for families, a reading corner, and more.

More on what films will be screened here. Tickets are available here.

A project of Creart, one of the cultural centers of the Bucharest City Hall, it screens a variety of films at Grădina cu Filme (7 Alexandru Lahovari Square). In addition to the program of local and international films, independent or big studio productions, the program of this summer also includes acoustic concerts, and stand-up comedy shows. The film part includes sections such as The Evening of Romanian Film, which comes with debates on local cinema, or The Evening of European Film.

Some of the films screened so far were A Star Is Born, Interstellar, When Harry Met Sally…, The Legend of Tarzan, American Sniper, Dunkirk, or Sully.

Entrance to the screenings is free of charge, within available seating. Tickets need to be purchased for The Evening of Romanian Film, The Evening of European Film, and the stand-up comedy shows. Tickets are available at bilete.ro or at the Creart ticket office in Lahovari Square.

The program is updated here. It runs until September.

This rooftop venue, sitting on top of a former cotton plant (at 106 Splaiul Unirii), hosts screenings of classical films, presented by Paramount Channel. Among the movies in the program are Funny Face, starring Audrey Hepburn and Fred Astaire; Runaway Train, starring Jon Voight and Eric Roberts; To Catch a Thief, starring Cary Grant and Grace Kelly; Barbarella, played by Jane Fonda; Rosemary's Baby, starring Mia Farrow; or The Godfather (parts I and II).

The films are screened on Mondays, until September 2, starting 21:00. Entrance is free of charge. The program is updated here.

This open-air film screening program is run by Rezidența Scena9 and held in its garden in the capital’s Icoanei neighborhood (32 I.L.Caragiale St.).

Richard Peña, a professor at Columbia University’s School of The Arts, and former program director at the Film Society of Lincoln Center in New York, was in charge with the selection of the films shown. This summer’s program celebrates women directors of world cinema. The public will have the opportunity to see Romanian and French films, feature films but also documentaries of directors such as Agnes Varda, Elisabeta Bostan, Claire Denis or Irene Lusztig.

The program is available here. Screenings start at 21:00 and entrance is free of charge, within available seating.

For eight seasons now, this program has brought European and auteur films to the wide public in outdoor venues. This year, it took place in Bucharest in Titan Park, in Sibiu in the Small Square, and in Arad in Mihai Eminescu Park.

Some of the films screened were Cold War by Pawel Pawlikowski, the winner of the Best Director award at the 2018 Cannes festival, Asghar Farhadi’s Everybody Knows, a Palme d’Or contender last year, Agnes Varda’s Oscar-nominated Faces Places but also Romanian films like Alexandru Mavrodineanu’s Caisă.

Outside of Bucharest, the second edition of film festival Cinemascop takes place between August 1 and August 7 at the Summer Garden in the Eforie Sud seaside resort.

The garden was inaugurated in 1960 and remained open until 2004, when it stopped being used and was abandoned. Last year, the Czech Center together with EUNIC Romania, the Eforie City Hall and Radef Romania Fil, worked to reopen the garden and help it make a new start.

The program is available here. Entrance to the screenings is free of charge.

The upcoming Lună Plină festival, held between August 8 and August 11 in Biertan, in Sibiu county, has its share of outdoor film screenings, in a program dedicated to the horror and fantastic genre. Located some 25 km away from Sighișoara and Mediaș, Biertan is one of the oldest Saxon settlements in Transylvania, and it makes for an ideal location for an open-air, film-watching experience. The program of the event is updated here.

The festival is presented by Transilvania International Film Festival (TIFF), the largest film festival in the country. TIFF also holds open-air film screenings, either at the main event in Cluj-Napoca or at the local editions.