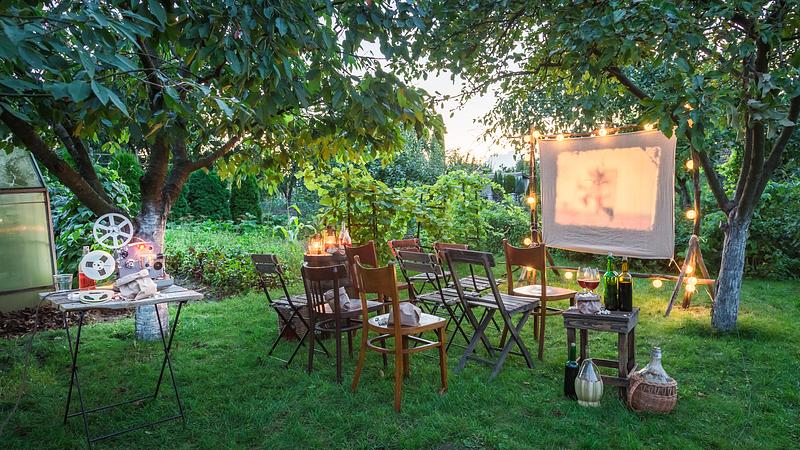 The warm summer evenings favor outdoor events, and many film screenings have moved outside, also a way to adapt to the current sanitary rules imposed by the coronavirus crisis. From art cinema initiatives to corporate-backed events, here is a selection of what is available in Bucharest.

The Film Garden (Grădina cu Filme), an outdoor movie theater and event venue in Bucharest's Lahovari Square, hosts until September 13, from Tuesday to Sunday, a variety of film screenings, in addition to concerts and events.

The program includes series dedicated to Romanian film, European film, dance or fashion films, and music documentaries. The public can discover the Romanian movies alongside film critic Ileana Bîrsan, the program's curator. After the screenings, she will hold interviews with local directors, producers, or actors.

The program for July is available here.

The Elvire Popesco cinema at the French Institute is a favorite spot of film lovers and festival-goers. Until the hall can reopen, and taking advantage of the warm summer evenings, the cinema proposes a series of open-air film screenings in the courtyard of the French Institute. The program includes a variety of French films, older or newer, and many other international productions.

Among the upcoming productions that will be screened are Jean-Luc Godard's Le Mepris (Contempt), starring Brigitte Bardot and Michel Piccoli, Jean Renoir's French Cancan, Elia Suleiman's It Must Be Heaven, a 2019 Palme d'Or contender, and Pedro Almodovar's Dolor y Gloria, also in the race for a Palme d'Or last year at the Cannes film festival, where lead actor Antonio Banderas was named Best Actor for his performance.

The upcoming program is available here.

In its turn, the Cervantes Institute hosts this July a series of film screenings in a partnership with the Embassy of Peru. The films, which run with English subtitles, are shown in the patio of the institute. The screenings start at 21:30, and the next films to be screened are Siete Semillas and One Last Afternoon (La última tarde), a Goya awards nominee in 2018.

Access to the events is free of charge, within a limit of 40 available seats, and can be done based on a prior reservation. The public needs to comply with the current sanitary rules.

The Cinevara program, which offers a series of open-air film screenings in the courtyard of Rezidența BRD Scena9 (32 I.L. Caragiale St.), has reached its second edition this year. The screenings take place between July 9 and September 3, and focus on cultural diversity and the social issues the world has been confronted with.

This year's edition was put together in a partnership with Film Foundation, an organization established by director Martin Scorsese to recover and preserve the world film patrimony. The selection of the films was made by Richard Peña, a professor at the School of the Arts at Columbia University, and a former program director at Film Society of Lincoln Center in New York.

The screenings take place starting at 21:00, and 30 seats are available for each screening. Tickets, priced RON 25, can be purchased at Eventbook.ro. The price of the ticket also includes two beers.

The program is listed here.

Meanwhile, Mov(i)e On is an open-air film festival takes place in the parking lots of Kaufland stores in Bucharest. Until July 26, the event will showcase films "based on a positive message, about the power to succeed and overcome obstacles, about how important it is to find joy in life and help others." The program includes both classic films and more recent productions, including Dancing in the Rain, A Star is Born, Groundhog Day, the Romanian movie Two Lottery Tickets (Două Lozuri), or Marie, Queen of Romania.

The screenings take place in the parking lots of Kaufland Brâncuși, Kaufland Vulcan, and Kaufland Energeticienilor. Access starts at 21:00, the film screenings at 22:00. Entrance is free of charge, within available seating. The public needs to wear a protective mask, disinfect their hands, and undergo a temperature check.

The full program is available here.

Furthermore, throughout the month of July, the Alexandru Ioan Cuza (IOR) Park, in the city's District 3, will host the Orange Pop-Up Cinema program. During the weekends, the public can enjoy a variety of open-air film screenings, with movies such as Shazam!, Doctor Sleep, Peter Rabbitt, The King's Man, The Call of the Wild, or Once Upon a Time in Hollywood.

Tickets are available at iabilet.ro. The proceeds from the sale of the tickets will be donated to the Orange Foundation, to support the Digitaliada program, promoting digital education in rural schools.

Access to the event will be made following the current sanitary rules for public gatherings.