Book review: A British writer’s take on life in a Transylvanian village

Here’s my cure for the last holiday season emotional rollercoaster: two collections of stories written by a British writer who now lives in Romania’s Transylvania.

Mike Ormsby’s books  “Never Mind the Vampires, Here's Transylvania” and “Palincashire - Tales from Transylvania” are filled with humor and a good understanding of the tough life in a Romanian mountain village.

A British author, former BBC journalist and World Service trainer, Mike Ormsby now lives in a village in the Carpathian mountains with his Romanian wife Angela Nicoara, who works in media development. They’ve built a base there, together with their four cats and three dogs.

His two most recent books, published in September last year, are written from the perspective of an outsider - who can’t remain just an outsider - and of a curious observer who will eventually intervene in what he sees around.

This becomes clear from the first story of the “Palincashire - Tales from Transylvania” volume. Mike meets an elderly woman in the center of Brasov, with “sad eyes”, who looks hungry and tries to sell him “The Brothers Grimm Book”. He makes a quick calculation, “It’s a vintage hardback in Romanian with good illustrations, and she needs the cash”. So he buys it. Shortly after, Mike encounters Rushinta, a little girl, begging for money in the railway station. He offers her the books as a present, but the little girl is surprised. Why did you give me the book, she asks. “Rushinta, books are important. They are the key to your future, they will open doors in your life.”

The British writer is accompanied by a series of helpers. One of them is the charismatic vet. Good-looking, always wearing sneakers, sarcastic, but with a big heart, the vet agrees to operate stray dogs without charging any fee.

The main helper is Angela, Mike’s wife. Born in Romania, Angela understands better the realities of this country. She is brave, caring and dares to confront injustices in the village. Reading their adventures together feels like a love story. Walking, drinking tea, reporting together, helping neighbors: Angela and Mike are a team, true partners in crime. When one is down, the other is there for support.

“Driving home, past fragrant meadows where wildflowers bloom and moocows moo, my wife doesn’t say much. Too disappointed, probably. She needs cheering up.

-Angela, I have an idea. Let’s build a Hindu temple in our garden. Buy lots of monkeys from India. Invite some Hare Krishna devotees to have a procession round the village. Get-it-on, bang-a-gong.

In one of the stories called “Run for Your Life”, Mike and Angela accompany Bogdan, a little boy from the village, to a sports competition. The boy is thirsty for recognition, but his parents are just too busy with work to give him that. Bogdan is thrilled when Mike and Angela come see him and cheer for him. After the competition, on the way back home, they meet the young boy’s parents. “Bella and Vlad have scythes over their shoulders, sweat on their brows, and awkward grins. Bogdan leans from our car and tells his mum,<When someone shouts your name, it fills your heart.> His dad says they’ll come next time. Promise. Bogdan sits back and tells me, Drive on. I salute him in my mirror,” Mike writes. 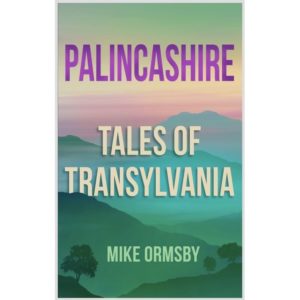 Mikes notices the wrinkles as deserts on old women’s faces, widows wearing black scarves, young girls scything the long grass with their parents. He does point out to the differences, which are sometimes exploited for comedy, like the moment when he learns to make palinca, the strong Romanian brandy. He is a novice, making lots of mistakes, which are amusing for the people in the village.

All the stories revolve around the permanent negotiation between difference and closeness. It’s a constant exchange between Mike and Angela and their neighbors, even a culinary one. Mike and Angela offer them banana cakes and the neighbors give them bottles of milk or jasmine flowers.

“Dița sniffs the pack of tea, puts it into her bag and rummages for something else. “Before I forget, here you are, Doamna.” She offers Angela another posy of bright green leaves and creamy white petals. Angela beams. “These are lovely, thank you, Dița, but you shouldn‘t, really.” “Jasmine, that is”, Mike writes.

Far from the tourists’ quick summer idealization of life in mountain villages, Mike discovers that beauty comes at a price. Life in winter is extremely tough and people’s lives are marked by hardship. By actually living there, Mike manages to escape the temptation to wrap an exotic story around the people he meets. Foreigners easily get into the trap of looking only at “the Romanian villages that keep traditions alive” and “the authentic lifestyle”. 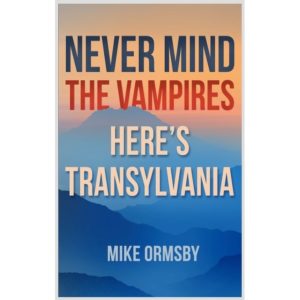 Just like the Western civilization has been charmed for many centuries by the myths of the “noble savage”, it’s easy and attractive to fall for this narrative and overlook the reality of these people, their struggles. It’s a simple fact: people are not good or bad, they are both, be they shepherds or bankers or writers. But you can only understand this if you delve into the reality of these people, like Mike does, and not just glance at them from a distance.

Mike Ormsby’s books are available on Amazon. He also recently recorded in Romania and launched a music album which can be found here. His previous books include Never Mind the Balkans, Here’s Romania, which was his debut short story collection, the tragi-comic two-part novel Child Witch Kinshasa' and 'Child Witch London, and a children’s book Spinner the Winner.

Book review: Loving an Alien – a view of globalization through multicultural couples