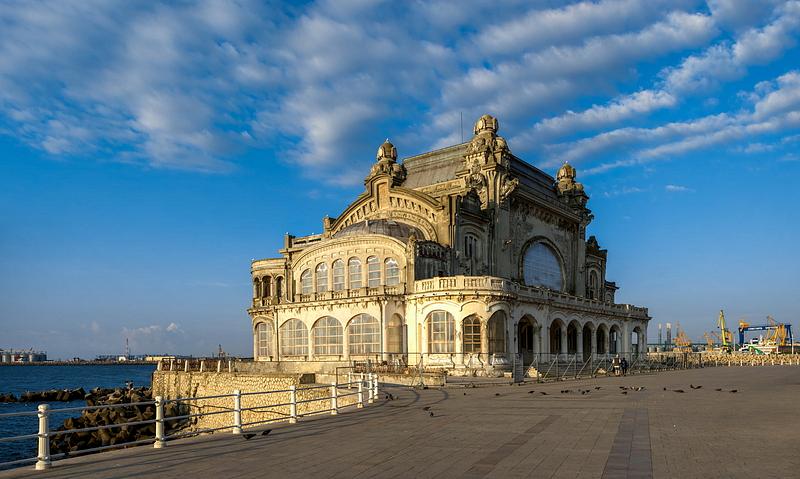 Dobrogea is a must-see for history buffs, who can find here a wealth of ancient sites but also more recent man-made monuments. From Greek settlements to medieval fortresses and testimonies of the maritime activity in the region, here are some landmarks that tell the story of Dobrogea.

Possibly the most talked-about landmark of the region, the Constanța Casino (in opening photo) is an architectural jewel sitting on the waterfront of the Black Sea. It first opened to the public in 1910, after the city had two other casino structures, starting 1880. It was designed by architect Daniel Renard in the Art Nouveau style, with many decorative elements inspired by the sea. After being repurposed during the communist regime and then neglected for years, the building eventually fell into disrepair. The repair works have started only recently, after years of postponed bids for works and campaigning from heritage supporters. Although it cannot be visited yet on the inside, as refurbishment works are ongoing, those who are in the area can \catch a glimpse of it, and revel in its looks, referencing a more glamorous time.

The Grand Mosque of Constanța

Dobrogea, which was under the Ottoman rule for several centuries, has been a melting pot of various cultures, with a now minority population of Turks, Tatars, Greeks, Armenians, and Aromanians or Macedo-Romanians. Among the landmarks testifying to the diversity of the region, is the Grand Mosque of Constanța, a spiritual home for the Muslim community here. Its construction started in 1910, on the orders of King Carol I. Its minaret is 47 meters tall and its interior stair has 140 steps. Among the patrimony items hosted by the mosque is a Persian rug weighing almost 500 kg. It was donated by sultan Abdul Hamid II to the mosque on the island of Ada Kaleh, and in 1965 it was brought to the Constanța Mosque, imam Ali Selcin told Libertatea. Because of its impressive size, it can only be admired partially rolled out.

The Genoese Lighthouse in Constanța

A testimony of the naval activity in the area, the Genoese Lighthouse in Constanța lit up this February for the first time in more than 100 years. It is unknown if the name references its Genoese builders, or it is an attribute given later. However, its current look dates back to 1858 – 1860, when French engineer of Armenian origin Artin Aslan rebuilt a previous construction. The 12-meter tall lighthouse was in use until 1913 when the more modern Carol I lighthouse took over the role of guiding the ships towards the port of Constanța.

This fortress is located 2 km away from Enisala, on a hill in the area of Razim and Babadag lakes. Specialists believe it was built during the 14th century by the Genoese merchants, who had a monopoly on the navigation in the area. It was later integrated into the defense system of Wallachia. It hosted an Ottoman garrison as the region came under Ottoman domination, and endured in time, despite degradation caused by various weather phenomena. It was refurbished in 1991 and became a tourist landmark of the region.

Built between 1890 and 1895 to ensure the railway connection between Bucharest and Constanţa, the bridge was touted as an engineering feat of the time. It was initially called the Carol I Bridge and later took on the name of the engineer who designed it - Anghel Saligny. It cost 35 million gold lei to build and was constructed 30 meters above the Danube to allow the passage of tall ships. At its Cernavodă end, two bronze statues representing soldiers were placed, to honor the memory of those who died fighting in the Independence War. The bridge was used for almost a century until the new Cernavodă Bridge was inaugurated nearby in 1987.

Histria is considered the oldest documented settlement on Romania's current territory. It was established by Greek colonists arriving from Miletus, around 675 – 630 BC. It developed continuously for some 1,300 years, from its Greek period to the Byzantine one. Today it is a large archaeological reserve, spreading, together with its necropolises, on some 75 hectares. Besides the open-air site, a museum was also established here, hosting numerous bas-reliefs, ceramics and glass items, jewelry, and many more.

In Adamclisi, visitors can find the ruins of the Roman castrum named Civitas Tropaensium, colonized by the Roman veterans of the Dacian Wars. In 109, the monument called Tropaeum Traiani was inaugurated here, to commemorate the Roman Empire's victories over the Dacians. The monument that can be seen today is a 1977 reconstruction, but fragments of the original, alongside other archaeological vestiges discovered here, can be seen in the Adamclisi Museum.