Skip to main content
Nature
Nature in Făgăraș Mountains: The edelweiss in Romania 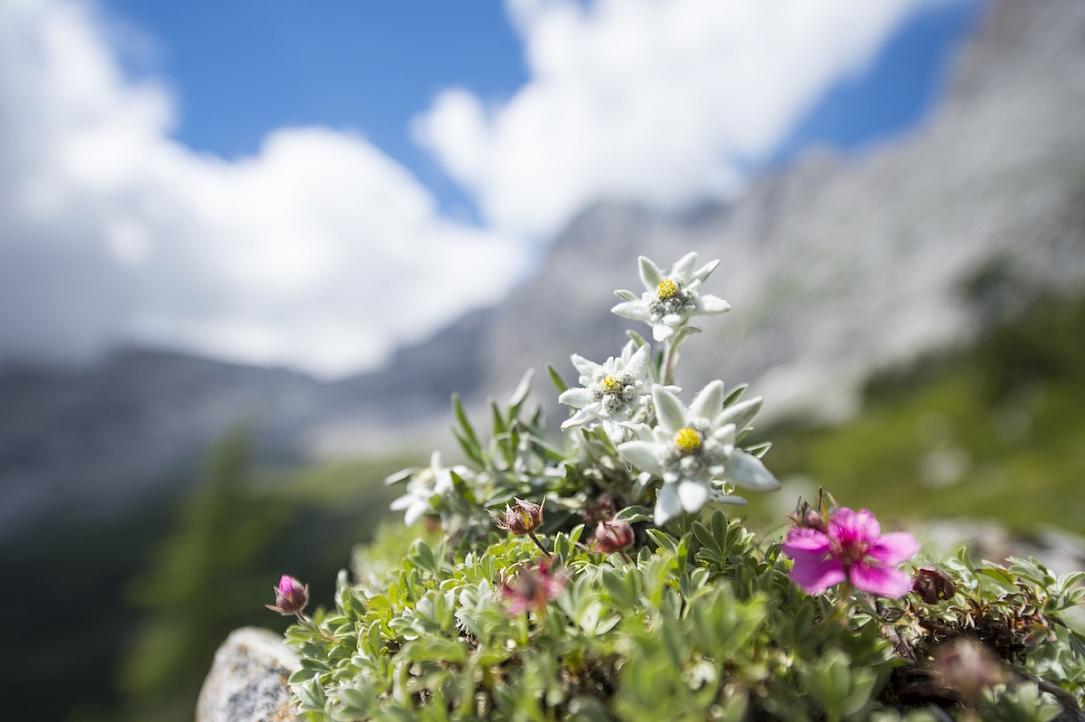 Usually associated with purity, royalty and devotion, the edelweiss is a rare and beautiful mountain flower that can also be found in the Romanian Carpathian Mountains. Protected in many countries, including in Romania, this flower has been having many symbolic uses in various areas, from military and commercial to monetary and tourism, becoming a quite popular flower despite (or maybe thanks to) being rare and hard to reach.

The edelweiss is considered the royal plant. In fact, its name derives from the German word Edelweiß, which is composed of edel, which means noble and weiß, which means white. Thus, edelweiss could be translated as the noble white. In Romanian is called floare de colt, but is also known as floarea reginei (the queen’s flower). In the Italian part of the Alps the flower is referred as Stella Alpina while in the French Alps as Étoile des Alpes, both names meaning Star of the Alps.

The edelweiss prefers rocky places at altitudes between 1,800 and 3,000 meters, being usually associated with the Alps and the Carpathians. In Romania, this beautiful flower grows basically everywhere in the rocky, alpine areas, such as those in the mountains of Maramures, Rodnei, Obcinele Bucovinei, Rarau, Ceahlau, Ciucas, Bucegi, Fagaras, Piatra Craiului, and others.

The edelweiss is a perennial plant of the family Asteraceae, which also includes the daisy and the sunflower. It has small flower heads in a dense cluster, and, below these flower heads, white petals that are arranged in the form of a star. The white, dense hair covering them, which appears to protect the plant from cold and ultraviolet radiation, gives the flowers and the leaves a wooly appearance. The stalks can grow to a size of 3–20 cm in the wild or up to 40 cm in cultivation. The flowers bloom in the summer, between July and September.

Because the edelweiss grow in hard to reach areas and are protected from picking in many countries, people began planting them in their gardens (for the chance to admire them whenever they feel like or to sell them in tourist markets). However, these flowers need specific conditions to grow, such as a rocky place and a specific soil. The plants are short lived and can be grown from seed.

The plant was declared a monument of nature in 1931 in Romania, after becoming so rare that it was in danger of extinction. But this flower is also protected in other European countries as well, and this means that picking it is forbidden. However, picking continues to be the biggest danger for the edelweiss. Just like everything that grows in very rough conditions, these flowers are more vulnerable and so, if they’re picked intensively, they just start to disappear.

A truly charismatic plant, the edelweiss has been highly regarded for many years, having many symbolic uses. For example, the Swiss Army was using badges in the form of edelweiss (instead of stars) for the highest ranks while, in 1907, this flower was established as the sign of the Austrian-Hungarian alpine troops by Emperor Franz Joseph I. Moreover, during World War I, the edelweiss was granted to the German alpine troops, for their bravery. Today it is still associated with alpine troops and is used on the logos of alpine clubs in many European countries, including in Romania.

But things don’t stop there. The edelweiss was also a source of inspiration for music artists (for example a song named Edelweiss was written for Rodgers and Hammerstein's musical The Sound of Music), but it has also been used in the commercial and tourism areas (for the names of various brands, tourism agencies, beer, and even an airline). In Romania, for example, the edelweiss appears on the RON 50 banknote.

In short, the edelweiss is much more than a rare, beautiful flower, being a symbol of purity, courage or devotion, highly appreciated for many, many years.

Imperialtransilvania.com – “The Edelweiss – in Romania was declared a monument of nature in 1931”