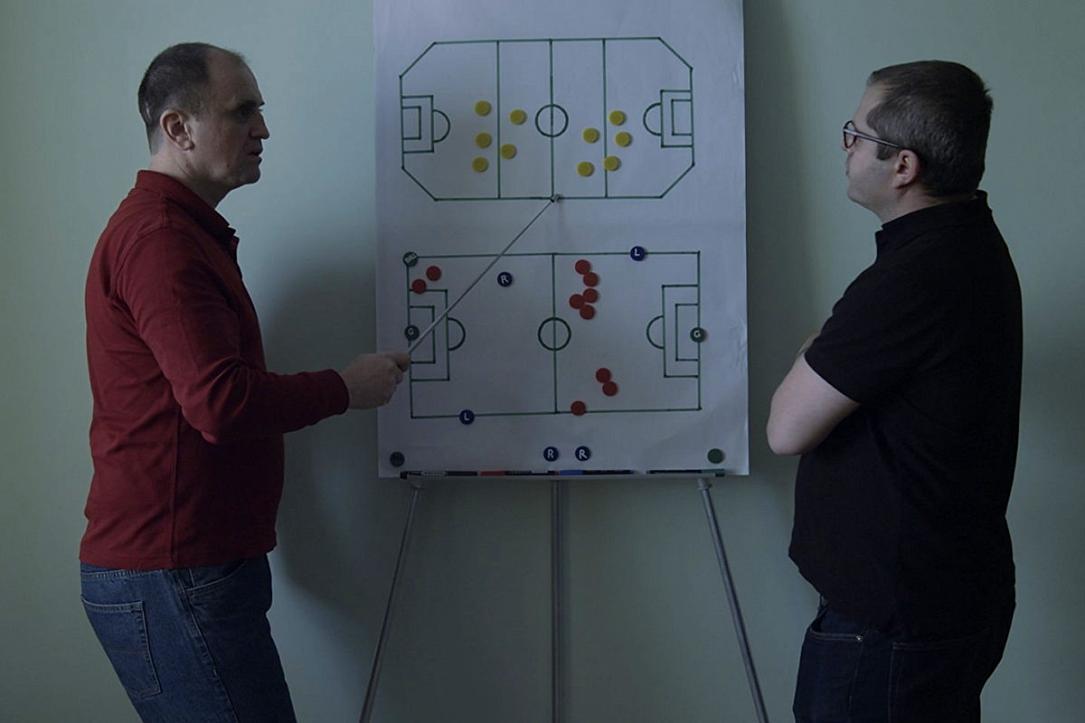 While the Romanian Berlinale winner, Adina Pintilie’s Touch Me Not, is still being discussed with great passion, one of the other two Romanian features screened at the festival has already hit the cinemas on Friday. Corneliu Porumboiu’s Fotbal infinit/Infinite Football was one of the highlights in Berlin, a droll, absurdist delight, so whether you love soccer or not, make sure to put this one on your watch list.

Following his 2014 The Second Game, also a documentary on the sport (surely at this point it must be safe to say he is the most openly football-crazy director around), but this time in a more classical form, and with a more accessible story, Porumbiu goes back once again to his native city of Vaslui and interviews an old friend of his brother’s. The man who wants to register a type of soccer with new rules. Have I mentioned this is a documentary? It is, and the ambition to think up a new game is apparently serious business.

After an injury left untreated after a game, the inventor by the name of Laurențiu Ginghină used the traumatic event to think of new rules for the game, such as an octagonal shape of the field for a more fluid movement and less risk of injury. Other rules include the re-drawing of lines so that players move less across the field, and even the (apparently blasphemic) idea to eliminate the concept of offside altogether. If you have little understanding of soccer rules (or no idea at all, like me), it might be a bit confusing to follow in the beginning, but it soon becomes very clear that this is not (only) about football.

A clerk in the mayor’s office by day and inventor by night (or at any other time he is not working), Ginghină is a man who has come to terms with his life, and mostly with what has not worked out as planned. The film’s great achievement is how it shifts our initial perception of the main character. If he seems ridiculous at the beginning, with his ambitions and references to philosophy, spirituality, or comparing himself to Superman, because (obviously) Clark Kent also worked a boring office job but did amazing things no one would have guessed (all brilliantly funny episodes in the film), he might still seem eccentric at the end, but definitely a man who has found a mission for himself, and whose absolute drive and earnestness make him, if not endearing, then certainly likeable and even admirable.

The main part of the film consists of dialogue, with Ginghină explaining to film director Porumboiu, who is also the interviewer in the film, his ideas for the new sport. It is in between these talks that we also gain insight into his personal life, and watch others run in and out of it: his father, rummaging on the meaning of life and art, or old ladies showing up at work to solve paperwork related to property (and with them it seems a whole country slave to Kafkaesque bureaucracy is barging in). This is actually a film about life and one’s purpose in it.

And since it is a Porumboiu picture, it is also a razor-sharp look at Romanian realities, but without spelling anything out. As usual, the director has the great gift of making something look very non-committal and breezy, but charging it with infinite ways of interpretation. And he does it in the most entertaining way, with an excellent feel for timing, a great ear for dialogue and humour, and being ace at choosing his protagonists. Well done, Mr. Porumboiu; if it takes this particular sport to produce one wondrous documentary after the other, then I am happy to brush up on my football and wait for the next one.