Skip to main content
Politics
What did the EU leaders do in Romania before the Sibiu summit? 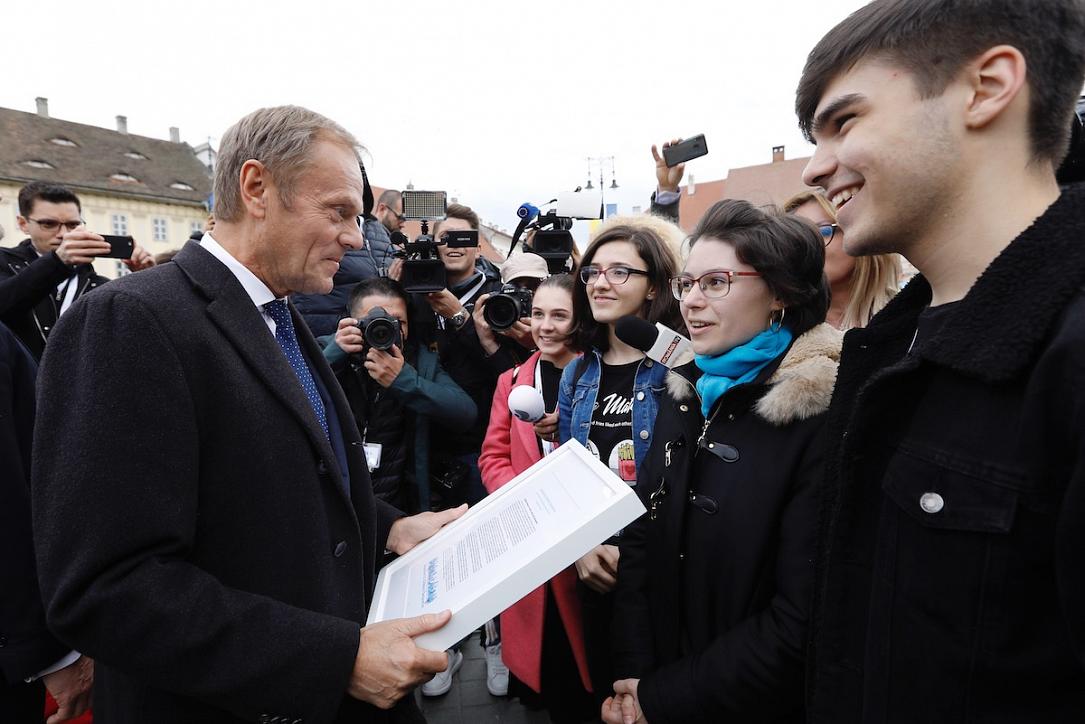 The EU leaders who participated at the historic summit in Sibiu on Thursday, May 9, also had meetings with members of their political groups, attended public debates, and some of them even got to visit a bit of the city. They also had the chance to experience traditional dishes and folk music.

Part of the EU leaders participating in the informal meeting organized in Sibiu, Romania on May 9 arrived in the city one day before and some even chose to take a walk around. European Commission’s president Jean-Claude Juncker and first vice-president Frans Timmermans, as well as European Council president Donald Tusk arrived in Sibiu the day before the summit.

Donald Tusk was one of the EU leaders who decided to take a walk through the city on Wednesday evening. That’s when he met a group of Romanian children who offered him the framed Bucharest Declaration of the Children in the EU, through which the children ask the European leaders to consult and involve them in making decisions that concern them.

Moreover, Tusk also met with retired Romanian footballer Helmuth Duckadam in Sibiu. The Romanian offered the European Council president a pair of gloves, a T-shirt and a plum brandy he made himself, local News.ro reported. Donald Tusk mentioned Helmuth Duckadam in the speech he held in January in Bucharest, at the ceremony marking the start of the Romanian presidency of the Council of the European Union. Tusk spoke only in Romanian at that event, and mentioned Romania’s famous artists and athletes as examples the country should follow, including Duckadam.

Frans Timmermans also stopped to talk to journalists after having a Romanian dinner in Sibiu. He said he ate the traditional eggplant salad and had a local beer, and that walking through Sibiu “is like a fairytale, is like European history in the streets,” local Digi24 reported. He later reportedly watched the Champions League match between Ajax Amsterdam and Tottenham in a pub

The guests at the EU summit in Sibiu were welcomed on Wednesday with traditional Romanian dishes and folk music offered by the "Junii Sibiului" professional ensemble, according to Agerpres. They organized a traditional Romanian evening at a local restaurant, especially for the European guests. Moreover, the “Junii Sibiului” ensemble will also perform in Sibiu’s Great Square on Thursday evening, after the meeting of the EU leaders.

Meanwhile, EC president Jean-Claude Juncker and Romanian president Klaus Iohannis participated in Sibiu in a debate with about 300 young citizens about the future of Europe. The two discussed about important topics such as democracy, migration and fighting climate change but they also included some jokes in their answers, local Digi24 reported.

For example, at some point during the debate Juncker said: “By the way, why do we speak in English? Everyone understands English but nobody understands England.” He also referred to the fact that his mandate as EC president will come to and end on November 1 and “the British are supposed to leave by midnight 31st of October.” “On October 31 I will tell Theresa May that I will leave at midnight so, please, speed up the process.”

There was also a rather funny moment between Juncker and the Romanian president. When Klaus Iohannis said that he is “not satisfied with what’s happening in the European Union,” the EC president replied that he is also “not happy with everything happening in Romania too.” But then Iohannis replied: “That makes two of us.” A full video of the debate is available here.

27 EU leaders meet in Sibiu on May 9 to exchange views on how the future of European Union should look like. Among them, German Chancellor Angela Merkel and French president Emanuel Macron.