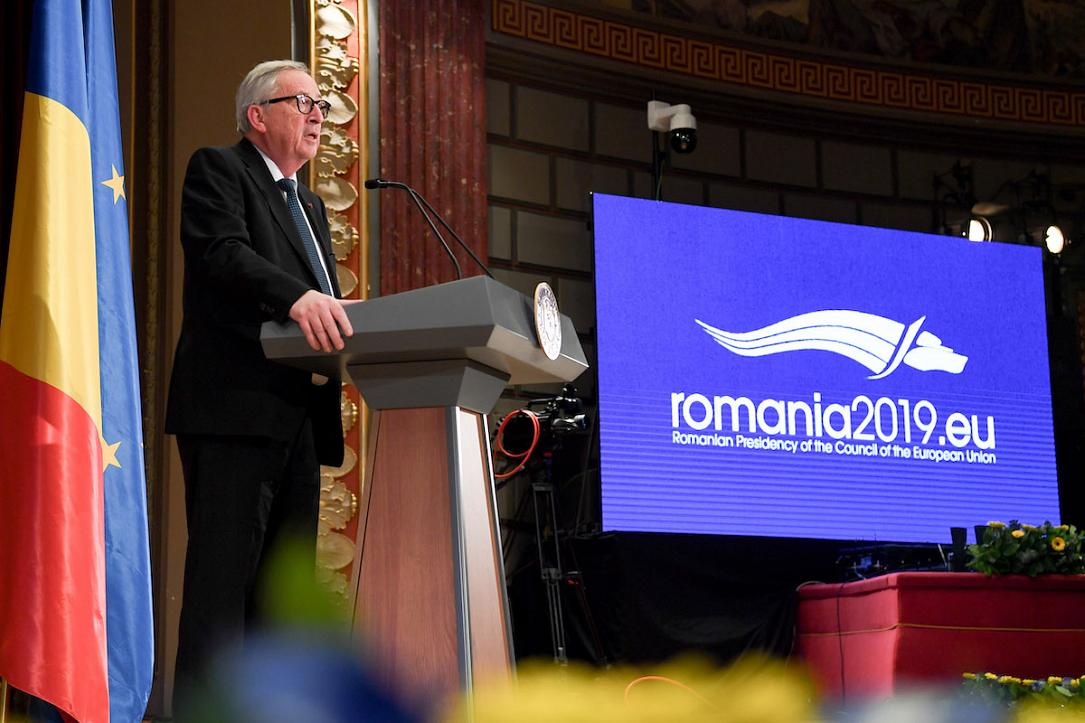 The European Union’s leaders came to Bucharest and tried to motivate Romania to be a good example for Europe as the country officially took over the presidency of the European Council. The official ceremony took place at the Romanian Athenaeum in Bucharest on Thursday evening, January 10.

European Commission president Jean-Claude Juncker, European Council president Donald Tusk and European Parliament president Antonio Tajani held uplifting speeches in front of a large audience at the Athenaeum, which included Romania’s political leaders, European Commission officials, ambassadors and other special guests. They spoke about the need for unity both in Romania and in Europe. Tusk held his whole speech in Romanian and quoted Romanian poets and philosophers.

“I count on the energy and unity of the whole Romanian nation, and that all its political forces and institutions do and decide what needs to be done and decided in the coming months,” Juncker said. “Romania and Europe, Europe and Romania, these are two things that go together. Vive la Roumanie! Vive L’Europe!” he added at the end of his speech in which he also talked about his support for Romania to become part of Schengen and about the need to defend EU values, such as rule of law and democracy. (Full speech, in French, available here).

European Parliament Antonio Tajani also showed his appreciation for Romania and the Romanian people and appealed to the member states that have been blocking Romania and Bulgaria from joining the Schengen area to reconsider their positions. “Romania must have a central role in building the new Europe,” he said and ended his speech with a saying from Romania’s folklore: “where there’s one, there’s no strength, where there are two, the strength is growing”. (Full speech translated in English here)

The evening’s best speech, however, was that of European Council president Donald Tusk, who spoke only in Romanian and mentioned Romania’s famous artists and athletes as examples the country should follow. “I am sure that you will be performing your own 'Romanian Rhapsody' with energy and wisdom during these six months. I’m sure that your presidency will be as energetic, Romanian and European as George Enescu’s music,” Tusk said.

“To a large degree it will now be up to Romania, how, and if, Europe will overcome the challenges of the future. It depends only on you, whether, for Europe, Romanian politics will be a good example, or a dire warning,” Tusk also said. “To those in the European Union who might think that playing outside the agreed rules and cutting corners means strength, I say: you are wrong. It means weakness. To those working hard to defend European values, our freedoms and rights, I say: keep fighting. Remember that there will always be challenges and, sometimes, 'light does not come from light, but from darkness', as Mircea Eliade once put it.” (His full speech translated in English is available here)

At the end, he appealed to all Romanians to defend the fundamentals of the EU political civilization – freedom, integrity, respecting truth in the public life, rule of law and constitution – with the same determination with which Romanian goalkeeper Helmuth Duckadam blocked four consecutive penalties in the European Champions Cup final that Steaua Bucharest won against FC Barcelona in 1986.

Romania will hold the EU Council presidency in the first half of 2018, which means that it will preside over important discussions between member states about the EU future after Brexit and about the next financial exercise. An important summit of the EU leaders will also take place in the central Romania city of Sibiu, on May 9.

However, the EU Council presidency comes at a time when Romania’s political leaders are divided after two years in which the ruling coalition and the Government have tried to reform the country’s justice system, facing opposition from president Klaus Iohannis and the civil society as well as criticism from EU institutions. The European Commission has been increasingly firm in expressing its disapproval with the changes the ruling coalition has brought to the justice laws and criminal codes in Romania, which it described as reversed progress in the fight against corruption, according to the latest CVM report. Moreover, the European Parliament adopted a resolution in November 2018 asking Romania to reconsider its justice reforms and take into account the recommendations received from international bodies such as the Venice Commission and GRECO.

Moreover, the leaders of Romania’s ruling party, the Social Democratic Party (PSD), have adopted an increasingly anti-European and anti-multinational rhetoric in recent months. Notably, PSD leader Liviu Dragnea, who is also Chamber of Deputies speaker, was the only Romanian high official who didn’t attend the official ceremony at the Athenaeum on January 10. Apparently, he is on holiday and delegated his deputy, former justice minister Florin Iordache, to represent the Chamber. Iordache held a speech in which he said that blunt discourse will likely continue in the next months, as Romania is in an election year, but that this won’t affect the country’s mandate during the EU Council presidency, according to Mediafax.