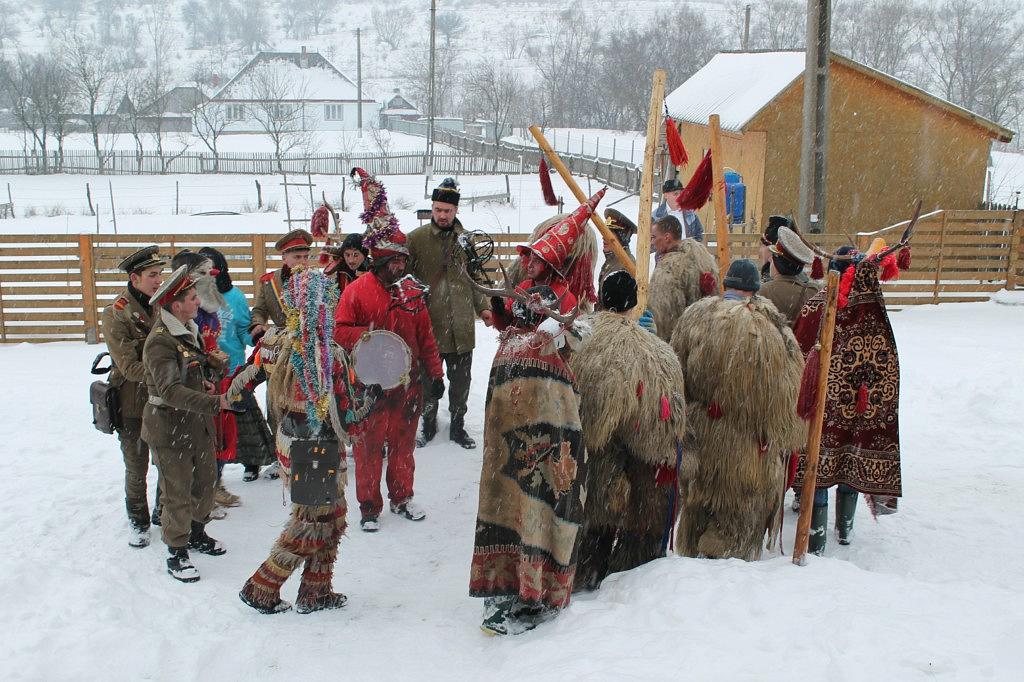 Romanians seem to have lost something that has helped them survive through centuries of oppression: their joy.

Growing up in a small village in Romania’s beautiful Bucovina region, the winter holidays were my favorite time of the year: a whole month filled with wonderful traditions and lots of joy, culminating on New Year’s Eve. As a child, I would spend weeks ahead preparing for this moment and weeks after reliving it.

A few days before Christmas, I would join other children in the village opening the way for the local priest who went to every house to announce the birth of Christ. A group of some 10-15 boys, we would get apples, nuts or pretzels, tell jokes or play pranks on each other for a whole day. Then, on Christmas Eve, I would go caroling with other children my age and hurry back home to wait for Santa. I remember meeting dozens of young carolers on that evening. The next day, groups of boys would go to each house with a star made of wood, tinsel and crepe paper, singing a song about the star that announced the birth of Christ to the world. Some 6-7 such groups would come to each house in the village. They would get money and cookies.

Then, for a week after Christmas, you could hear everywhere in the village the sound of drums and bells, as we would start preparing to celebrate the New Year. The younger children would go first, caroling an agrarian carol called “Plugusorul” (the little plough), wishing for prosperity in the year to come. They would get home-made pretzels from people whose houses they caroled. Older children would follow in groups, perform the Bear’s Dance or the Goat’s Dance. Each such dance required weeks of preparations in advance, for sowing the suits and rehearsing the songs and choreography.

Meanwhile, young men would form a large band that performed a whole show, that included a flame throwers’ dance, officers’ dance, the bears’ dance, and the goat’s dance. Masked men would accompany them and play various pranks. They even had a brass orchestra. They were the main event of the holiday and would come caroling during the night or on January 1 as they would go to each house. Sometimes, whey would walk and dance in those costumes for 48 hours, through cold and snow, but that didn’t bother them at all as each family would welcome them with food and drinks. Dozens of children would follow them from house to house just to watch their performance more times and learn the various dances so they would perform them themselves in the following years.

Adults, masked or not, would wander the village in the first days of the year visiting friends or relatives to wish them a better year and to have a drink together. Noise and laughter everywhere. Those days, everyone seemed to be happy and optimistic about the new year, leaving worries aside just for a few days.

Over the years, many of the traditions seem to have disappeared from my small village and with them, the joy of the holidays. Perhaps this is true in other rural parts of Romania. Each year, the groups of carolers and dancing bears would get smaller. This year, as I spent the holidays there, on New Year’s Eve, only one group of carolers and one small group of bear dancers visited our house. No goat’s dance, no band, no masked men. Only the fireworks at midnight, which were something new in the village 25 years ago anyway, broke the silence at midnight.

Nowadays, even in my little village, people party at home, in front of the TV, sending greetings over Facebook or Whatsapp to relatives, friends and even neighbors, or they chat over Skype with members of their families or friends who are now living abroad. But one cannot blame technology (only) for killing the holiday spirit and traditions. Each year, it seems that more houses are dark on the Christmas and New Year’s Eve, as their owners, who went to work and live in other countries, decide not to return for the holidays. In other houses, parents or grandparents spend the holidays alone, as their children are also away.

Over the last 20 years, over 4 million young or mature Romanians have gone abroad looking to make a better life for themselves. Most of them are from villages like mine, where they just couldn’t find jobs or opportunities on which they could build a future for themselves and their families. Leaving their homes and their families behind was not an easy decision and many of them didn’t plan on leaving for good. For many years, they would come back home each summer to build new houses, where they planned to return one day. But over the years, fewer seem to return.

As they build families abroad, many Romanians realize that their lives are more there than here. They get married, they have children there and, as their parents and grandparents get old and some also die, their connection to their country and their villages fades away. In 2016, for the first time there were more Romanian children born abroad than in the country. Those children will grow up in other countries, go to school there and ultimately become more Italian, German or Brit than Romanian. Maybe they will come back to Romania once every few years, maybe for the winter holidays, hoping to see the beautiful traditions that their parents told them about from when they were children. Unfortunately, few of them will have the opportunity to witness them, as there are fewer and fewer in Romania willing to keep those traditions alive.

It doesn’t have to be this way. But for traditions to survive, Romania needs children to pass them to. The joy of the holidays, the Romanian identity, these can’t survive without… people. People willing to stay and to re-build. Romanian politicians don’t seem to understand this, or choose to ignore it. The same politicians who speak emphatically of Romanian pride, independence and spirit actually sabotage these ideals by killing Romania’s future.

The fact that Romania’s population goes down each year, that fewer babies are born in the country, that Romania is last in the European Union when it comes to education, healthcare and research are all connected. And yet, the state is not addressing these issues. Instead, members of the Parliament are keen on changing the justice laws even with the risk of having Romania thrown at the outskirts of Europe, making sure that those who have left would never return and more will join them.

Romania enters the year of its centenary sadder and more divided than ever. As the example of this country’s founding fathers shows us, sometimes you have to fight to recover your joy and future.