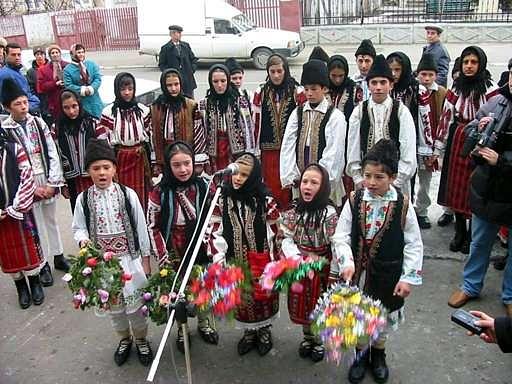 In Romania, Christmas is about a lot more than decorating the Christmas trees and offering gifts. The country is well known for its numerous traditions and superstitions around orthodox holidays, and Christmas makes no exception.

One of the most popular Christmas traditions is caroling. Although traditions vary depending on the area, the ritual of going from house to house and singing carols has survived in most of the country, despite the variations in songs, costumes and rewards for carolers.

In Romania children and adults alike go caroling on Christmas Eve. Actually, in Bucharest and in other big cities they start long before that, as they try to go to as many houses as possible. If you live in a block of flats, chances are carolers have already visited you. Carolers usually expect small food and beverage goodies, such as fruits, nuts, cookies, or glasses of wine for adult carolers, in exchange for their performances. Nowadays, people also give money, the amount depending on the number of people in the group of carolers.

Traditionally, carolers have bells, whips, and drums and make noise to dispel the evil spirits. Some of them also wear costumes and masks symbolizing diverse animals such as bears, goats, and horses, which represent the evil forces. In the countryside, the caroling tradition comes in different forms. There is the simple caroling, which involves only people singing, and there are special carols, which include special costumes and masks, dancing and more complex performances. The latter are usually to be found in villages, but you might see some street performances in cities as well, including in Bucharest.In villages, masked carolers come on New Year's Eve or on the first day of the new year.

There is an impressive tradition that is mainly kept in Moldova and Bucovina regions, called the Bear’s Dance. The group is made up of young men costumed as bears, as well as bear-leaders, plovers, and drummers. Each of them is playing a role in the ritual. The ritual presents the bear’s death and rebirth, which symbolizes the New Year that is about to come.

Another important caroling tradition is called The Goat (Capra) and involves one or more people dressed up in multicolored goat-like costumes, who jump and dance to scare the host, accompanied by a group of singers. Other caroling traditions involve drums, masks and lots of noise, depending on the region. Often, the Bear and the Goat will come together in one big group of masked carolers.

Pig slaughtering is another Christmas tradition in Romania. The Romanian families who still keep the tradition usually slaughter the pig on December 20, the Ignat Day. Pork is the main meat Romanians eat on Christmas, as it used in many dishes and Christmas products, such as different types of sausages, piftie (a dish in which the meat and other ingredients are put together in a gelatin), steaks, or even soup.

Another dish that is found on almost any family of Romanians on Christmas day is sarmale. This is usually made of cabbage leaves rolled around a filling usually based on minced meat. Some like to eat sarmale with sour cream and hot pepper or garlic.

During Christmas, Romanians also bake or buy various special dishes, including desserts and sweets. The cozonac (a sweet bread usually made with cocoa and nuts) is the most popular. Meanwhile, the traditional tuica (or palinca in some regions) is the Romanians’ favorite alcoholic drink on Christmas.

The Christmas Eve is on December 24. A traditional Romanian sweet served on the occasion is called “nappy Jesus” (in Romanian called Turte or Scutecele lui Hristos) made of thin layers baked on a hotplate and filled with honey and nuts.

Many people in Romania cook Christmas dishes on Christmas Eve (in cities, many also go shopping during this day). In the evening, the tradition goes that the garbage must not be thrown out, to avoid grievances and damages, the chimneys are cleaned and the ash is thrown on the vineyard, to ensure a bountiful harvest in the year to come. Children bring home fruits, nuts, money, knot-baked bread and other goods they received from caroling and wait for the arrival of Santa Claus.

Christmas is one of the most important holidays in Romania, being seen as the celebration of peace and joy, when all conflicts and wrath should disappear, and when all family members gather around the table after attending church services and after caroling.

Impressive Christmas traditions in Romania: the Bear’s dance, the Goat, the Star, and drumming bands