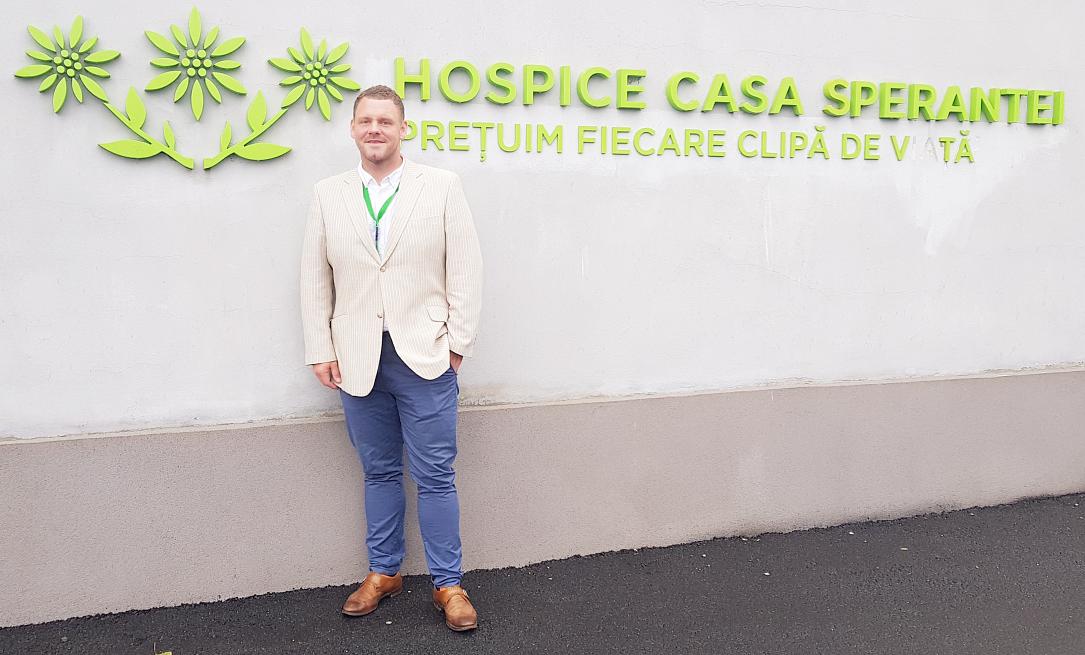 Ashley Williams didn’t need any online research when he decided to move from Lincolnshire in UK to Romania to start what would be his first ever job abroad. It turned out he was right to take the plunge.

Ashley arrived in Bucharest on February 1, soon after taking the job as director of Hospice Casa Speranței’s new palliative care center in Adunații-Copăceni, about 20 km from Bucharest. He is now in charge of finishing off the building and equipping it, as well as with finding staff, while preparing the site to move into service. The new center should open on September 21.

Ashley, who is 33, didn’t know much about Romania or Bucharest when he accepted the job, except for the fact that there were many Romanians living in the UK and that Romania’s image abroad was not the best. None of the many trips and holidays he had spent abroad ever brought him to Romania. Ashley has been traveling quite a lot, especially to France, Italy and Germany. Travelling is one of his hobbies, which helped him discover lots of places in Romania since he moved here. In just a few months, he managed to visit almost all the museums in Bucharest.

His positive and curious way of being may have contributed to the easiness of making the decision to move to the Romanian capital. “I have always been looking for new and interesting things to do, which I think is how I ended up being in Romania at the end of all of that. I ran out of new things in the UK so I had to leave,” he says.

Ashley Williams grew up in Lincolnshire, which is a very flat agriculture county in the UK. He went to school in a rural area and lived  “in the middle of nowhere” during his childhood.

Fast forward a few years, at university, his first degree was in classical singing, meaning he trained as an opera singer. He then moved to education and began to teach music. Life had other plans, however: he realized that school teaching wasn’t his thing. So he decided to open his first business: pet care services in London.

He then shifted towards something else once again, and started working in various voluntary roles, within the political fields in the UK. Next, he took over a few other roles within various NGOs.

Now working his first assignment abroad in Bucharest, he doesn't seem bothered by traffic, noise or pollution like many Bucharesters and even the tourists. When working in a center that takes care of terminally ill people, many small negative things don't look that important.

However, Ashley found it hard to get used to parking and driving in the Romanian capital. Although he got used to driving on the right side of the road, it was much harder to get used to the way Bucharesters drive. “It seems traffic lights and other such things are sometimes advisory to certain people.” After the shock of the first drive in Bucharest, in a few months, he even changed his way of driving. “Now I drive differently, I am used to these drivers who drive how they like. In UK, people are far more organized with their this.”

On the bright side, in Romania, unlike in UK, shops stay open until very late hours. Ashley also enjoys the local food and the warmth of the people. “Everyone I met tended to be very friendly and warm, which is nice, especially when I first arrived, as I felt attached to the people very quickly. People here seem to be a lot more relaxed and happy than in the UK, friendlier.”

The story of Hospice Casa Speranței

Hospice Casa Speranței, an NGO that offers full palliative care services started operating in 1992. The organization was founded by Graham Perolls OBE, and started with a small mobile medical team that offered home care to the patients suffering from an incurable disease in Brasov. It currently has two centers, in Brasov and Bucharest, in addition to home care mobile units in Făgăraş and Zărneşti. Close to 30,000 people benefited from Hospice’s free services so far.

Hospice is now ready to expand with a new center close to Bucharest, run by Ashley Williams. The new Hospice center in Adunații-Copăceni (picture below), which will be a center for children and families affected by life-limiting conditions, is set to open on September 21.

The property, which comprises a conac “manor house” and five other buildings, was donated to Hospice Casa Speranței in 2013 by the Florescu family. Such a big project still required lots of work and further investments, with the total cost of the project amounting to over EUR 1.8 million. It involved the support of many donors, corporate and individual, alongside many hours of volunteering from companies and individuals working on the site to renovate and redevelop the whole site.

The new center will house a 12-bed inpatient unit, a day center, accommodation for parents and siblings, and also a wide range of medical, social and counseling therapies. “I think thousands of children will benefit from the new building each year,” Ashley Williams said.

As Ashley Williams himself got to discover, working at the Hospice can sometimes be challenging to deal with emotionally. Hospice helps patients who suffer from incurable diseases benefit from adequate palliative services at the right time, so they can live every moment of their lives with dignity, amongst their beloved ones.

“I like the children I see in the day center, I see most of them very regularly in Bucharest and they are the most wonderful bunch of children you could hope to meet. They are always so energetic. I sat down during art projects with them. It is a very lovely place and there’s no negativity around. It’s just occasionally… I noticed at one point that one child I’d seen wasn’t there and I obviously went to research, asking one of the staff where he was and it turned out that the child had died. I just went downstairs, got myself a cup of coffee, went out of Hospice and stood out a little bit just to collect myself.”

“Moments like that sort of make you very aware of what you are doing.”