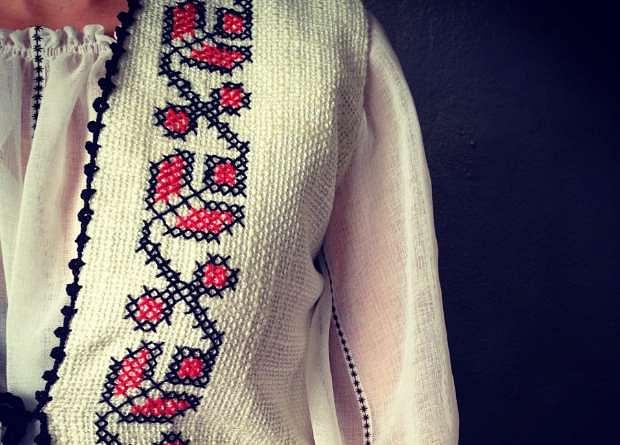 Guest writer Yvette Larsson got in touch with the team behind a new project to revive Romanian traditions, called Tezaur Romanesc - translated as Romanian Treasury.  She talked to Irina Bazon, the public relations manager of Tezaur Romanesc, who is also the specialist and author of the articles on Romanian Village.

What is Tezaur Romanesc and who are the people behind it?

We are a group of young people who love Romania and have initiated a complex and, we could say, a pretty ambitious project, whose main objective is the revival of the traditional crafts and values of the Romanian village, and the conservation of the  Romanian spirit. Being an interdisciplinary platform, we have gathered a large number of specialists from different areas, such as: designers, architects, anthropologists, philologists, sociologists, historians and  journalists. Some of our team members are: Anamaria Stanescu - anthropologist, Ania Moldoveanu - anthropologist, Lavinia Constantin - designer, Matei Hurjui - designer, Raluca Barsan - specialist on Romanian music folklore and dances, Petrea Ciortan - traditional medicine, Horatiu Serb - historian, Cristian Negrea - historian, book writer, Corina Ciobanu, Diana Fota, Ana Armeanu - legal and European funds specialist, Iuliana Stavarache - professional trainer, Teodora Terciu - philologist, Daciana Ungureanu - member of the team, professor at School of Arts in Targu Jiu.

Can you briefly describe each project?

Apart from the documentation and the collecting of texts and information, the project aims to promote traditions and to apply them to everyday life, to initiate research, to promote authentic Romanian products, as well as online advertising and marketing. We also intend to focus all these efforts on improving the peasants’ standard of living.

We emphasize the practical side of things, and want to transfer into real life our crafts and traditions.

The project was launched on January 15 and there are already a few shops that have started working, such as: Atelierul de Haine  – a design shop, opened in the Bucharest's historic center, which is a shop with traditional inspired fashion design: clothes, shoes, and accessories, Lemne si Semne – furniture shop, opened in Moldavia that has wooden furniture with traditional motifs, Grădina fermecată, our Charmed Garden – a project implemented in a few villages from Teleorman, Arges, Gorj supporting the consumption of healthy products from traditional farming.

MestesugArt – a workshop dedicated to the creation of the Romanian blouses (“ii”) and embroidery – in Muntenia.

The Tezaur Romanesc site – which is going to be launched within a week, including articles on topics of interest, written in a an accessible manner, adapted to the social media networks. We have already created a new online platform – Tara noastra-i tara noastra/Our Country is Our Country – where anyone can send photos, articles, songs, videos, and anything else creative, as if with the pieces of a puzzle, the image of a beautiful and  flourishing Romania.

Why did you start all these projects?

Dimitrie Gusti, the founder of the internationally renowned Sociological School of Bucharest, focused on rural monographs, said that “Knowing one’s nation is the best means of serving it”.

Our nation cannot develop itself if we don’t strive to profoundly know and understand the nature of the Romanian people, if we aren’t able to preserve our ethnic and spiritual identity, our memory; all these aspects represent the basis for developing our national culture. Especially in these times of intense dissolution of national identities, we have a duty to protect and promote them. Romanians need to remember their own roots, in order to recover and build an authentic national culture. We strongly believe that this is the only way in which we can assure a sound future for our country

We all have a sacred duty both to our ancestors and our descendants. Moreover, Romania has so many beautiful things to show, all at our fingertips, that it would be a pity to pass by them with indifference.

It all started with a conversation among friends, late at night, about what we would actually want to do and how we would really like to be. This is how the Romanian Treasury project took form. Initially the name seemed a bit pretentious to us, but it eventually imprinted itself in our minds and we just couldn’t change it. Moreover, we jokingly called ourselves “the treasurers” (“tezaurienii”). A great enthusiasm filled our souls. It is hard to explain the motivation and animating force when you really do what you have always wanted to do. This has also helped us to get closer to our parents and our grandparents.

What is the beauty of Romania?

The beauty of Romania comes from what makes it unique.

Dumitru Staniloae, the greatest Romanian theologian, said, in his book, Reflections on the Spirituality of the Romanian People, that Romanians are unique because we unite Latin lucidity with a sense of mystery specific to the peoples of the Eastern Europe.

We have a kind of “bright depths”, a kind of serenity, there is a brightness in our people, a decency (“cuviință”), a balance, a delicacy, a generosity and a warmth that many foreigners have noticed in our people particularly; they have appreciated our hospitality.

This kind of enlightened understanding is also full of “a profound respect towards the endless mystery of people and of the world in general”. All these qualities are reflected in our popular culture, in our folklore, in the Romanian fairy tales, where good always wins over evil, in the Romanian carols and ballads called “doine”.

We also have a word in which all these features are united: the Romanian “dor”  - longing- , which – as Dumitru Staniloae said – “is associated with the communitarian spirit of our people”, something completely different from both the Western individualism and the Asian collectivism.

Without the strength faith, the Romanian people, who have always been “in the way of evils” ,as the Romanian scholar Miron Costin says, wouldn’t have resisted so many hardships.

"Without Orthodoxy our history wouldn’t have known the glory in the times of Mircea cel Bătrân, Mihai Viteazul, Ștefan cel Mare and other voievodes” (Dumitru Staniloae). As a testimony, we have the numerous monasteries founded by Romanian voievodes such as the monasteries of Bucovina, with exterior paintings, many of them raised by Stefan cel Mare, and which have amazed many foreign tourists with their remarkable paintings and rich symbolism.

Another interesting feature that distinguishes Romania from other countries is the maintenance, in certain areas of our country, of the villages of free peasants (yeomen – “răzeși”) until the Interwar period, which is a unique phenomenon in Europe.

In our country, the peasant commons (“obști țărănești”) were a form of resistance of the Romanian people, an example of strong solidarity, which often made the Romanian peasants capable of defending themselves against feudal enslavement.

What are the values of Romania that the world outside can learn from or be inspired by ?

The spirit of community, which, in the case of our people, is derived from what Dumitru Staniloae called “the orthodox personality”, and which was once, especially before the coming of the Communist regime, very strong in the Romanian people, may be a model for the West, where individualism is more pronounced. This spirit of community has played an essential role in the lives of the Romanian people.

Furthermore, the spirit of tolerance, hospitality and altruism are traits often manifested by the Romanians. For example, the tolerance showed by the Romanians by coexisting peacefully, in Dobrogea in nineteenth century, with different ethnic groups which the historical circumstances made our territory a shelter: for Bulgarians, Russians, Germans, Cossacks, Greeks, Armenians and Jews. The number of Romanians in this area was superior to these groups. What is relevant in this example is that Romanians have never imposed themselves on others haven't demanded that they change their habits, language and faith. This peaceful coexistence also allowed our people to preserve their identity and national sentiment.

Other specific traits are the humanity and the spirit of self-sacrifice, for friend or foe, a relative or a stranger. The case of Mircea Vulcanescu – a prominent reprezentative of the Dimitrie Gusti school – who gave his life to save a cellmate, is well-known. Along with these martyrs, the heroes of the anticommunist armed resistance in the mountains will always live in our heart and memory. There are also many ordinary Romanian people whose trials and sacrifices, during the Communist regime, weren’t recorded in history.

Maybe the unspoken advice that the Romanians can give is living a simpler life, closer to nature, to authenticity.

What is the Romanian identity about nowadays, in your opinion ?

Our country has undergone the devastating Communist experiment which started in ’74. Subsequently to the restoration of “democracy” after ’89, the Romanian people have not pulled through yet, because these experiments were meant to eliminate from its consciousness our roots, our identity.

In the Romanian village, there were very strong communities and, certainly, a profounder spirit of solidarity than in the urban areas. Along with the destruction of the village, the spirit of community was also severely weakened, and the depopulation and impoverishment of the villages – a process that continues today -, mass emigration of the peasants, all these facts reflect the tragedy of a people which is being cut off from its’ own roots.

We hope that, with small steps and a lot of determination, we will succeed in our goal to awaken in the consciousness of most Romanians the preoccupation and respect for the past, for our tradition and our spiritual structure, for everything that forms the Romanian identity.

All those who want to take part in the “Romanian Treasury” project are welcome.

How would you put Romania back on the map, in a good way ?

Romania is, without doubt, a blessed country, and we believe that the only means to improve Romania’s image is “from the inside out”, by changing our perception about ourselves, as Romanians.

It’s not only about respect, it’s about learning to appreciate what we have and is right under our noses.

We’re not perfect, of course, but we should try to love those things that belong to us. It may sound outdated and too romantic, but, first of all, we must love our native tongue, our land and ancestors.

In the last 23 years, we were taught to be ashamed of our origins, of being Romanians. We have been constantly told that our peasants are less hard-working than others, that our roads are the worst, that our folk culture is less important, that our schools are worthless, that our language is less fashionable than others, in short, that our country is not good at all.

We should abandon this kind of defeatism. Once we start doing this, the spell will be broken, as in a Romanian fairytale, and everything can get back to normal, to a natural, quiet and meaningful life, worthy of this gifted people.

Yvette Larsson is Swedish, born 1972 in Gällivare, Lapland. She has a Masters of Arts / Upper Secondary School Teachers’ degree from the University of Umeå, Sweden. There she studied English, Swedish, Education, Media & Communication and Science Journalism. She has 13 years of experience as an ex-pat: she lived and worked in The Reunion Island, Norway, France,UK, and Denmark. Yvette has worked with Sports Management for ten years and is a Coach and Leadership Trainer, passionate about facilitating individuals and organizations to find and express their values & visions, talents and impact in the world. Yvette runs the blog and a Facebook -page called The Bucharest Lounge, where she rebrands Romania with beauty and meaning and where she models a new generation of leadership in Romania, all seen through her Swedish lens.