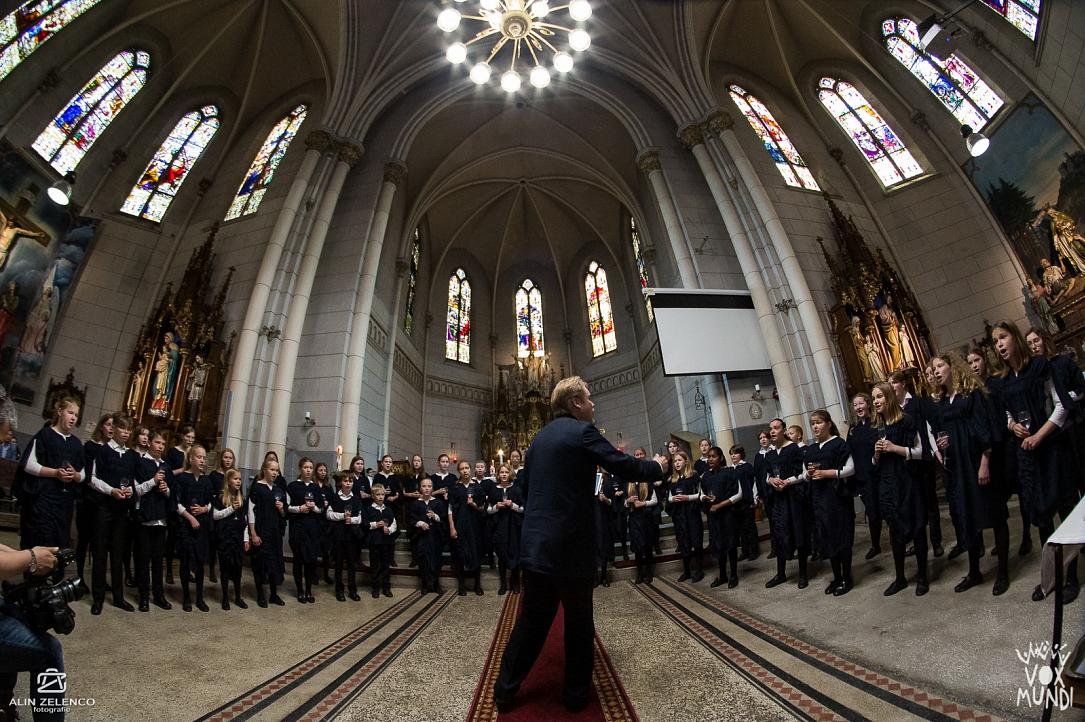 Choral music often gets a bad rep locally because of its association with the Communist period but an initiative in Timișoara has been working to change this. Vox Mundi, an international choral festival for youth created by Kratima Cultural Association, brings choirs from all over Europe to the western Romania city every year. In an email interview, Camelia Mingasson, the president of Kratima Association, told Romania-Insider.com more about how the festival is trying to change the public’s mind about choral music and the outlook for the event’s development.

How did the idea of the festival come about? Did you have certain models for the event?

I didn’t need anyone to persuade me to organize Vox Mundi: I am a former member of the school choir, and of the West University of Timișoara choir. My best friends are former choir colleagues, and the best memories are also choir related.

So, the idea of the festival came about naturally.

I did not have any models… I do not wish to offend anyone, but in Romania, currently, there is no choral music festival that brings on stage choirs of the caliber of those that Vox Mundi presents. We constantly get inspired from the choral music events we take part in, every year, with the children’s choir Cantati, which is active as part of the Kratima Association and is a multiple winner of renowned international competitions.

Did you plan on organizing the festival in Timișoara from the very beginning or did you consider other locations as well?

At first, we wanted to organize the festival in Timișoara only but now I am more and more thinking about taking it outside of the city, towards Arad, the area of Lipova or Reșița, where there is a huge potential to explore in terms of the public but also of the concert venues – conventional but especially unconventional ones.

What kind of perceptions and challenges did you face in the four years of organizing the festival?

Rather “conceptions”… preconceived ideas belonging to people who never had anything to do with a choir and are under the impression that it is synonymous with singing the praises of the “beloved leader” [e.n. dictator Nicolae Ceaușescu was referred to in this way in the official propaganda] more than 30 years ago. Most of them Ignore however the development of the choral music phenomenon everywhere in the world and the evolution of the choral music in the past years. In the end, it is not just a choice but a general knowledge issue. Just as we go to see an exhibition or a theater performance I don’t think it would hurt if we tried a choral music concert, especially when on stage is Les Choristes, who brought the film of the same name a César award, or the Romanian Radio Children Choir. So the biggest challenge is to bring the most atypical and “stubborn” public to the concerts, to convince themselves that it is a unique experience. And there is another challenge, which we did not solve so far: attracting into this adventure strong private sponsors that would understand the huge stake and the immense image benefits brought by a festival that brings hundreds of young people to sing together – in concert halls, churches, at the Post Office Palace, in public squares, on the street.

What does the organizing work of the festival entail? How is the project financed?

We start working on organizing the festival in January and we know the invited choirs around November, a year before. Beginning April we get wrapped up in our work and every second turns into a key moment. We are completely financed from the local budget. The City Hall, through the Culture House of the Timișoara Municipality, is the main backer of the festival.

What kind of music can we hear at the festival?

As the poster says, Vox Mundi is a festival of “modern and contemporary” music, so we listen to music composed after 1900. From established scores to daring adaptations of very recent songs. We get inspiration from jazz music but also from Josh Groban and his “You raise me up.” And we collaborate with musicians from all musical areas.

What is the public of the event? Did it change at all in time? What kind of feedback did you receive so far?

This is a question I like very much because the answer is unexpected, I think. Probably many people believe that choral music has a public of its own and only its own, a niche public, who listens to famous choirs while driving and marks the festival dates in their agenda from one year to another. Well, no. The public of Vox Mundi is not the one of Cântarea României [e.n. a culture festival held from 1976 to 1989 in the Socialist Republic of Romania]. And the greatest joy comes when people who knew nothing about choral music before going to a Vox Mundi concert or gala confess to having discovered something wonderful and become fans. When the photographer, a grown man and a professional engineer, tells everyone that he got goosebumps and misty eyes at the gala.

What is the status of the city's choir project?

At one point we planned to establish a city children’s choir, starting from the existing nucleus of the Cantati children’s choir, of which I spoke earlier. So we thought a children’s choir of the city would be a beneficial experience both for the choir itself and for the municipality, provided that the municipality supported it constantly by financing the participation to an international competition once a year, by making available a rehearsal hall or by paying the professionals who work to take the children to accomplishment, as it happens in Poland or Hungary, for example. With us, it remained in the project stage.

How do you see the festival’s future development? What does it depend upon?

We live in an “Untold” world, where choral music is associated, as I said, with the Communist period and considered “unfit to the times.” And the corporate world is associated with mass culture and considered unreceptive to quality culture. Nonetheless, if in 1989 Timișoara had not been a “choir”, it would not have become the first free city in Romania. Not to mention that, if contemporary society would function as a choir, we would live in an ideal world, where we would listen to each other, respect each other and we would try to live in harmony with those around us. This is why I am sure that Vox Mundi will grow every year, going beyond Timișoara, getting more out into “the street” and contributing to developing a discerning public but also to a choral phenomenon, a “choral culture” similar to that in countries considered civilized, where choir activity is used to integrated children with autism, to solve minor psychiatric illnesses, to aid vulnerable social categories.

The development of the festival thus depends on our enthusiasm, which I hope to never run out of, on the partners we will bring close and, without a doubt, on the way we will know how to identify additional important financing sources.

What other projects does Kratima Association have at this point?

The answer is a long one. For ten years we have been toiling on Timișoara and Banat’s culture market. At this point, we are happy to have successfully closed, recently, the first part of our most important cultural education project Cultural Passport, through which, for the past five years, we have been getting children and youth to make friends with quality culture act but also with the values generated from practicing performance. Very soon, the second part will follow. It has a social part as well: we are trying to put together a library at the school in Gladna Română, an isolated village in Timiș county.

We also work on revitalizing the built patrimony of Timișoara and Banat, and making it stand out with the help of contemporary art forms through the project Poartă Artă!, nominated in 2017 for the National Culture Fund Administration awards.

We also work on the Cultural Policies Observatory, started in 2000, alongside the Intercultural Institute, through which we monitor the evolution of cultural policies.

On the working table, “hot”, is the manuscript of the third volume, a trilingual one, from the collection “Memory and Diversity in Timișoara.” It is a book of confessions – photographs and interviews – about the Timișoara of the old days, from balls, cakes and education to the wonderful friendships between Romanians, Germans, Hungarians, Serbians and Jews, as it has always been the case in Timișoara. And we have started working on Vox Mundi 2020.