buchARTest: How a group of young people brings color to the streets of Bucharest 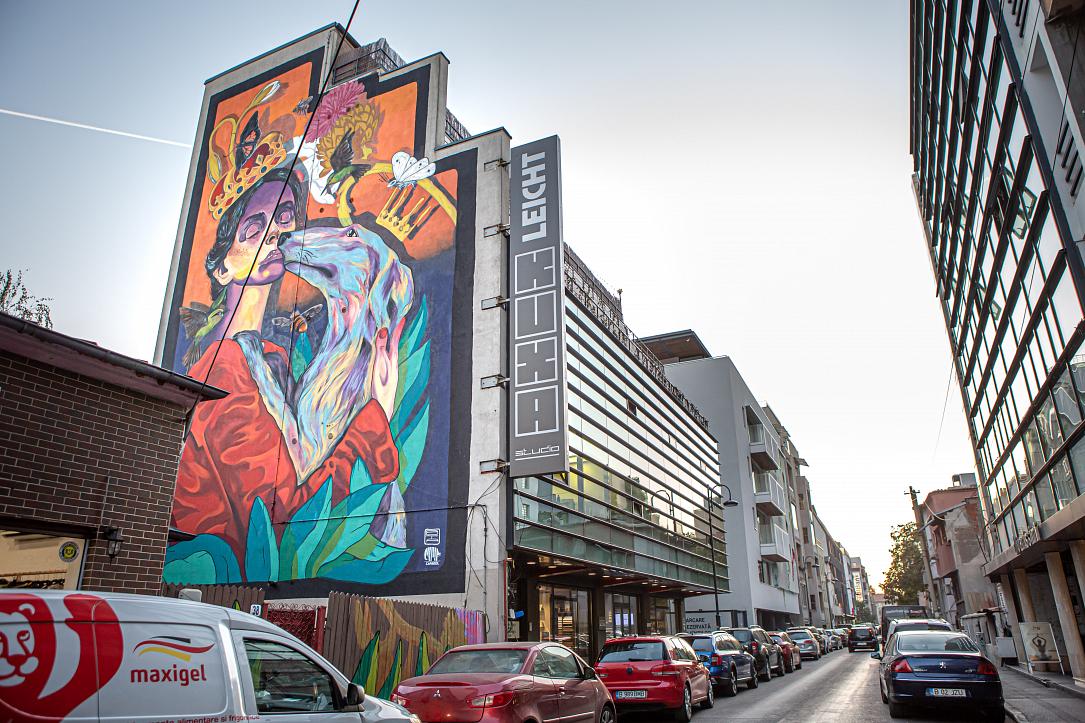 In September of last year, an urban regeneration project that aims to breathe new life into the city and the community with the help of mural art first started to take shape. buchARTest, as it is called, is focused on street art, community, and education. While it began as part of a leadership program, it is now a long-term project bringing a facelift to various parts of Bucharest.

So far, the young team of buchARTest has worked to set up several murals around the city: Love Them as They Love You by BTACREW in Dorobanți (Puțul lui Zamfir St.), Eu cu cine votez? (Who shall I vote for?) by Andrei Felea, Suflu Interior (Inner Breath) by Silvia Dumitriu (D’SIL ART), and Captivitate Urbană (Urban Captivity) by Maria Borțoi, all on Arthur Verona St., close to Piața Romană. They also held a mural art workshop and launched a call for works exploring the theme of forests, the results of which are to be seen in the city’s Romană, Dorobanți and Universitate areas. Their work was recognized at this year’s edition of the Social Impact Award Romania, where buchARTest was one of the three winners. In the Q&A below, buchARTest founder Livia Florea told Romania Insider more about the project, from its early beginnings to the challenges of the present.

How did the idea of the project come about?

It started as part of a leadership program – Leaders Experience. Implementing a social project in the area of urban regeneration or education for the community was part of this six-month program. Every participant had to develop an idea, so 30 projects were proposed; buchARTest was one of the three projects voted for implementation.

How did the launch go? Were there difficult aspects to overcome?

It was a challenge for us, the nine young people gathered around this idea, with seven weeks to implement it, the seven weeks during which we promised to bring Bucharest five more #buchARTest mural paintings. This meant implementing a model that covered knowing the stakeholders and the costs and sponsorships. Still, the most challenging part was finding the walls.

How does BuchARTest work? What model does it follow?

After the pilot edition in the leadership program, the results exceeded the purposes of the experiment. At the end of it, we were all “stained” with the lively colors of a Bucharest transformed through art. Now buchARTes has turned into a long-term project, and its story develops freely and encompasses as many people willing to get back their city through art as possible. We have recently officially become an NGO.

In less than two months, we have managed to color the first square meters of buchARTest. It would not have been possible without the people and companies that believed in us at the start and helped us make the impossible possible: Open Pub, Mit Clima, Caparol România, Tiab, Scc Erbașu, Mitsubishi Electric, Medis Work - Clinica Medicala Ploiești, Consult Accounting Corimar and Grano.

How do you select the locations where you place the murals?

We strongly believe that, by bringing art into the street, we can offer it to people as a collective good they can use to redefine their city conceptually and emotionally, by strengthening the connection between the concepts of ‘inhabitant’ and ‘place’ and actively involve the community. As such, we do not have a process favoring certain places in Bucharest. We look at the private domains when it comes to the walls, in any area of Bucharest.

Last year, we made five murals: the one on Putul lui Zamfir, three on Arthur Verona street, and the workshop at Open Pub.

Who were the participants at the workshop?

It was addressed to young people passionate about art but who do not work in this area. We want to actively involve the community in the change we bring to the city. This is why we decided to start by offering the needed instruments to create art and understand better what it communicates.

How did the #staipădureacasă call look like? Where will the works be placed?

We received more than 40 concepts, from which we selected the ones allowing us to bring the forest to the city without taking out from its home, to raise awareness of the importance of forests, and to speak about the illegal logging in Romania. The new murals will be placed in the areas of Romană, Dorobanți, and Universitate.

How did the current context impact your work?

We postponed the making of the works. It influenced a lot our collaboration with the artists since it is a lot harder to bring international artists to the country because of the restrictions; identifying the walls was difficult because people were focused on other things.

What other projects are part of BuchARTest?

buchARTest was designed on three development directions. We offer a canvas to established artists to show the social and economic impact art can have in a city, but also to those who are just starting, artists who didn’t take their work out on the street before collaborating with us. We educate the community about the impact of art on the urban environment, and we involve the community in the process of creating street art through mural art workshops and questionnaires seeking to find what Bucharest residents would like to see on the walls in their city.

We are continually looking for new collaboration opportunities. If you know large walls in Bucharest where mural art would find a place, let buchARTest founder Livia Florea know.

What would you like to change or see changed in Bucharest?

With our work, we want to strengthen the connection between the residents of the city and the place they inhabit. We would like to see more openness from the authorities and from the people of the city when it comes to placing a mural on their building. We would like to see more understanding about the subjectivity of art in general and the fact that artists need to be allowed to conceive and generate their ideas; we do not want to limit the artists by changing their concepts as everyone has a different perspective and insight.

(All photos courtesy of buchARTest)