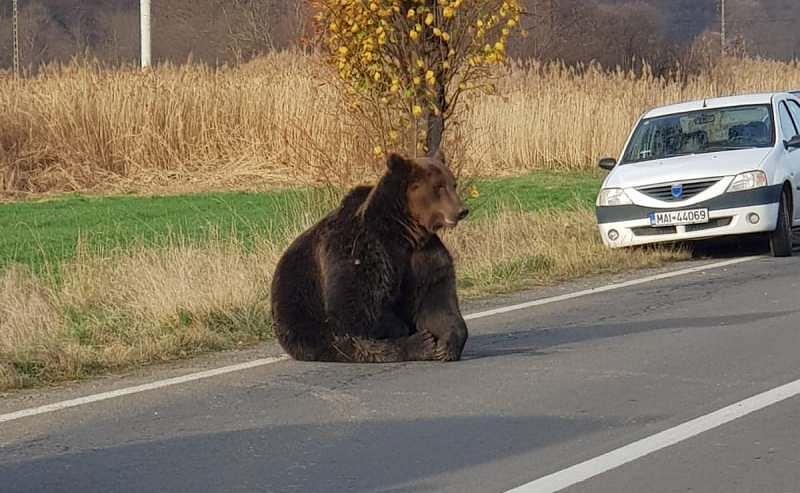 A bear that was hit by a car on the road between Praid and Sovata, in Harghita county, central Romania, was left in agony on one side of the road for almost a day before being shot. The accident occurred on Saturday, around 18:00. Nobody in the car was hurt but the bear had three of its legs broken and couldn’t move.

The bear was shot and removed from the road only on Sunday, around noon, according to Mediafax.

The local authorities’ intervention was poorly coordinated. The veterinary doctor in the area who was called to the site of the accident didn’t have tranquilizer so he had to call a colleague to put the bear to sleep and assess its situation. It’s unclear how long this took, but policemen and gendarmes watched over the bear and traffic on that road was restricted for 18 hours.

Environment minister Costel Alexe said that what happened with this bear was regrettable and inhuman. The local authorities, namely the Gendarmerie and Sanitary-Veterinary Direction (DSV), should have euthanized the bear when they saw that it couldn’t be saved, the minister said.

“I am absolutely outraged, the local authorities had everything they needed legally tranquilize the bear, assess its health and see if it could recover. In this case, the local public authorities passed the responsibility without intervening,” the environment minister told Digi24.

“This situation is in line with the provisions of a Government Decision from 2010, 323, on accidental injuries, captures and killings, and here the legislation is very clear. The Gendarmerie and the DSV veterinary surgeons had to intervene. In this situation, we, the Environment Ministry, shouldn’t have had to issue an order for killing the bear. And yet, I sent the directors today to the Ministry to solve this unfortunate problem. It's inhuman, I tell you honestly, to let an animal agonize as long as nothing in the law has prevented (the local authorities – e.n.) from intervening,” Alexe explained.

Interior minister Marcel Vela announced on Sunday that he initiated the procedure to dismiss the Harghita county prefect for the way the local authorities intervened in this case.

Meanwhile, the president of the Harghita County Council wrote on Facebook that the local authorities should be granted freedom to act in such cases. He claims that the current centralized system, in which the Environment Ministry must approve the killing of any bear, is what caused this situation, according to Mediafax.