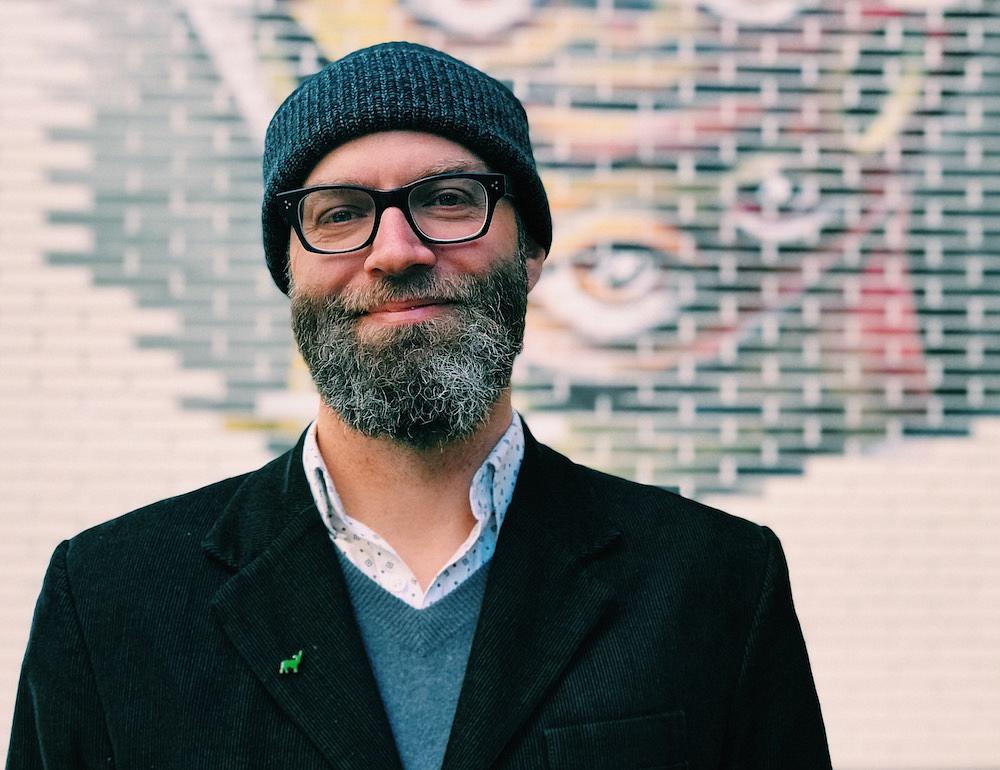 Kirk McDavitt had been craving for a sabbatical for many years. He was tired of teaching others how to write and be creative. He wanted to do it himself. When his wife got a job in Bucharest, they agreed on this: Kirk would finally get his sabbatical in Romania’s capital.

The waiter, a young boy with a hipsterish look, presents the coffee options to one of his customers. “Sorry for my English, I learned it from Cartoon Network,” he adds. The customer replies: “Sorry for the six words that I know in Romanian.”

His name is Kirk McDavitt, a Detroit-born musician and writer, who spent the last ten years teaching. Before that, he worked as a firefighter, paramedic, baker and had some other jobs.

Unlike many foreigners who move to Bucharest for a job, Kirk came here to go away from  his job. He took a sabbatical to pursue his dream of making  a living from writing and creating music.

When we met in a coffee place in Bucharest in late October, Kirk was several months into his sabbatical.

“Basically I’ve gone into the cocoon,” he says.

Sabbaticals have been on a rising trend in the last years. In work cultures that easily lead to burnout, taking six months off or even more is seen as a way to keep your mental health and not get extremely tired or bored with your job.

The percentage of companies offering sabbaticals in the US rose to almost 17% of employers in 2017, according to a survey from the Society for Human Resource Management. Several studies have revealed that time off pays off. Employees return to their jobs feeling better, with new ideas, so the company also benefits in the end.

Most people choose to go to exotic places such as Thailand or India. Bucharest is not on the list of the best places for a sabbatical. It’s a big, crowded city, with people rushing to work, drivers honking every other second. There are no Buddhist temples, no beautiful beaches with fine soft sand.

But Bucharest is also a pretty cheap place, where you can live on a tight budget and create a personal space that is less money driven.

Kirk and his wife moved to Bucharest in the beginning of summer. They live in a quiet neighbourhood where Kirk has his little office. There are cool coffee shops around, and the old university library that they admire in their strolls.

This new life, however, wasn’t as expected. Kirk thought that he’ll easily get into the flow, that inspiration will be right there, at least in the first weeks. But then he realized that this was a job as well. He had to fight the blank page angst by writing at least 1,000 words every day.

Kirk met his wife in Brazil, where he was teaching. Then they lived in Bangkok, Thailand for two years and in New Delhi, India, for four more years. He was a teacher, but he always had a band and wrote poetry and songs.

He sometimes combined this passion with teaching.

At the end of the school year, Kirk wanted to deliver a different kind of lesson. He began by interviewing as many students as possible throughout the day.

“I simply asked for any words, phrases, or ideas that came to mind when they thought about the year as a whole. I took notes on a yellow pad, and, as I did so, the song began emerging from somewhere in the recesses of my mind,” writes Kirk in a Facebook post.

The next day he turned his classroom into a recording studio. One student, Yuval, was keen to sing the lead. Other kids wanted to sing the chorus.

“I can still see the grinning faces of the students who were too reluctant to participate in the chorus as they peered through the window while we huddled around the microphone and collectively howled the chorus over and over: “This is not goodbye, instead it’s see you later! It’s true we’re parting ways and soon we’ll be ninth graders!”

“I wanted to do what I was teaching people to do. I wanna write, I wanna be creative. It was time,” he says.

Then his wife got a job in Bucharest, and Kirk got the chance to do what he wanted.

“I’ve been asking for this sabbatical for the last five years. Finally my wife said: <Here’s your chance. Let’s see what you got,>” Kirk says.

Writing has been the red thread connecting all the moments in his life, whether he was skating in Detroit’s industrial platforms as a teenager, working as a paramedic or teaching in New Delhi’s polluted environment. Poetry, journaling, short stories. He’s recently started working on his first novel in Bucharest.

It is the first time when he tries to transform his hobby into his job. For Kirk, taking a sabbatical is not a just a break, but an attempt to live life differently from now on.

His first novel describes his experience at a Vipassana class in a Southern city in Bulgaria. Vipassana, just like the sabbatical, is also very popular among corporate people, burnout employees, who try to reconnect to themselves. It’s a meditation course where you completely cut off the communication with the external world for ten days. No phones, no internet, no speaking. Kirk has also written a song for each chapter of the book. He’d like to publish the book and the thumb drive with music as a package.

He is now looking for a publisher. This is just one of the variables that is hard to control and creates some anxiety for the future. But at the same time, Kirk knows that he’s lucky. “Super lucky,” he says. He gets to do what he wants.