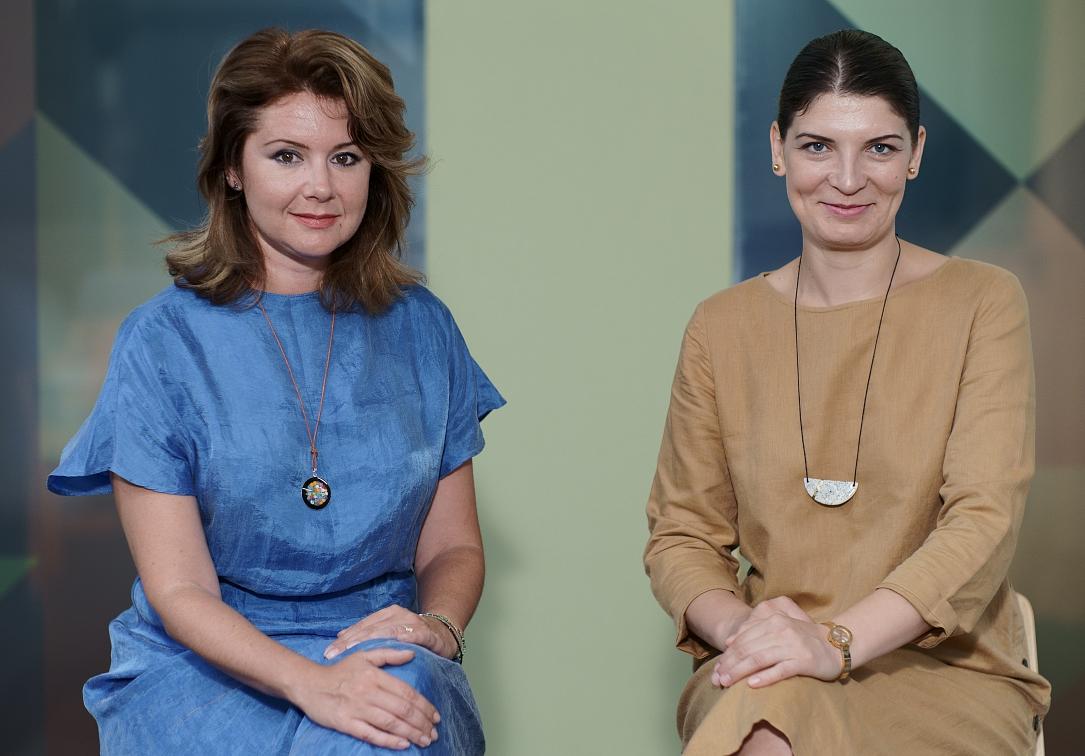 Online shopping need not have such a negative impact on the environment, Romanian-born startup R-Create believes. This is why it offers a returnable packaging solution to be used in the deliveries of online orders. Its founders aim for European reach as they plan to really make an impact.

The idea of the R-Create returnable, reusable packaging emerged as the circular economy looked like the solution to the current economic paradigm, Linda Vasilescu (pictured left in the opening photo), co-founder of R-Create, explains.

After looking at the areas where a circular economy idea would have the biggest impact, they picked online as it is a growing market, something that could be seen even before the Covid-19 pandemic. “We thought about how we could get rid of the resource that is consumed the most in online, meaning packaging, and then we came up with the idea of reusable packaging.”

They took the idea to the ReuseHub accelerator of Impact Hub and won the top prize with it. Afterwards, they started developing the idea, set up the company, and began working.

Was the local market ready for such a product? The R-Create team did a survey among the consumers of one of the largest local online retailers and found out they were interested in the product: more than 77% of the 1,000 respondents declared a preference for returnable packaging. In the meantime, the startup has been working more on foreign markets, where its solution meets increased demand for greener packaging from consumers.

At the time of this interview [beginning of June], the startup was in talks with a client in Austria, where it also received funding for small businesses. “We have a first store here [e.n. in Austria] with which we are trying to see what the workflow would be. It is different from Romania as people here are used to going to postal offices to send various things; they don’t ask the courier to show up at their home. So we are using this flow, which is different from the local one, and we tell people to go to the Post office and leave the packaging there. This is a collaboration we have in Austria, and for this, we received funding from the Environment Ministry,” Linda Vasilescu explains.

The company has also received requests from Germany, in an interest area that covers the DACH countries (Germany, Austria, and Switzerland) and northern Europe.

The founders had a plan for a significant impact and a European reach from the very beginning. “We wanted to do circular economy but not in the way of most niche green businesses. We don’t want to be a niche; we want to have an impact. In order to have an impact, you need a market that is open to this, and these markets are not necessarily in Eastern Europe but in the West. Our plan was to do something European,” Vasilescu says.

Besides the first solution, already introduced on the market, which is similar to a wrapping bag, the startup also developed a box-like solution that protects the content of the delivery. With this, the company can approach 80% of the e-commerce market, the co-founder explains, pointing to the objection they received that the content might be damaged during transport. 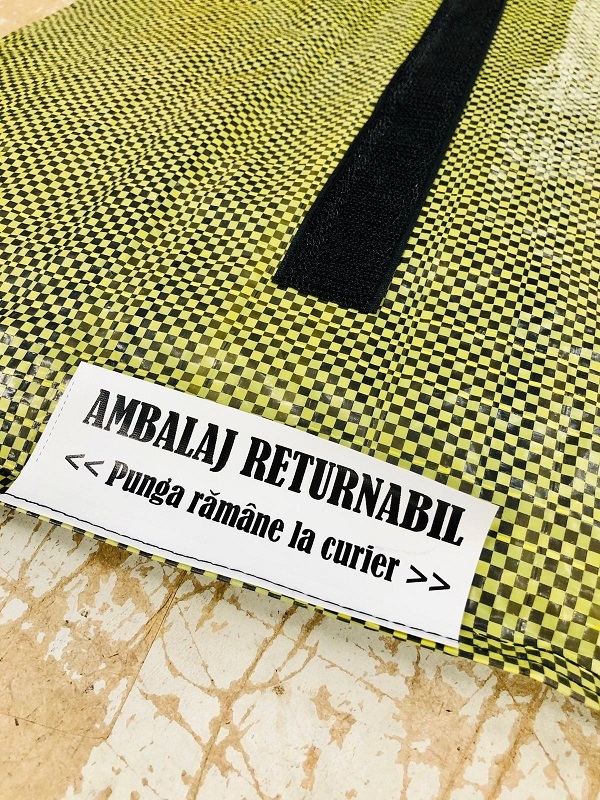 A new way of working

When ordering from partner stores, clients can choose the option of having their order delivered in returnable packaging. Instead of the classic packaging, the store packs the order in the R-Create packaging, which needs to find its way back to the retailer.

“The main challenge we have now when we talk to an e-commerce store that would introduce this [R-Create] option is that they are not replacing a box with another box, but with another way of working, speaking of the circular economy we mentioned earlier. Instead of the box they purchase now, they pay us a fee to rent the packaging, we don’t sell them. This makes things easier because they don’t need to be concerned with them, they don’t need to trace them as we trace all these things through our digital platform; they don’t need to worry about how many there are in stock because we see how many they need and send them, so there are enough all the time; still, there is this return sequence. The packaging needs to return, and this is the area where we are working on to build a system that is sufficiently efficient for them that it costs little – that the return of this box costs little,” Vasilescu says. “If it costs as much as any package, then the process is too expensive, and we end up selling a green but very expensive product; we don’t want to do this.”

The digital platform developed by R-Create gathers information from several sources to help trace the packaging, how many can be used, or how many are at the end of their life cycle. “With this, the e-commerce stores outsource to us all their packaging [operations],” Vasilescu explains. “They only need to design a checkout option allowing clients to select this type of packaging; afterwards, our platform sees everything that is going on – how many were delivered, how many clients requested them, how many returned them. […] It coordinates everything related to the packaging flow. For online stores, it means they can have a solution easier to use than the single-use packaging, where they need to check every day how much packaging needs to be ordered, order it from the provider, take into account the time for delivery, and the storage space. With us, there is no need to keep this stock, only a stock for around three days is needed because they return, through the courier flows, to the online stores. There are many operational advantages when working with reusable packaging compared to the single-use,” Vasilescu says.

One category of beneficiaries of the platform is made up of e-commerce stores, while the second are couriers. “At this point, courier players, besides transporting the packages, also offer the online stores the packaging. But they offer traditional packaging. Now, this is a new line of business for them, so to say, renting reusable packaging [to stores],” Vasilescu explains.

“It is outsourcing on this side, it’s just that we don’t distribute packaging pallets, which take up half of a storage’s area, but they clear up this part, and it becomes a return flow. When multiplied with any number, especially large figures, there is a difference from the money blocked in stocks to the area blocked by stocks; this besides the fact that, at this point, there is this eco-tax to introduce packaging to the economy which disappears,” R-Create co-founder Adina Huma (pictured right) says.

“The digital platform allows all these benefits to occur in an automated flux because it wouldn’t work on large numbers without this platform which brings together information from various parties – the courier in charge with the delivery, the post office that collected it – I was saying that this is how we do things abroad – the online store, and so on. If it weren’t for this platform, the process would not take place in a smooth way,” Vasilescu explains.

While in talks with companies from abroad, the two founders have noticed heightened interest from companies, whose clients demand greener packaging. “E-commerce players don’t need convincing that the solution that leaves no packaging after an online order is better and more interesting for the final clients. They know this. They reach out to us because they were looking for this; their clients were asking them to put less plastic or less filling and so on. So there is less persuasion work,” Vasilescu says. “Big players have departments specializing in sustainability on the packaging side […] They have a department that non-stop looks for and tests solutions,” Huma explains, pointing to a shared language.

The start of the state of emergency introduced in mid-March last year because of the Covid-19 pandemic overlapped with a part of the startup’s plans to announce the partnership with bookstore chain Cărturești and with expected financing that fell through, but it was also a test that proved that it could act in a time of crisis and continue its development.

“We were in a quite advanced phase, the third or the fourth round of discussion for investments with a term sometime in April; it was clear nobody knew anything in April [2020], and we suspended the talks. As they say: in clear waters, anyone can sail; somehow, we reorganized right away, we redid a launch in May, which was very well received. In the end, the second timing worked out, and we received a financing a few months later, somehow we pulled through,” Huma recalls. “Circumstantially, it was bad, but overall it was good because it made us realize we are able to react in a crisis and get back on our feet,” Vasilescu says.

When it comes to the experience of starting the business, the two founders reference their previous entrepreneurial experience as a help, as well as the novelty aspect the product brings.

“The enthusiasm of the beginning always propels you, but we also have a background where we’ve been through the entrepreneurial experience, which helps somehow with sizing up the energy and effort into a certain direction. It helped us that it is something novel, so the information was disseminated quickly. On the other hand, it is a disruptive process, a process involving many entities that need to coordinate, and it is a disruptive process we are still engaged in. It is both: it’s exciting, but it is not easy; on the other hand, as they say, if it were easy, everyone would be doing in,” Adina Huma explains.

On the other hand, there are misconceptions to dismantle and education to be made. One perception they were faced with often was that their work is similar to the one of an NGO, a perception surrounding green businesses overall, they explain. “We want to do something green, with a good environmental impact, but by proposing something attractive as a price: you pay to receive a service that is at the standards you had before, it just doesn’t harm the environment. This is what we are trying to do, and this is the misconception we have to fight,” Linda Vasilescu says.

And educating the market comes with the territory of a business that disrupts existing processes. “We reached the conclusion that the market is at a point where the education needs to be made first; what we do now is find the clients, tell them what it is all about and disseminate a way of working so that others understand and also reach out to us,” Vasilescu says. “Although we say that at this point we are a B2B company we also do, among other things, B2C education, of the final consumer and of the online stores. Without having someone to have paved the way before, we need to do all these things.”

Eyes on the prize

At the end of June, R-Create was one of the three finalists of the 2021 Postal Innovation Platform Startup Award in the eCommerce, Retail & Cross-Border category. R-Create will next present their product during the live startup competition to take place on October 12 at the Parcel+Post Expo in Vienna, Austria. The ideas and solutions in the competition are judged by criteria including innovation (identifying new, so far unmet customer needs and ability to address those needs), value (unique value proposition, good cost-benefit ratio and robust business model and market entry strategy), and impact.

The startup plans to focus this year on development and finalizing the first version of the platform, as it sets its sights on local partnerships in areas such fashion and small furniture retail, outside of the book sector covered by the partnership with bookstore chain Cărturești, and trialling various partnerships outside of the country.

In the meantime, the R-Create team is open to communication about its solutions and can be contacted here.

(All photos courtesy of R-Create)