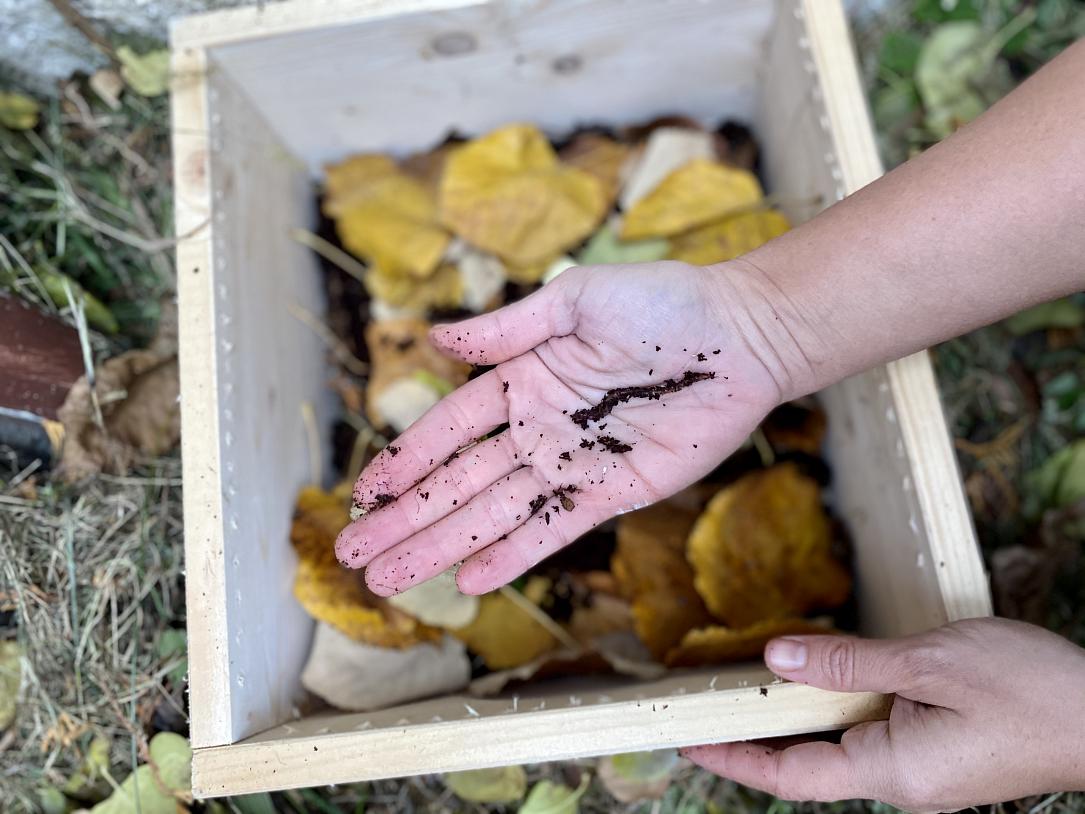 Urban Cultor, a Bucharest-based initiative started last year, works to set up a range of urban gardens and rolls out a project that aims to show how composting can work in urban areas.

Last year meant a new project for a group of French and Romanian friends and professional partners who established Urban Cultor, offering various urban agriculture, gardening, and composting solutions as well as introductory workshops and events on these topics.

“We are four founders. We have been friends and partners in professional projects since 2010. If before we each practiced urban gardening, bio-intensive agriculture or composting in our own corner, in 2020 we decided to invest our skills and experience into a common goal: raising awareness among citizens and local authorities and getting them involved in projects such as community gardens, company gardens, and shared composting spaces. Our ideas are supported by a team and by partners active in areas such as urbanism, architecture, agronomy, landscaping, or composting,” co-founder Cristina Briziou explains.

It is active in Bucharest for the moment, where many venues could benefit from or accommodate urban gardening solutions. “We started in Bucharest because we are all here and because there are very many venues that need rethinking and refurbishing, but we don’t rule out projects in other cities in the country. We appreciated very much the reaction of some partners in Cluj, for example.”

The pandemic offered the time for reflection and the spark to start the project. “I guess we had a bit more time to think about what is truly important for us, our families, and the city we work and have fun in. We were motivated by the reactions of those around us. A few young corporate employees launched various projects by withdrawing to rural areas, or worked from home, spending more time on their balcony or in their personal garden. Gardening has many proven advantages: it lowers stress, increases the feeling of personal satisfaction and relaxation levels, promotes movement and physical exercise. We are positive and have seen the good side of things despite this sanitary crisis.”

Urban Cultor came “as a natural reaction aiming to change, with small but decisive steps, the everyday reality,” Briziou says, pointing to a series of issues.  “In large cities in Romania, the green area per inhabitant is well below the European average. Although by 2013, the green area per inhabitant had to reach 26 sqm, according to national laws and European Union norms, even in 2021, we are far from this number. According to Greenpeace Romania, the most recent data from 2014, show that Bucharest has 9.86 sqm of green area per inhabitant, for instance. We are consequently faced with a series of serious problems leading to an increase in the number of people suffering from cardiac and pulmonary illness or allergies. We are talking about the thermal discomfort we all experience every summer, caused by the phenomenon of the heat islands. The huge quantities of CO2 and heavy metals and an increasingly large volume of water accumulating on the streets from torrential rains add to this. There is not enough green space to create a balanced microclimate in cities or to capture excess water,” she explains.

At the same time, people need to be as close as possible to what they consume, she says. “We need fresh produce, local, grown responsibly. We need healthy, seasonal food. We can grow in cities especially vegetables and fruits that are consumed fresh and cannot be kept for a long time without being treated, such as aromatic plants, salad, spinach, cherry tomatoes, strawberries.”

Urban agriculture offers a solution to the issues above, she says. “It has economic advantages, offering food for local markets, social advantages, offering venues for community and education activities, climate advantages, creating green areas that capture CO2, excess water, and offer a refuge for biodiversity. More than this, urban agriculture offers a method to recycle biodegradable household waste through composting. Urban Cultor’s mission is to promote these good practices.”

She gives the example of European countries such as France, Belgium, Poland, where urban agriculture is practiced in peri-urban farms, micro-urban farms, specialized urban farms such as the ones for microgreens or mushrooms, as well as community gardens, collective gardens, or cultivated areas of the edible landscape type. 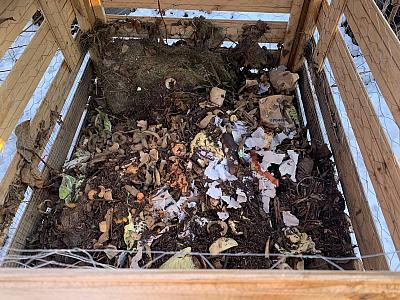 One of Urban Cultor’s recent projects is Food for the Earth - Composting Communities for Climate. Aimed at raising awareness about composting in urban areas, it is rolled out in a partnership with Our Neighborhood Association for Sustainable Practices in Bulgaria. At the end of last year, it won a EUR 10,000 seed funding from EIT Climate-KIC and Ashoka Romania at the Climate Community Lab.

“It will be set up in a public area; we had to convince the local authorities, to receive the authorization and motivate 30 families to be part of this pilot project. We had all sorts of reactions, but we noticed that through explanations, people open up and want to contribute. More than that, we were surprised to see the number of those interesting in composting, in reducing waste, in general, is higher than we thought,” Briziou explains.

The project will be implemented in April in Bucharest. “We will evaluate the results, and we will try to create an economic model on a wider scale. We believe it can be done, especially with logistic support from the authorities.”

The funding received will go into raising awareness among citizens and local authorities on the topic and in implementing two in situ composting sites, one in Bucharest, the other in Sofia. “The aim of the project is to prove that it is possible to compost in the urban area to diminish the quantity of biodegradable organic waste that reaches the landfill or the incinerators. The fact that composting is done locally, where the waste is produced, diminishes the quantity of greenhouse gas emitted during the transport. We will communicate more about the location and the events that will take place starting in March. The topic of waste is quite sensitive at the moment, but we are confident that the authorities will include composting as an option to make use of biodegradable waste. It is important that people learn what gets composted and what not in an urban area and make a habit out of it.”

When it comes to composting, the company has a range of products, including composting boxes for families or a combination of three boxes for shared composting spaces for a maximum of 30 families. At the same time, it designed a wooden planter box with an integrated vermicomposting container to be used by up to three people.

“Vermicomposting entails using special earthworms that eat every day the organic waste equivalent of their weight. We are not talking about a high volume, but we can compost every day the peel of a banana or an apple. It creates a certain feeling of satisfaction for users. The resulting compost can be spread in the planting box where aromatic plants or flowers can be planted,” she explains. 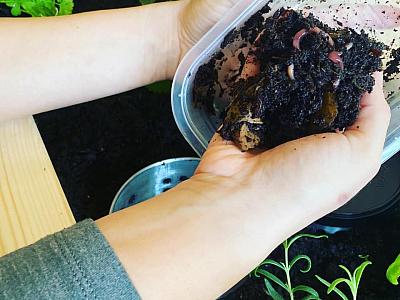 It is also looking for solutions for mechanical and electro-mechanical composting and vermicomposting for entities that need to compost large quantities of biodegradable waste in partnership with vegetable farms in the peri-urban area that could take over the resulting compost.

The company’s clients in HORECA and retail sectors are the most interested in composting solutions to reduce the quantity of biodegradable waste. “The associations of owners [of flats] who wish to reduce the cost of their waste disposal bill for the wet waste segment follow the same line. We collaborate with a part of district city halls on counseling regarding the composting of vegetal waste.”

The potential of urban gardens

At the same time, it wants to draw the public’s attention to the potential of rooftop urban gardens. “We are particularly attached to rooftop urban garden projects. We want to interest as many companies as possible to create such an area for their employees. At the same time, educational and sensorial gardens attract private educational institutions that want such an area in their yard to draw the attention of children. We offer maintenance products and services.”

As most roofs in the city are flat, there is broad potential in Bucharest for rooftop gardens, the co-founder explains. “Bucharest has, I repeat, an enormous potential for rooftop gardens because most of them [e.n. the roofs] are flat. We need well-isolated terraces which can withstand a weight of minimum 350 kg per sqm. Aromatic herbs, strawberries, cherry tomatoes, leafy vegetables can be grown here.”

Many of the city’s existing green areas can accommodate urban gardening projects, she says. “At the same time, in parks, raised beds in a permaculture system can be set up to cultivate anything. An interesting model is the collectivity garden set up in Nantes at the initiative of the City Hall in 2020, where vegetables and fruits were harvested then donated to the NGOs involved in working in shelters and with underprivileged families.”  In Nantes, a city on the Loire River in western France, 50 sites throughout the city covering 25,000 sqm were turned into vegetable gardens in the project Paysages nourriciers, born as a response to the coronavirus crisis. 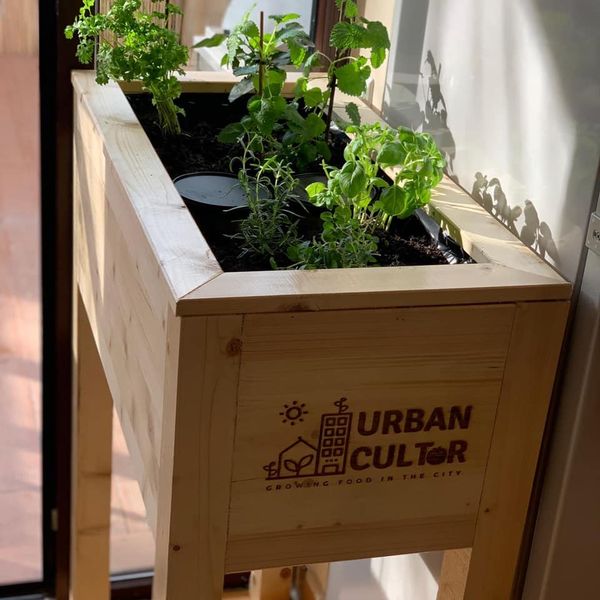 People who wish to practice urban agriculture can either take the option of the raised beds with the help of planter boxes on their terrace or balcony or take part in activities in collectivity gardens or rent a plot of land in a community garden, she says, pointing to GrădinaR as an example of such a project of a community garden in Otopeni.

With its solutions and products, including a variety of wooden planter boxes and composting boxes, design, implementation, and maintenance services for urban gardens, and training and workshops for employees on topics such as urban agriculture, composting, healthy living and zero waste, Urban Cultor targets businesses and individuals but also educational institutions. “For those who have the chance to have a garden but do not want turf and flowers, we offer counseling on the setting up of easy-to-manage edible landscapes. A large part of the Romanians who are over 30 grew up in the countryside, and this can be seen in the openness they have towards gardening. It would be a pity not to stimulate these skills and knowledge to create areas where we can be closer to nature in cities.”

The pandemic brought the challenge of work from home and the closing of schools, but the team is confident that things will eventually work out for the better. “We are just starting. For the time being, things are going in the direction we want. The main activity of Urban Cultor is to create edible green areas and gardens for the employees of companies with offices in the middle of the city, regardless of the available spaces and the access to the substrate. The urban gardening structures can be rented or purchased. We offer maintenance but also introductory workshops on gardening and related topics for groups. We propose the same type of services to schools and kindergartens out of the wish to “grow” people for the future: sensitive to the preservation of resources and biodiversity. With the sanitary crisis, we were a bit challenged by the home office practice and the absence of children from school, but we are confident that things will work out for the better. The city has its resources and, put to use the right way, they can create a closed circuit: healthy soil, more green areas, less concrete, local food for resilient cities against the background of a changing climate.”