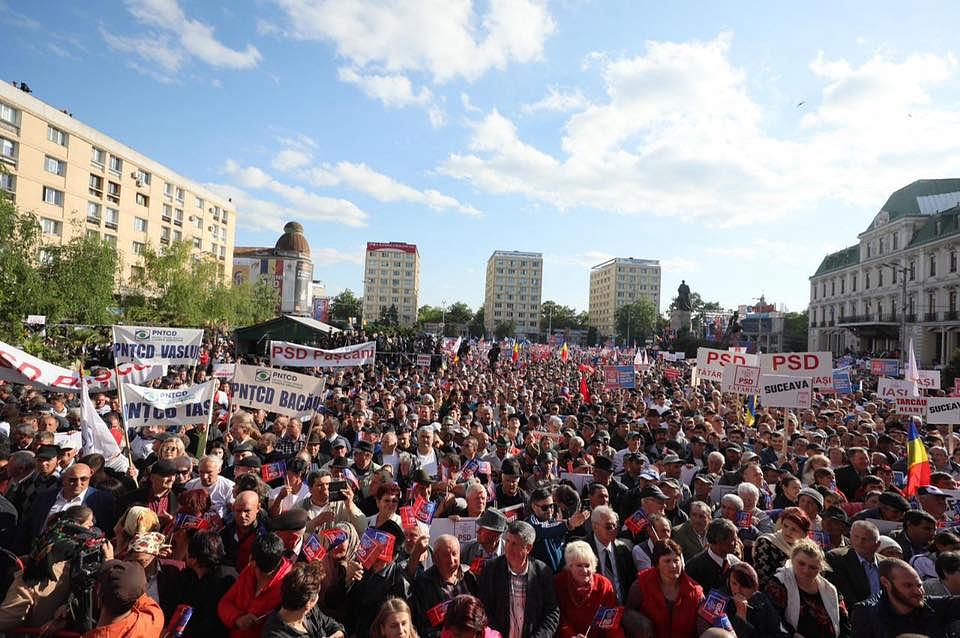 Iasi, one of the biggest cities in Eastern Romania, was blocked for a few hours on Thursday, May 9 – Europe Day, by the electoral rally of the ruling party PSD (the Social Democratic Party), but also by the thousands of protesters who gathered in the central area of the city to protest against PSD and its leader Liviu Dragnea, and against the government.

PSD organized an electoral rally in Unirii Square in downtown Iasi on May 9, despite critics coming from the opposition parties and some civic organizations, which said that organizing a political event on Europe Day is inappropriate. However, although the ruling party was hoping to bring 40,000 supporters and members to Iasi for the rally, the number of participants was much smaller, of only about 10,000, according to the local media.

Meanwhile, protesters also gathered in downtown Iasi, chanting slogans against the PSD leader Liviu Dragnea and the party. The gendarmes present at the event decided to keep the protesters away from Unirii Square, where the PSD rally was taking place, and installed two rows of fences between the protesters and the PSD supporters, local Stirileprotv.ro reported. The number of anti-PSD demonstrators grew constantly during the day, so that by the time the PSD rally ended, about 6,000 people were protesting against the ruling party. They occupied the main square once the electoral rally was over, continuing their protest.

The anti-PSD protesters booed the PSD supporters as they were arriving at the rally, but also after the political event ended. Participants of the two sides even met face to face for a moment after the rally, but no serious incidents took place.

Liviu Dragnea and several of the party’s candidates for the European Parliament elections addressed the crowd of supporters during the rally, from the stage installed in Unirii Square. During his speech, the PSD leader continued his attacks against president Klaus Iohannis but also referred to the protesters who were chanting slogans against him nearby, whom he called “people without land or God,” Digi24 reported.

“More than ever, Romania needs today what it lost during the Basescu (e.n. former president Traian Basescu) and Iohannis regimes. It needs patriotism and patriots. We all need a homeland, because our country has forgotten to be a homeland. Basescu and then Iohannis drove the people to hatred and division, they incited people against each other, made the Romanians believe that they are split into two categories and that they must fight each other,” Dragnea said.

He also referred to the measures the government has been taking. “We govern for the Romanians, we raise wages, pensions, bring the doctors back home, restore the dignity of teachers, we build highways,” Liviu Dragnea told the crowd, according to Stirileprotv.ro. He also said that the PSD is sending “Romanians who are patriots” to the European Parliament, people who are “determined, young, courageous, who will defend their country.”

The PSD rally ended after about four hours. Soon after, Iasi mayor Mihai Chirica, who was excluded from PSD last year after criticizing the party leader on several occasions, shared on Facebook several pictures from Unirii Square, showing the mess the rally participants left behind.

Liviu Dragnea announced the May 9 rally in Iasi at the end of April, a few days after he attended a conference of the PSD county branch in Iasi. A few hundred people staged a protest against PSD and Dragnea during the conference. G4media.ro reported that, when Dragnea left the event, the organizers brought a brass brand to play there, hoping the music will cover the voices of the anti-PSD protesters.