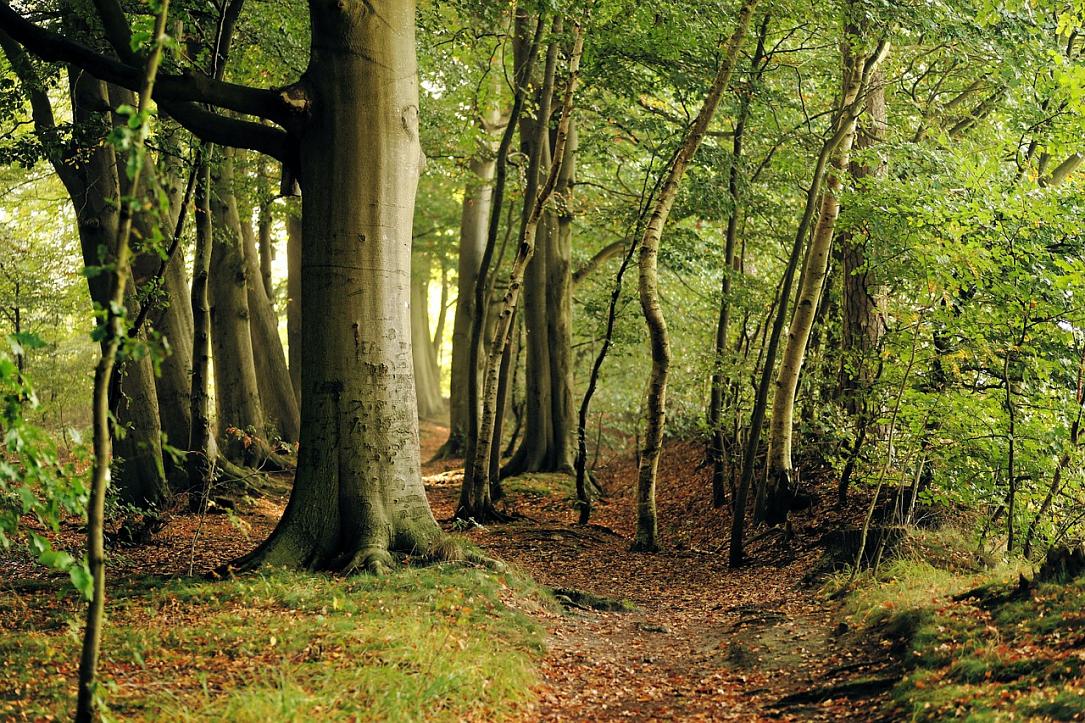 Passing by a beech forest is not something rare in Romania, and people usually tend to not pay attention anymore to these majestic trees. Nevertheless, they do have a great story to tell. Not only that the beech forests play an important part in Romania’s ecosystem, as stable forests with a rich biodiversity, but they are also of very high importance in the economy.

Things to know about the beech forests

The most common beech species found in Romania is the European beech (Fagus Sylvatica). These are large trees that can reach heights of 40 m and can live up to 300 years or more. These forests, single-species or mixed, can be found at altitudes between 400-500 m to 1300-1500 m. However, recent studies have shown that the climate change may increase the maximum limit of these forests by at least 100 m in the next 30 years. This means that the beech could go up to over 1,500 m, in the alpine area.

The beech trees’ toothed parallel-veined leaves are shiny-green but turn reddish-coppery bronze in fall; they are 5-10 cm long and 3-7 cm broad. The trees can produce small quantities of seeds around 10 years of age, but not a heavy crop until they are at least 30 years old. The female flowers produce beechnuts, which are small, sweet-flavored triangular nuts. These nuts are an important food for birds and rodents.

The beech forest is among the most important forests because, compared to other forests, it is shelter to a much richer biodiversity, hosting a large number of plants and animals, from the big predators such as the bears, wolves and lynx, to smaller animals such as squirrels and wild cats, and those we don’t usually see, such as invertebrates and insects. They create stable and environmentally friendly ecosystems. Moreover, when mixed with other species, these ecosystems become even more complex and stable.

Several secular beech forests in Romania were included in the UNESCO World Heritage List in July 2017. They are the ones from Izvoarele Nerei, Cheile Nerei-Beusnita, Domogled-Valea Cernei (in Caras Severin county), the Cozia Massif, Lotrisor (Valcea county), the Sinca secular forest (Brasov county), Slatioara secular forest (Suceava county), and Grosii Tiblesului and Strambu Baiut (Maramures county). These forests occupy a surface of almost 25,000 hectares and most of them are managed by the state company Romsilva. However, the state-owned company manages less than half of the total national forest fund.

Then, there is the Natura 2000 network of nature protection areas. With Romania's entry into the EU, one of the conditions was to create in the country a network of naturally protected areas. Called Natura 2000, this network has as a basic principle the protection of a series of species and habitats that are considered important at European level. As a result, a minimum of protection conditions must be respected in areas of single-species of mixed beech forests included in the Natura 2000 network. Those who manage these forests are not allowed to affect the habitats for which these areas have been declared naturally protected areas, and the habitats and species of community interest in general.

In July this year, following an emergency ordinance adopted by the government, the management of the natural protected areas in Romania passed under the authority of the state National Agency for Protected Areas (ANANP). However, this move has raised some controversies, as the emergency ordinance removes the notion of “custodian” of protected natural area from the management process. The custodians of protected areas in Romania were mainly NGOs, but also city halls, county councils, universities and companies, which managed these areas with their own sources, based on a contract signed with the state. Several NGOs and environment activists have criticized the government’s decision, saying that the change was done rapidly, without consultation, leaving things unclear. Some of them, including the Federatia Coalitia Natura 2000, said they would challenge the current form of the ordinance. They hope that, when enforced, the ordinance would include some changes agreed by all the parties involved, for a better solution.

The illegal and uncontrolled cuts represent one of the biggest dangers for forests in Romania. Illegal cuts have affected many thousands of hectares of forests in Romania in the last 15-20 years, including thousands of single-species and mixed beech forests. In some cases, all the trees were cut on large areas. For example, there have been owners who have completely cut the forests they owned.

In 2016, the Environment Ministry launched Inspectorul Padurii (the Forest Inspector), a mobile app that allows citizens to track timber transports. Users can determine if a timber transport is legal or not, and alert the authorities if it’s the case. Figures showed that civil society involvement played an extremely important and unprecedented role in identifying and reporting cases of illegal cuts.

The same year, Greenpeace also launched an online platform where anyone can report cases of illegal logging. On Salveazapadurea.ro, people can report any case of tree cutting that seems to be illegal. In addition, the website also provides useful information and instructions on how to recognize an illegal cut, and what information to collect on site in order to prepare a proper documentation for the notification to be sent to the forestry departments and the Forest Guards.

The economic importance of the beech trees

The wood of the European beech is easy to work with, being particularly well suited for minor carpentry, particularly furniture. The beech wood is also considered one of the best firewoods, which are extremely important for the Romanians who are still using firewoods to keep their houses warm in the cold season.