Romanians abroad: From a small Romanian town to Harvard and to helping people immigrate to the US 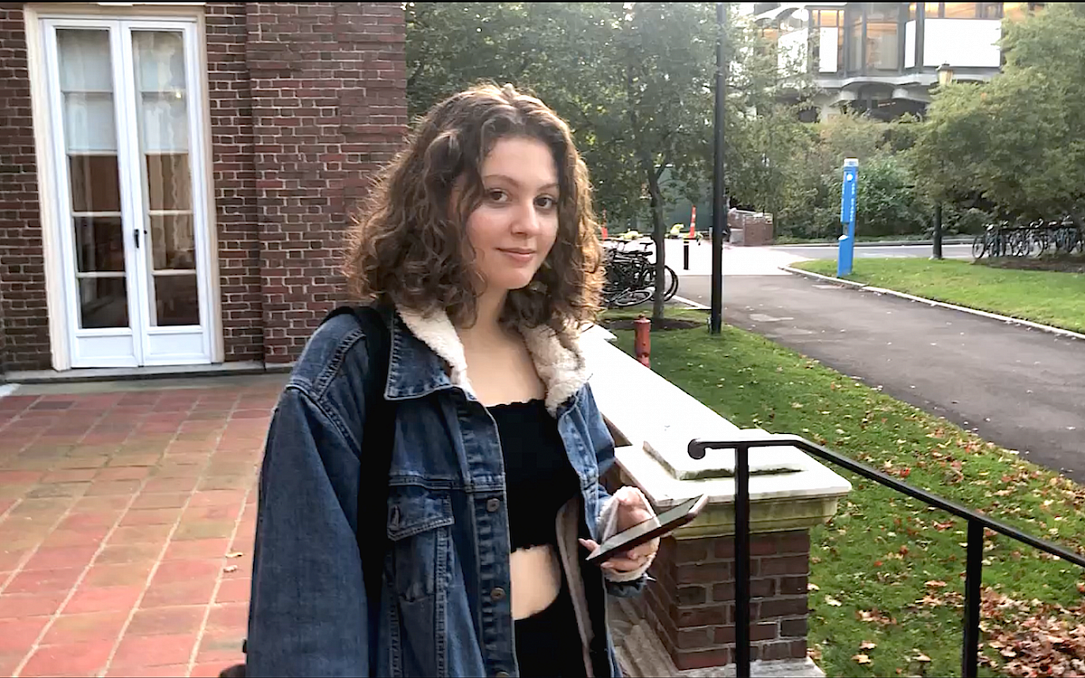 Born and raised in one of Romania's poorest counties, Lavinia Teodorescu is now living "the American dream" as a student at Harvard. And when she is not studying or dancing, she is working with the Immigrants Like Us team, helping people from around the world with the lengthy and complicated process of immigrating to the US.

Lavinia Teodorescu, 20, was born and raised in Rosiori de Vede, a small city in Teleorman - one of Romania's poorest counties. She was 13 when she moved to the big city - Bucharest. Years later, she got to discover even more of the world, as she was accepted to Harvard, one of the best universities in the US. And now she is helping other people immigrate to the United States of America, together with the team from Immigrants Like Us.

___STEADY_PAYWALL___
We've talked to Lavinia about her path, from her hometown all the way to the US, about what she thinks got her into Harvard, her plans to return to Romania and her contribution to the lives of people who want to immigrate to the US. We also uncover the story of a Romanian who moved to the US with support from this NGO.

Lavinia Teodorescu started her education in her hometown, where she also discovered her passion for math. In fact, she went to the National Math Olympiad four years in a row, from 5th to 8th grade. Looking back now, she says these Olympiads were probably the "coolest" thing for her back then, as they gave her the opportunity to know students from other parts of Romania and visit big cities across the country.

But it was also at one of these Olympiads that she found out about a high school in Bucharest that prepares students for International STEM Olympiads, called ICHB. She decided that this is where she wanted to go to high school. A big dream that required her parents to make significant financial efforts. But they decided to take a bank loan and register their daughter to go to ICHB. That's how Lavinia started a new chapter in her life, moving to Bucharest with her grandmother at a very young age.

"I technically moved out of my parents' house at 13, and that took a toll on my academics. I was in a big city, and I realized how much harder it was to win in competitions here. All of my classmates worked 6-7 hours per day for their subject of interest – math, chemistry, or physics – but that became boring and uninteresting for me. I tried to switch from math to chemistry, but that was not great either, and I felt like my dream to participate in an International Olympiad was shattered," Lavinia told Romania-insider.com.

In the meantime, she got back to another one of her passions - dancing - and joined the high school's Turkish folklore team.

"A few months into the semesters, my principle found out I started dancing, and he was, to say the least, very upset. ICHB was giving me a scholarship to study chemistry, and I was spending my time dancing. However, I decided to continue dancing and fell in love with it that year. My team went to the International Turkish Olympiad, and we won the silver medal. For the first time in high school, I felt like I was spending hours in my day doing something I loved," she recalled.

"It was only then that I decided I want to go to the US for college. The truth is, I wanted to go to the US because I was watching a lot of movies and TV series based there, and life just seemed so much better and full of opportunities."

Fast forward to her third year of high school, Lavinia discovered she liked to organize events - anything from Model UN to parties and social impact events. One year later, she built ASET (European Youth Association) with her best friend - a legal platform that any high school student can "borrow" and create an event under its name. She also created ProVot – a Model Romanian Parliament, and around this time, she also discovered her interest in history and politics and began to study that. In the meantime, she was taking all the exams necessary to apply to the US – the SAT and TOEFL – while continuing to dance full time.

"In the fall of my senior year, I realized that I didn't know exactly what I wanted to study in college, which is why the US was my best shot. I could just go and study anything I wanted and change my subject of interest many times over," Lavinia said.

She applied to 21 universities, and one of them was Harvard. And, as she says, she was "extremely lucky" to be accepted at Harvard.

"My essay for Harvard is the same one that I sent to 7 other universities, all of which rejected me. I had good grades and scores, but I don't think that has anything to do with why I got in. Someone told me once that every year, Harvard is building an orchestra – a group in which everyone is playing one instrument, and it is the best at playing that one instrument. No one plays all instruments, and whether or not you are accepted into the orchestra depends on the other instruments already there and if you match with them. What I mean by that is that I was extremely lucky to be accepted – it simply means that my talents and interests were a good fit for the Class of 2022," she explained.

"Now, I must admit that I worked hard to do the things I love – dance, organize events, and study politics – but I wasn't good at everything, and I certainly wasn't the best at math or chemistry. In my application, I was honest about my interests and did not try to be someone I am not. I wrote about Teleorman and my life in one of the poorest counties in Romania, and I wrote about my feelings while dancing on the big stage. I think that's what they liked about me: I was frank and honest, and I truly loved every bit of what I was doing."

Lavinia says that studying abroad for at least a year can be life-changing, and she also has some advice for other young Romanians planning to continue their education in other countries: "If you plan to do college abroad, then my biggest advice is to start early. Talk to people that study in the country you want to go to. Ask them how it is, ask them what problems they encounter. Talk to people who came back to Romania after college. Figure out why they came back. Just do your research and only then start applying."

Now in her third year of study at Harvard, Lavinia is doing many of the things started in Romania. She is still dancing, for example, being part of the Harvard Modern Dance Company. She also joined the founding team of Immigrants Like Us, a nonprofit helping immigrants complete their forms and apply for legal status in the US because she "saw the long and difficult process that immigrants have to go through in the US."

"Back in Romania, many of my friends and professors had to immigrate from Turkey to Romania, and I remember the problems they encounter with the legal system. Many were separated from their families in the process, and in the US, I have a lot of friends who experienced the same problems."

Lavinia wants to return to Romania one day, and support other young Romanians in achieving their dreams. Until then, she would like to work in the US for a bit, maybe a year or two, and then do her grad school (Masters and Ph.D.), also in the US.

Immigrants Like Us is a Harvard-based nonprofit that helps people prepare their immigration forms and apply for legal status in the US, for free. They have to go on Immigrantslikeus.org and take a pre-screening questionnaire to check what immigration visa they are eligible for. They answer some simple questions, and the program fills out the necessary forms for them and sends the package to be reviewed by an attorney. After being reviewed, all the forms and documents are sent back to the user, ready to be printed and with instructions on where to send them.

The Immigrants Like Us team includes lawyers and tech engineers. Lavinia Teodorescu is also part of this team, heading up the outreach efforts to make immigrants aware of this service. This means she is reaching out to community leaders, media outlets, and nonprofits, explaining how this service works in order to reach and help more immigrants.

The organization has helped users from all corners of the world, including Romania, Bulgaria, Colombia, Venezuela, Ukraine, and Mexico, among others. One of them is Mircea Oprea from the Romanian city of Ploiesti, who is applying for a Marriage Green Card.

Mircea spent 12 years of his childhood in a small town in the region of Oltenia called Ticleni. He then moved to Galati, as his father had to relocate there with his job. Here, he started volunteering at the US-based "Word Made Flesh" Foundation, which supports and helps marginalized children coming from low-income families. Many years later, Mircea got to meet his future wife, Harper, through this foundation.

Harper is from Billings, Montana. She came to Romania in 2015 through the University of Newberg, to study a whole semester at the "Word Made Flesh" Foundation. This was when she met Mircea, and the two decided to get married in the summer of 2018. They moved to Belgium next, where Mircea found a job as a naval architect. However, after Harper's failed attempts to find a job that would allow her to practice what she studied, they both decided to move to the US.

But immigrating to America is not easy. After much research and talks with friends who have already gone through the lengthy process of immigrating to the US, Mircea got a message on social media from Immigrants Like Us co-founder Jonathan Petts, who invited him to try the services of his nonprofit, free of charge.

"He told me that they could help me prepare all the documents at no cost. I was surprised because, besides the costs for the green card (around USD 2,500), you also have to take a few thousand dollars out of your pocket to hire a lawyer for this process. It is a rather expensive and long process, and without help and a lot of information and research, you will only end up wasting money, time, and risk starting everything from scratch," Mircea Oprea told Romania-insider.com.

One of the lawyers at Immigrants Like Us has been helping Mircea with preparing the documents needed for the immigration process, and the Romanian said this was very helpful. He now recommends other people "who don't have thousands of dollars to hire a lawyer" to try this platform.