Two Americans get stuck in Romania during the COVID-19 lockdown: We believe Romania is a hidden gem! 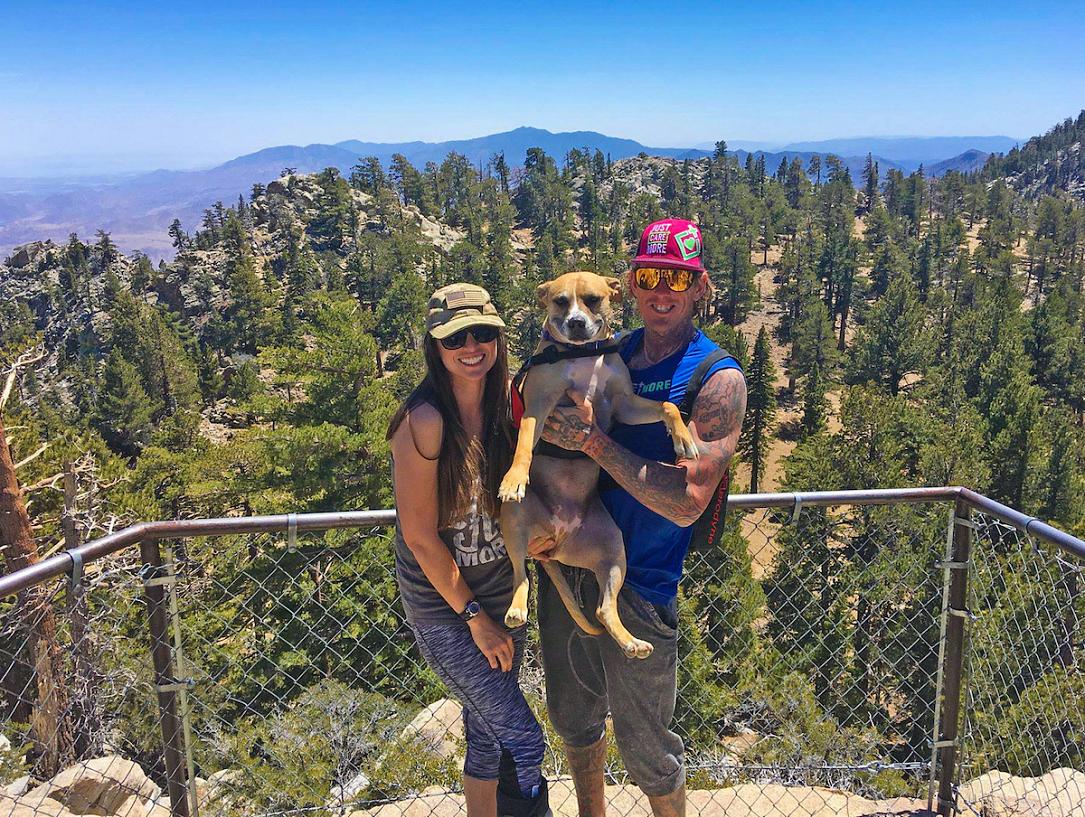 While most people were forced to stay at home during the coronavirus lockdown, two American daredevils found themselves trapped in Romania. But being stuck in a foreign country was not all bad news for the two. They got to discover Romania's natural beauties and further plan their daring dream of becoming the first people to fly a parachute in every country of the world.

Jamie Leibert, also known as Captain Manicorn, and his partner Sandra Zinovyev arrived in Romania in November 2019, after driving through several European countries in a campervan. But their plans changed when the new coronavirus (COVID-19) pandemic hit, closing the borders and forcing them to stay here much more than initially planned.

They are both passionate about adventure travel and air sports, spending most of their time outdoors. Last year, they decided it was time to discover Europe as well, accompanied by their dog Freedom. That's how they ended up in Romania. They are currently living in the small mountain town of Breaza, about one hour north of Bucharest, where they got the chance to discover the local food and hospitality. They found Romania to be a safe country with beautiful landscapes, "a hidden gem."

Just like many years ago, when spending a few years in prison has made Jamie Leibert turn his life around, the COVID-19 lockdown has also proven to be a turning point for him. The crisis triggered by the new virus has put him and his partner out of business, as they were forced to close their event company. On the other hand, however, it also convinced them that the time has come to full-time follow their dream of being the first man and woman to fly a parachute in every country of the world. And once the borders reopen, they will continue their European journey, planning to also visit a few countries in Africa later this year.

Jamie Leibert talked to Romania-insider.com about his life and projects, including his Just Care More NGO, as well as about their Romanian experience and future plans.

Please tell us a bit about your background. How did you discover your passion for extreme sports?

My name is Jamie Leibert, I am 37 years old. I grew up in a small desert town called Blythe in California. I had quite a troubled childhood and was in and out of group homes for most of my childhood, never truly experiencing a stable home environment. I had a lot of energy, and as I grew older, I did not know how to channel it. Because of this, I made some bad decisions in my 20's and ended up in prison for a few years. It was here that I realized the path I was on was not the one I wanted to be. One day while in "the shue" (a term for isolation), I decided to turn everything around. When I was released, I met my partner, Sandra Zinovyev. She and I started our own company throwing large scale festivals around the United States.

I realized I needed ways to channel my energy, so I started to participate in extreme sports. I started with MMA (mixed martial arts), then rock climbing, dirt biking, and downhill mountain biking. One day, I went skydiving, and it was at that moment I knew my life had changed. I began participating in many air sports, including wingsuiting, paragliding, speed flying, speed riding, powered paramotoring, and base jumping. Participating in these sports became my sanity, my 'happy place.'

I realized that I had the insight that could help other youngsters that were on similar paths as I once was, so I started 'Just Care More' to help at-risk kids pursue their passions and introduce life lessons through adventurous outdoor activities. We take foster children on activities such as rock climbing, hiking, camping, and kayaking.

What brought you to Romania? Was this your first visit here?

I bought a one-way ticket to Norway and purchased a campervan from a friend. I drove the entire coast of western Europe, including Norway, Denmark, Germany, Netherlands, Belgium, France, around the coast of Spain and Portugal. Then when it got hot, I headed into the French and Swiss alps, through Austria, Slovenia, Hungary, and then into Romania. It was my first time in almost all of these countries, Romania included. 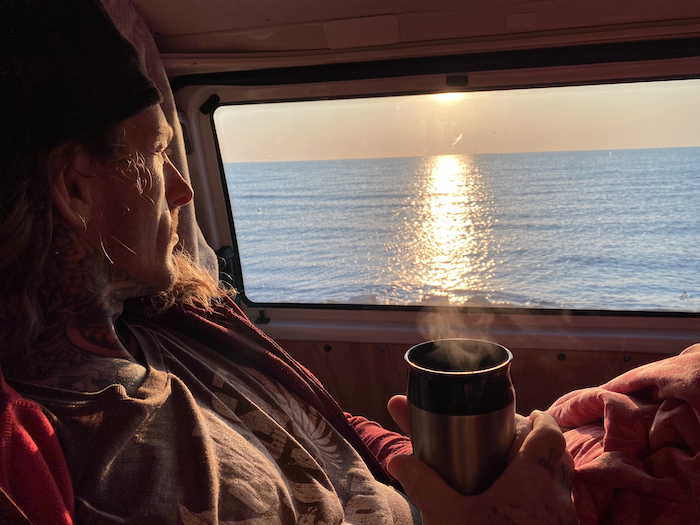 When did you arrive in Romania, and why did you choose to stay in Breaza during this period?

We arrived in Romania in November of 2019. Sandra's mother is originally from Romania. Her mother, Marina Zinovyev, immigrated about 40 years ago during communist times. Sandra still has family here, and their family owns an unoccupied apartment in Breaza. We decided to spend a little time in Romania to fully experience the country. However, when the COVID-19 hit, all of the borders around us closed, and we were unable to leave as we had planned, and decided to 'wait it out' in Breaza.

Tell us a bit about your Romanian experience - the people, the food, how is life in the small town of Breaza. Did you manage to visit other places in Romania/do you plan to visit other sites here? Would you recommend others to visit Romania?

We did not know what to expect when we entered Romania. It is not a common place for American's to visit. However, after our stay here, we believe Romania is a hidden gem! The people have been extremely welcoming. Many speak English, but even the ones who do not are very hospitable. Our neighbors often bring us foods that we have never eaten before. Our favorite food discovery was cozonac, and we probably eat too much of it!

We have visited some fun places such as the Bran Castle and Vulcanii Noroioși at Pâclele Mari. We also enjoy it because it is much more affordable than America. Everything is about 1/5 the price as it is in America, so we are able to live comfortably.

We came during the winter, and the snow was beautiful. We had a fun experience in Straja, which involved skiing and parachutes. Now it is spring, and we are amazed at how beautiful and green it is.

We think Romania is a hidden gem and have recommended it to many people who would like to visit a place that is 'off the beaten path,' beautiful, and inexpensive. Many of our American flying friends plan to come once the virus is less of a problem, and travel restrictions are better! We absolutely recommend adding Romania for anybody who enjoys culture, outdoor recreation, and adventure activities. Also, we recommend Romania for people who are looking to expat to other countries. It is very safe, and a good place for people who would like to retire somewhere less expensive than the United States. The language is similar to Spanish and not very difficult to learn. We have been learning slowly!

Are you still in Romania? Where do you plan to go next?

Yes, we are still in Romania. Many of the borders are still closed, so we have been unable to leave. However, on June 1, we will leave Breaza and visit more places in Romania until the border of Bulgaria opens.

Then we will visit the following countries: Bulgaria, Greece, north Macedonia, Albania, Serbia, Montenegro, Bosnia and Herzegovina, and Croatia. Then for the winter, we will head down to Africa visiting countries like Morocco, Western Sahara, Algeria, Mauritania, and Senegal. Then in 2021, we plan to finish all the countries in Europe.

Tell us about your plan to become the first man and woman to fly a parachute in every country of the world. How and when did you come up with this idea, and how many countries have you covered so far?

When I came to Europe, I thought it would be fun to record my travels to be able to share my experiences online for people to follow along with the adventures. We recorded the entire trip along the coast, through the mountains and into Romania. Even with the COVID-19 hit, we kept recording, documenting the struggles that we encountered.

Because events were not permitted in the United States, it made it impossible for us to have any events in 2020. This put us in a situation where we could no longer financially support the business, and we were forced to shut it down. It was at this time, we were still 'stuck' in Romania, but now with no business to make money. But instead of letting it defeat us, we quickly realized it was an opportunity in disguise.

We wanted to combine our passions for adventure travel and air sports in a way that inspired people around the world to overcome their own obstacles and follow their dreams. That's when the idea hit Sandra. One day, over our morning coffee, she said: "I have an idea. Why don't we make our dream a goal so crazy, so impossible, so dangerous that nobody has even attempted it before? Why don't we become the first people to fly a parachute in every country of the world?"

It was brilliant. It was at that moment, a light switch was turned on. Suddenly, all of my travels, my flying, my struggles, they all had a meaning. To show the world that it does not matter what you have been through, that it is possible to chase your dreams, even if they seem impossible! We would record the entire process, every struggle, success, injury, and show the world what it is like to chase such a crazy dream. We could call the show, Captain Manicorn. 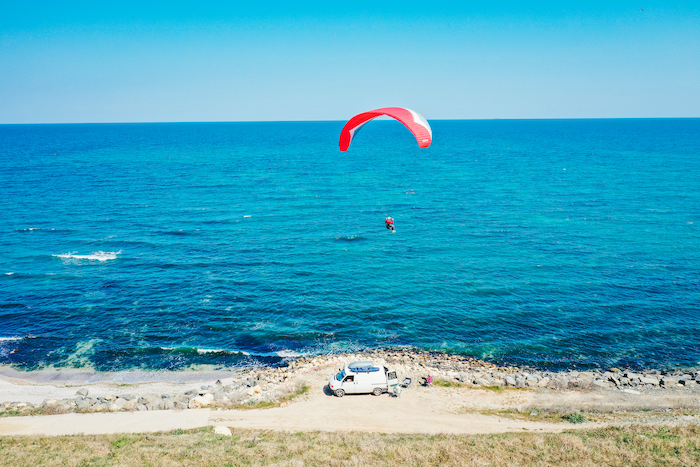 Although Sandra and I have flown in over 30 countries already, because of strict rules for setting a world record, we would need to start all over again. Some of the rules include getting two witness statements for each flight, and a detailed time log for each flight.

Where did you fly in Romania?

We have flown at a few places in Romania, including Busteni, Breaza, Brasov, Costinesti, and Piatra Craiului. The flying here is absolutely beautiful, some of the best in Europe, in my opinion. The locals were extremely hospitable. The local flying club Asociatia De Zbor Liber Din Romania let us know the best places to fly, and a fellow pilot George M took us on many beautiful flying adventures to locations we would never have known without a local showing us.

How do you fund your trips?

We will be working with companies and tourism departments who would like to sponsor the record and the show. These are brands that believe in what we are doing. We have already secured multiple sponsors for season two of our journey. Any companies interested in sponsoring can reach out to us via our social networks.

Making history is not cheap, and we understand we can only accomplish this with likeminded people who share an interest in human exploration. We are making history, and we welcome all the help we can get along this 11-year mission to set a world record.

Jamie Leibert and Sandra Zinovyev have been sharing their experiences online. Those who want to follow their adventures can do it on Facebook and YouTube, where the first season of Captain Manicorn will also premiere on July 12.