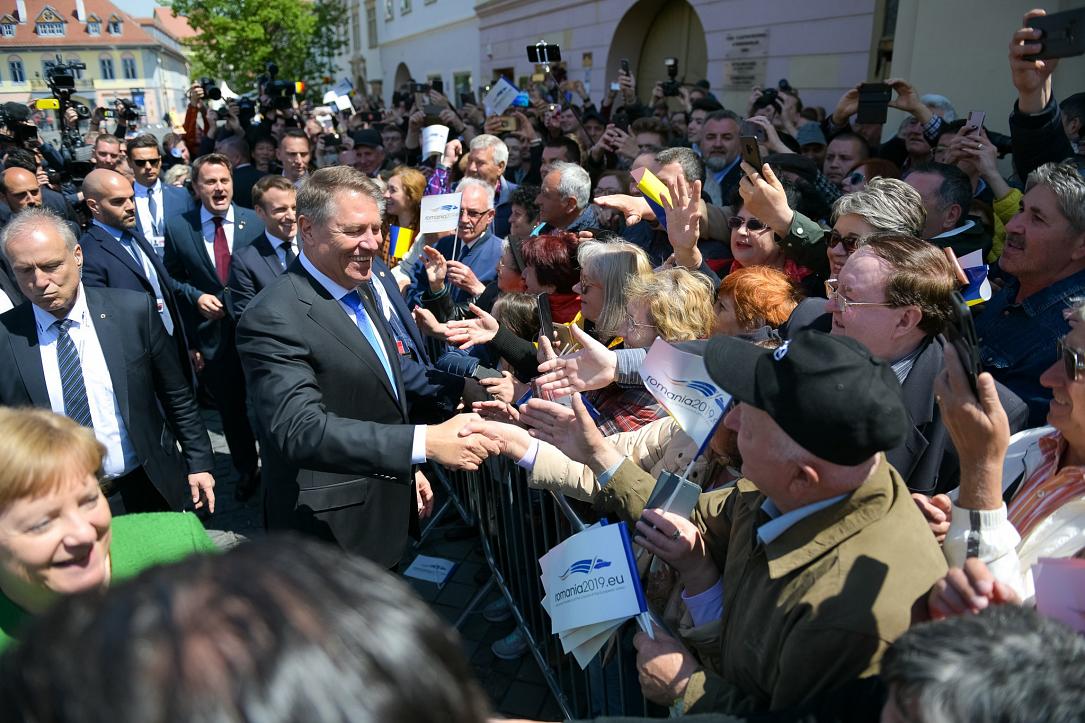 The informal summit of EU 27 leaders held in Sibiu, in central Romania, on May 9, saw the adoption of the Sibiu Declaration, discussions about the EU’s priorities for the coming years but also the announcement of the date when all 28 EU leaders will meet to start the process of choosing the leaders of the top EU institutions.

The heads of state and government gathered in Sibiu began the discussion about the EU’s priorities in the coming years, both in the area of internal affairs and that of global challenges. The results of the discussions will be seen in June when the EU’s Strategic Agenda for the next five years will be adopted at the European Council, Donald Tusk, the European Council president, explained.

“Without prejudging the outcome of this debate – as it will also be influenced by the European Parliament elections – I can state one thing with complete certainty. The leaders have categorically demonstrated that they want to take full political responsibility not only for single events or challenges but for the European Union as a whole. Put simply, the member states and their democratically elected leaders want to actively shape the way the EU functions and develops,” Tusk said.

“This European Council showed us that we can stand united, not just as a façade, but for real, just as in the past five years we succeeded in acting together. It is often said, it is not totally erroneous, that [there are] whole areas where the European Union has failed to meet expectations. But 90% of directives and regulations have been adopted unanimously. The EU is not in crisis if it manages to adopt unanimously 90% of the texts which are submitted by the two co-legislators,” Juncker said. Junker called the meeting “one of the easiest he has attended” firstly because president Klaus Iohannis and Romania “prepared it in the best possible way” and secondly because there was no urgent decision to make.

Talking to the press after the summit, German chancellor Angela Merkel spoke of how member states worked together.

“It was important for us today to define our role in the world, to say once more that we are fighting for a Europe of values and everybody, or mostly everyone, agreed, one country cannot solve the world issues,” the chancellor said. “We have talked about the issues of the European Union, we can talk to each other about all topics two weeks before the EU elections. We have proven that in crisis situations we help each other, we stand united. We have overcome together situations such as the financial crisis or migration. We need to develop the European project into a lasting one,” Merkel said.

In his turn, French president Emmanuel Macron spoke of the need

for Europe to be more effective about its borders. “We need a new policy for those who want to come and live in the European Union,” he said, quoted by News.ro. He also pointed to the need to redefine the economic and social growth model of the European Union.

“My intention is to carry out the election of heads of EU institutions in a swift, smooth and effective manner,” Tusk said. He explained that the process will follow the rules set down in the Treaties and that it should reflect both geographical balance and demography so as to have both large and smaller countries represented.

“Of course, it would be best if we managed to reach consensus on all these decisions. But we have to be realistic. I will not shy away from putting these decisions to the vote if consensus proves difficult to achieve. The aim is simple: we need effective institutions, and so we need swift decisions. My intention is for the European Council to nominate the new EU leadership in June. I call on everyone to live up to their responsibility to make this possible,” Tusk said.

Ahead of the European elections, European political parties appoint lead candidates for the role of president of the Europen Commission in what is known as the “Spitzenkandidaten process.” The presidency of the Commission goes to the candidate of the political party with the most parliamentary support. Some EU leaders do not support the system. Among them, French President Emmanuel Macron has expressed opposition to the Spitzenkandidaten process.

The rule of law

The EU has expressed concerned over the rule of law in Romania on several occasions in the past two years and the topic emerged again at the post-summit press conference.

Tusk spoke about the rule of law as the political essence of Europe.

“The rule of law is the essence of our political activity and it will be at the center of our attention also in future documents, including the Strategic Agenda. No doubt. There is no Europe without rule of law. This is not because of some ideological doctrine. No. This is the quintessence of Europe as a political entity. It is not my role to intervene in some internal issues here in Romania but from my own personal experience I know one thing, that if you are ready to defend the idea of rule of law, then you can be optimistic, but only then,” Tusk said.

In his turn, president Klaus Iohannis said that Romanians want the rule of law but there are politicians in the country who do not want it.

When asked about the rule of law in Romania, French president Emmanuel Macron said the EU remains vigilant about it.

“I think that there are decision taken by the Romanian Government that have led to making the rule of law fragile. The European Commission had the opportunity to say this and now we are vigilant in this respect. But I have also noted that president Iohannis was always here, vigilant, present, strong,” Macron said, quoted by Agerpres.

Dutch prime minister Mark Rutte said at the summit that Romania would be ready for admission to the Schengen area “when it complies with the rule of law and democracy,” adding that the country is not currently heading in the right direction.

On a related topic, European Parliament president Antonio Tajani said in Sibiu that the institution’s decision to support Romanian candidate Laura Codruţa Kovesi for the job of chief prosecutor of the European Public Prosecutor's Office (EPPO) will not change after the elections. “The Parliament decided, the decision will not change,” Tajani said, quoted by News.ro.

While in Sibiu, German chancellor Merkel met with representatives of the Democrat Forum of Germans in Romania and thanked them for being a “bridge” between Romania and Germany and upholding their cultural heritage. She urged them to take the tradition further even if they are fewer in numbers these days.

During medieval times Sibiu, known by its German name of Hermannstadt, was a center of the Transylvanian Saxons and one of the seven citadels - Siebenbürgen, a name by which Transylvania was known. Romania’s president Klaus Iohannis, a former mayor of Sibiu for 14 years, is a member of the Germany minority in the country. He was also a leader of the Democratic Forum of Germans in Romania from 2001 to 2013.

A series of bilateral meetings took place on the margins of the summit. One of them was that between French president Emmanuel Macron and Romanian president Klaus Iohannis. The two met in Iohannis’s former office at the Sibiu City Hall, overlooking the Grand Square in Sibiu’s Old Town.

Several offices in the Sibiu City Hall were set up in advance for such bilateral meetings, with offices for president Tusk, president Junker and other EU leaders. For instance, Donald Tusk met with Hungarian prime minister Viktor Orban, and with Sweden’s prime minister Stefan Löfven, ahead of the summit.

While in Sibiu, Macron also met Romanian opposition leader Dacian Cioloş, a former EU agriculture commissioner, prime minister and now president of PLUS party. The talk was focused on the Manifesto for Europe, which the USR and PLUS alliance recently launched, and on “preparing the future pro-European group in the future EU Parliament, to be designated at the May 26 elections,” Cioloş explained in a Facebook post. The USR-PLUS manifesto outlines the alliance’s belief in “a renewed and strong Europe, a Europe of all of its citizens, a Europe of prosperity and equity, of democracy, of freedom and the rule of law.”

President Macron launched this March an appeal titled “For European Renewal”. It stresses the importance of the European Union and the need to renew the European project “around three ambitions: freedom, protection and progress.” It can be read here.

Last year, Cioloș was among several European leaders who signed an appeal to reinvent Europe, alongside Christophe Castaner, president of La République En Marche!, founded by Macron; Albert Rivera, leader of Ciudadanos, Spain; and Guy Verhofstadt, president of the ALDE Group in the European parliament, among others.

During the day, the EU heads of states and government present in Sibiu received a very warm welcome from the city residents gathered in the square where the event was taking place. After the official group photo, the officials went to greet the people in the Grand Square, a moment described by president Iohannis as “the most emotional” of the summit. Among those who went to shake hands with the people, who were chanting “Europe” and “Iohannis”, were European Commission president Jean-Claude Juncker, European Council president Donald Tusk, French president Emmanuel Macron, and German chancellor Angela Merkel, who received a particularly affectionate welcome, captured in the photo below.

A remarkable picture. Merkel and EU leaders get a truly emotional welcome from Romanians gathered in Sibiu.

While in Sibiu, Donald Tusk met with former Romanian goalkeeper Helmuth Duckadam, whom he mentioned in the speech he held in January in Bucharest, at the ceremony marking the start of the Romanian presidency of the Council of the European Union. Duckadam gave Tusk a bottle of local brandy (palincă) he made himself and a pair of mittens, which the president of the European Council brought to the press conference after the summit. Tusk explained that Duckadam offered advice on how to defend the interest of the union more effectively.

Tusk ended the post-summit press conference speaking in Romanian. He praised the the organization of the summit and said he fell in love with Sibiu.

"I would like to thank President Iohannis for organizing and hosting the Sibiu Summit. When we met in January, at the beginning of your Presidency – when I spoke with such conviction, and so emotionally about Romania – I was speaking with confidence, because I know that you are truly remarkable. You have organised an exceptional summit and you can be proud of your work, just as Europe is proud of you. I have fallen in love with Sibiu, the whole of Europe has fallen in love with you," Tusk said.

Tusk ended the day attending the Europe Day concert, alongside president Klaus Ioannis. The concert was held in Sibiu’s Grand Square. President Iohannis took the stage to thank Sibiu residents and the city for making a “very, very good impression” in Europe. 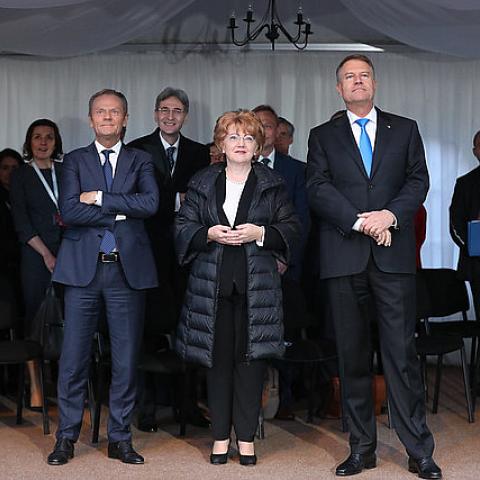 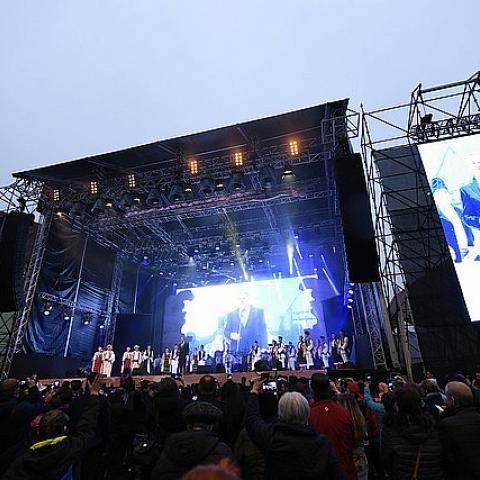 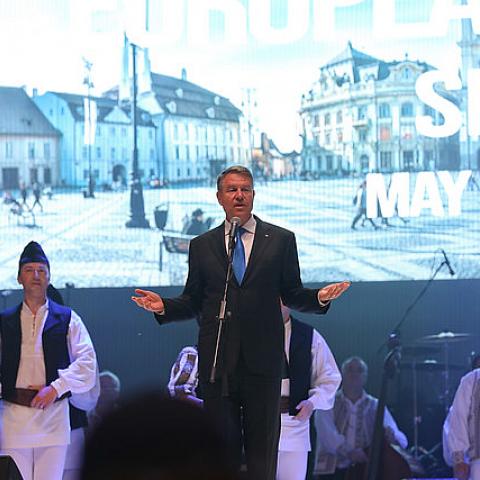 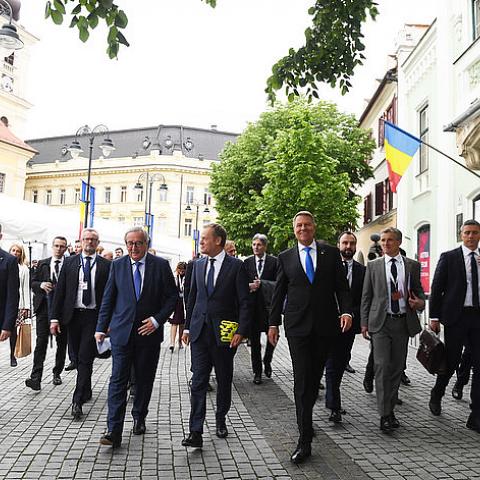 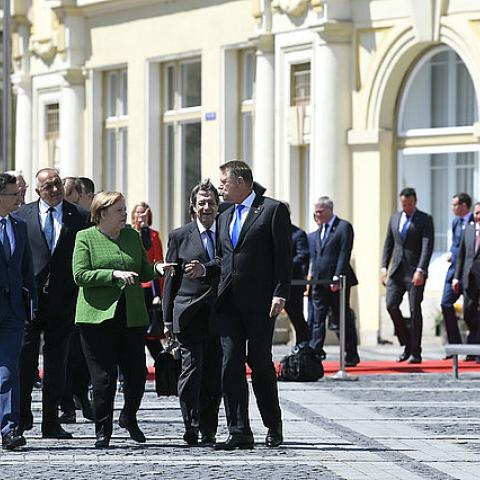