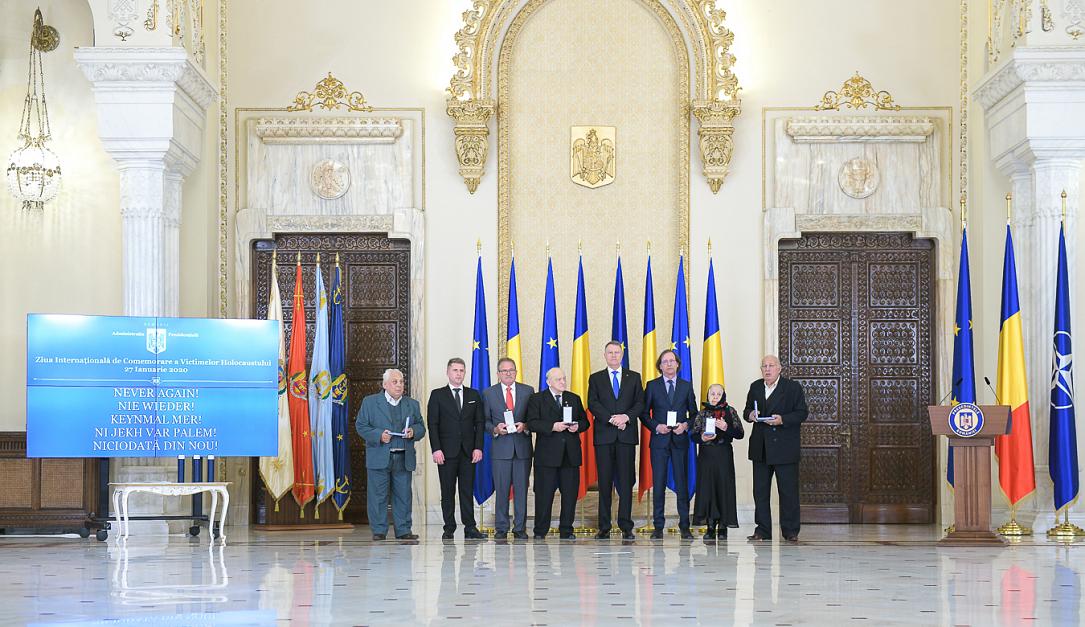 The danger of xenophobic and anti-Semitic attitudes resurfacing is “always present,” Romanian president Klaus Iohannis said on January 27, at a ceremony to decorate Roma survivors of the Holocaust and several organizations.

“These developments represent a frontal attack against the rule of law and democratic principles, and this is why the counterattack needs to be firm and in agreement with European values,” Iohannis said.

“Seventy-five years after the liberation of Auschwitz, the entire world condemns this unparalleled tragedy, and honors the memory of those who were the victims of the Holocaust. This huge genocide project was not only about Jews and Roma, it was about all of us. As Yehuda Bauer accurately described it, it was 'a total rebellion' against Western civilization and the concept of human being,” the president said.

The president argued that “only by cultivating memory we can keep alive the drama of the Jews and the Roma and take responsibility for a history drawn with thick lines, a painful past we neither ignore not hide, but are aware of with all responsibility.”

President Iohannis said he would continue to advocate in favor of preserving the memory of the Holocaust and combating anti-Semitism.

“Romania has understood the size of the horrors, took responsibility for this dark part and undertook specific steps regarding the memory of the Holocaust, consolidating the Holocaust education and research, combating extremism, anti-Semitism and intolerance, and strengthening the legislation in this area,” Iohannis said, saying that the organizations he decorated had a determining role in this “significant progress of the Romanian state.”

In its 15 years of activity, the Elie Wiesel National Institute for the Study of the Holocaust in Romania has promoted the knowledge about the genocide, defended the memory of the victims and contributed to discouraging anti-Semitic and racist incidents, the president said.

Furthermore, the Federation of Jewish Communities in Romania “dedicated itself completely to promoting and defending the interests, culture and traditions of the Jewish community in Romania, encouraging the respect towards diversity and the dialogue between religions.”

At the same time, the Memorial Museum of the Holocaust in Northern Transylvania is “a space for commemorating and remembrance. Because of the valuable efforts of this organization, the drama of the Romanian Jews under the Hortist occupation is, today, better known to the wide public,” the president said.

He explained that in 1942, approximately 25,000 Roma were deported in Transnistria, among them a large number of women and children. Of those deported, 11,000 died, most of them because of hunger, cold, and precarious medical care.

The president also said the education about Holocaust is a national priority.

“We should not stop here, because the danger of xenophobic and anti-Semitic attitudes resurfacing is always present. Jewish cemeteries are vandalized, public actors claim the supremacy of certain races, the monstrosities of the Holocaust are relativized publicly, detestable criminals from our history are praised, and Roma citizens are not rarely humiliated or discriminated. […] We need even more education because it is the only firm commitment that we will defend, in the future, with all our strength, democracy, and individual rights and liberties,” Iohannis said.

The president said Europe is not yet cured of the diseases of anti-Semitism and extremism and argued in favor of reflecting on the past in order to ensure “the building of today’s society on healthy foundations.”