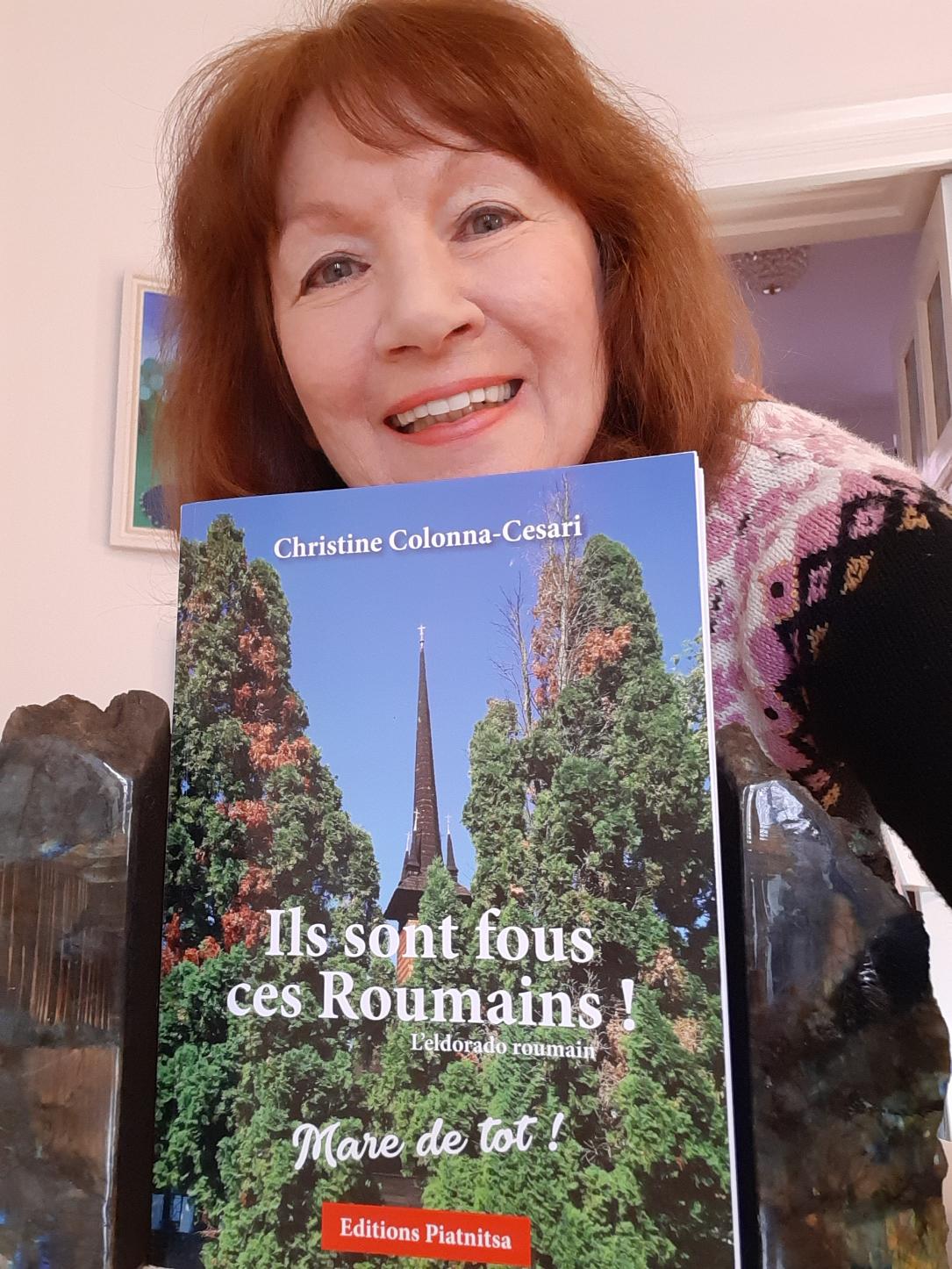 French writer Christine Colonna-Cesari has made Romania her home. A long-held interest in the country's culture and history brought her here many times before she decided to move to Bucharest. Now, she shares her insights in her new book, Ils sont fous ces Roumains! L'Eldorado roumain, exploring various stories of local creativity, bits of history and known or lesser-known places, among many others.

Christine Colonna-Cesari says she has a long story with the country where she decided to relocate in 2018. "There is a very long love story between me and Romania. When I was in France, just at the moment of the [1989] Revolution I felt strong connections with this culture. […] I had a lot of Romanian friends in France. And also, myself, I studied deeply all the aspects of this country - literature, history, culture, folklore, music, and so on. It was a spiritual meeting, as if I had lived in this country in a past life and been again connected with it," she explains.

"There are people who have a special connection with Japan, with Mexico, with the United States, because they are able to have this connection. With Romania, it is a very long story; all my other cultural love stories have been shorter," she says, laughing.

Having friends in Cluj, she visited the country several times before moving here, in Bucharest. "After I visited Bucharest two or three times, I knew that for me, as a writer and publisher, and also for the connection of the city, it was here that I must move. I never regret, not for five minutes, my choice to have come here," she says.

It was a move that helped her feel more in tune with her values. "For my sensibility, my energy, my spiritual level, in France I was not in my element, it was difficult for me, it was a fight continuously. Here I don't feel that I am always fighting to be in harmony."

While still in France, she was following the news from Romania, writing down various aspects that interested her. This is how the outline of the book started to come together. "I took notes, I noted what was interesting for me, exceptional. And my first observation - it was this creativity; also a lot of young people, for instance in science, mathematics and so on receiving awards for their work. In France, they never speak about this. So I took note; you know, writers sometimes take notes instinctively," she explains. "The book has been inside me for a long time."

She decided to write a book about Romania to share her interest in the country and also dispel some of the misconceptions she had noticed. "They do not know this country so well and they do not imagine the richness in this country, the intelligence and the creativity of the people here. So the last time I came back from Paris, I decided to write this book to show what I know about Romania."

As she didn't speak Romanian, she contracted a Romanian acquaintance to help her get around the country for various interviews. Florin accepted the job right away, she recalls, impressed with the promptness of the response, and helped translate the interviews. He also put her in touch with sports commentator Ilie Dobre, the holder of several records, including one for the longest broadcast of a goal shout.

A chapter in the book is dedicated to Dobre, alongside others on personalities such as businessman Mircea Tudor, the founder of a company providing various scanning solutions for the global transportation sector. Other chapters cover sites such as the Obor Market in Bucharest, the Black Church in Brașov and its impressive organ, the Merry Cemetery in Săpânța, the Palace of Parliament, Roşia Montană, the ethnographic museums in Cluj-Napoca, Sibiu, and Bucharest, the water mills in the commune of Eftimie Murgu, or the laser at the Institute of Nuclear Physics in Măgurele, among many others.

Part of the book covers the differences she experienced upon arriving, which she wanted to present "with humor because we are in a country where people are always doing humor."

One challenge she faced in the city was finding the addresses of the venues she had meetings in. "Like I explain in the book when you arrive in Bucharest, a difficult thing is that you never find the name of the street, the number of the house where you have an appointment because the names of the streets are missing in a large part of Bucharest – it is astonishing because in France even in a little village, everywhere you go, you find the address easily. And for me, it was difficult because I did not speak Romanian and when I had an appointment I always took a taxi to make sure I found the address; it was a big adventure."

Another aspect mentioned is "the special relation of the Romanian people with time." "Here in Bucharest, you take an appointment, and it changes at the last moment. […] And you get the feeling that you will never succeed on what you have decided, but in the end, when you are patient and open, you realize that you can count on people. They do very well, but they organize at the last moment. I am independent, I have a lot of deal to front, so I am obliged to understand you better – this way of being out of time, timing, and I think this protects somehow this country."

Before writing the book about Romania, she wrote several books for children: Anda la Louve et le Secret du Mont Omul, Le Retour de Merlin et de la Licorne d'Or, Vence des Sources et des Fontaines, and La Sorcière de Barmington. Completely in love with books from an early age, when her wish to become a writer first started to take shape, she approached them with the intent to create more elaborate works, which would appeal to both children and adults.

"What was important for me was to do books for children with a high level of writing. In the 19th century, the books for children were very well written, in elaborated language, a very high level of culture. That is lost now [..] For me, the first option was to have a book with a good level of culture. Then it was an initiatory book, always a fairytale with a message inside. Another important thing was doing a book at the level of children and for the parents, one that children and parents can share and discuss."

Anda la Louve et le Secret du Mont Omul, which won a competition on the theme of traveling in Romania, also prompted Cesari to establish the Piatnitsa publishing house. "At the moment, there was a competition, and the subject was traveling through Romania. I had a basm [fairytale] that I had written. It is the story of a she-wolf, and she fights for the light; she is a guardian of god Zalmoxis. All that was happening in Romania. The book was selected to have the Panait Istrati award. After this, I tried to find a publisher; […] it didn't interest any publisher, so I told myself: it's like that, you don't want my book, I create my own publishing house and I publish my book."

With her most recent book, she hopes it allows the public to discover more about the country. "I can tell you I saw people are at first astonished; they discover a lot of things. I have a French friend who would come to move here - the first one who bought the book to decide. Also, Romanians are very enthusiastic because they told me they discover a lot about Romania that they don't know. They find what is amazing. So I am very happy because I succeed in sharing an admiration for Romania and Romanians."