The village library that started in the street: How one man does his part for education in Romania 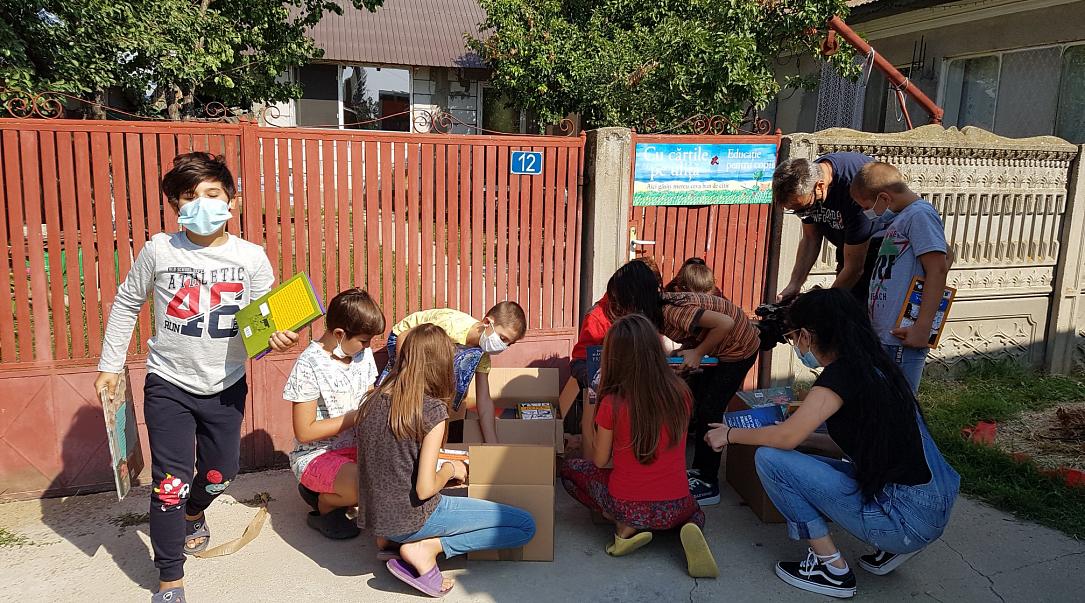 In a village in southern Romania, one man has set up a library inside his home for the children in his native commune. He also helps them with the school homework and, more recently, has also started delivering math lessons online. Now he is working on setting up a cultural center, part of his vision for an educational project aimed at helping kids fare better in school and get the chance at a better start in life.

This September, Humanitas publishing house announced the start of a mobile library project. Set up inside a van, the library targeted localities in the country left without a bookshop. The first stop was in the commune of Scrioaștea, in Teleorman county, to offer book donations to what it called "perhaps the most ambitious educational project in Romania." The project was started by Relu Voicu, a screenwriter who moved back to Scrioaștea after many years spent in Bucharest.

It all emerged around the time of the diaspora protest on August 10, 2018. The protest brought Romanians living abroad and those in the country together to state their dissatisfaction with the policies and changes to the justice laws introduced by the ruling coalition at the time.

"I started this absolutely by chance, without a scenario, with no premeditation; it was by chance, and maybe because of this or due to this, we have arrived here today," Relu Voicu says, as he looks back on the more than two years that have passed since the project started taking shape.

Voicu, who was already living in Scrioaștea at the time, wanted to attend the protest.

"I said: I want to go there. […] I have to be there, in the square, because there were people coming from thousands of kilometers, from all over the world, from Canada, the United States; I was only 100 km away from Bucharest and could not have missed it. I thought it was compulsory to be there; it was a matter of dignity. And I wrote a post on Facebook on the evening of August 9, saying that I would come, hoping to also convince one or two more Bucharest residents to come."

In the same post, he explained that he would use some RON 100 (around EUR 20) he had saved up to buy some math books for his son for the trip. A friend, Cătălin Teniță, saw the message and, impressed by his commitment to get to Bucharest, offered to pay for his son's books.

"It just blew me away; I couldn't believe it. I couldn't accept the money […], but then I realized that there are people who want to help children, who want to support education, and I thought, 'why don't we do this for all children?'. And this is how it all started," he recalls.

A day later, another Facebook post tackled the topic, and bit by bit, more people joined to support his project, with book donations or money.

One of the first ideas was to repurpose street phone booths into small libraries, taking example from a UK initiative. As much as he liked the idea, he had to give it up since the project needed a space where children could work on their homework.

For a while, he displayed the books he had gathered in front of his house, on the side of the village lane – hence the name of the project Cu Cărțile pe Uliță (The books on the lane). He would arrange the books on AAC panels, a process that would take two hours on start and another two at the end. People looked at the books on display as if they were a UFO, he recalls, but, in time, a group of children who regularly come to borrow books was established.

The initiative caught the attention of the Humanitas Publishing House. Besides books, they donated furniture, including a blackboard, and Voicu set up a library in a room inside his home. There, children can read, do their homework, and receive additional tutoring.

"We do lessons here; we already have a bit of a tradition. [...] and I can say, without modesty, that there are children who left this place different from how they came."

His pride and joy is a girl who came for tutoring there when she was a sixth-grader struggling in math. "It is hard to conceive that a child, after six years in the public school system, knows nothing in that subject. Then, in the seventh grade, she got an eight at the quarterly math test (teza), and now she is in love with geometry," he explains. The highest grade Romanian pupils are awarded is 10.

When it comes to reading, the champion is a fifth-grade boy who has just set his sights on Victor Hugo's Les Miserables. "He seems to enjoy the bulky works, and he does read them. When he returns the books, I ask him what he enjoyed most; he is a very good kid," he explains of the boy, who is in foster care. Éric-Emmanuel Schmitt's Oscar and the Lady in Pink and Parinoush Saniee's I Hid My Voice also feature among the favorite titles of the young readers at Cu Cărțile pe Uliță.

"I want you to leave this place different from how you were when you came an hour ago," he tells them often. He also hopes to make reading a habit, in a place that is an hour's drive from the nearest bricks-and-mortar bookstore. In the mid-1990s, the nearest bookstore was in Rosiori de Vede, until it closed down. A few weeks ago, another one opened in Alexandria, some 50 km away. It is the only one in the city selling only books and providing a venue for cultural events, the Culture Ministry explained in an announcement that the culture minister attended the event.

Because of the coronavirus pandemic, Relu Voicu started delivering math classes online, in videos posted on YouTube. "I'm here every day. Now I'm doing lessons on YouTube. I hope to be able to meet the children in person soon."

For him, the PISA test results are more than statistics. He speaks of instances of children who move on from one school year to another without knowing the multiplication table, a lack of interest in reading, and a big interest in all things digital. "They are glued to their phones, to TikTok, how can you attempt to put a book in their hands?" he asks.

The efforts are now focused on opening a cultural center, which would encompass a library, learning spaces, a theater hall, and an exhibition venue. The donation campaign for this is ongoing.

"We purchased land here, with the money from donations, where we will build the culture center. I wish we can plant the seeds of a revolution in education, to be able to take it further than our lane, for other children."

He hopes individual initiatives such as his will change things. "I wish we could do more. I'm a dreamer, I chase chimeras, and this is what education is in Romania."