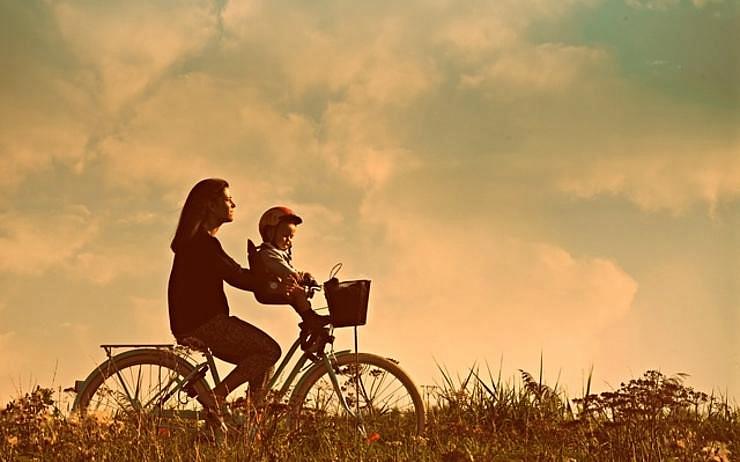 These bike routes may not be the first choice of thrill-seekers, but for those who want to live an unforgettable experience in one of the most beautiful regions of Romania, they can be perfect options.

Gentle hills with easy slopes, so that you can take your time and relearn slowness, a feature that defines very well the character of the Romanians in the region. On the other hand, you’ll have to be prepared for long trips, as some routes are 40 km long, so they’re not for those of you who are impatient. So, for a change of pace and a bike trip during the weekend or vacation, hop on your bike and go with your family, partner, friends or even alone to explore the picturesque region of the "Hills of Transylvania."

In total, there are more than 250 km of cycling circuits that cross no less than 26 Saxon villages, passing also through four monuments included on the UNESCO heritage list: Viscri, Saschiz, Valea Viilor and the famous medieval city of Sighişoara, while crossing protected natural areas of unprecedented beauty. With difficulty levels ranging from easy to medium, these trips are perfect for the whole family and will allow you to stroll along the rivers or old cart paths that once linked the localities during the Middle Ages. You will get to discover various Saxon villages, with their ancestral traditions and their local gastronomy rich in organic products, but you will also learn the stories and legends of the region.

Did you know that the hills of Transylvania are considered to be among the last medieval landscapes of Europe? With some of Europe's largest low-altitude wild meadows, the credit goes to the lack of intensive agriculture that has preserved the region's fauna and flora. In addition, its meadows and pastures, dotted with wildflowers and butterflies, shelter about 30% of the Romanian flora.

You will cross oak and beech forests, where you may have the opportunity to spot traces of bears, deer or wolves, green hills, many sheepfolds, but especially small hidden Saxon villages, all in an absolutely magical setting. Passing on roads leading to a fortified church or the castle of a Magyar noble, you will have the chance to admire the Saxon houses painted in pretty pastel colors, with their thick walls, their large wooden gates, their window shatters, their old roofs, and their paved inner courtyards.

If you have not yet visited the famous village that Prince Charles fell in love with, this is an opportunity to do so. This bike route allows you to discover the entire region of Viscri, starting from the village and passing through Bunesti, Crit and Mesendorf, and then returning to Viscri. Totaling 40 km, you will have about 8 km of paved road at the beginning, followed by a trail along a forest and fields of grain. Near Mesendorf, the route continues in the valley and then goes back on a forest path. After several climbs and descents, you will still have 10-15 km until you get back to Viscri. The circuit is very well marked so you can’t get lost. You can also take advantage of the beautiful scenery and make a picnic on the fresh grass.

If you are looking for a shorter circuit or you are going with the children, you can avoid going through the village of Bunesti and that means cutting the route to 32 km. Departure is from the main street of the village center, followed by a descent to the asphalt road (DJ 104K). After 7 km you turn left and enter the TBTN circuit network: the route winds along newly developed trails, crosses a stream and then goes back up to 500 m to reach an asphalt road again (DJ 132C). After 5 km you enter the village of Mesendorf. After a well-deserved break, you follow a stone path to the exit of the village, then a forest path that goes up to 724 m. A descent will follow then a climb on the hills. At some point you will get to a trail that will take you back to the village of Viscri.

To rest your muscles, you can visit the fortified churches and other sites:

Saschiz - the Evangelical Church, the clock tower, the peasant citadel

Crit - the fortified church, the museum

Here is the map of bike routes: 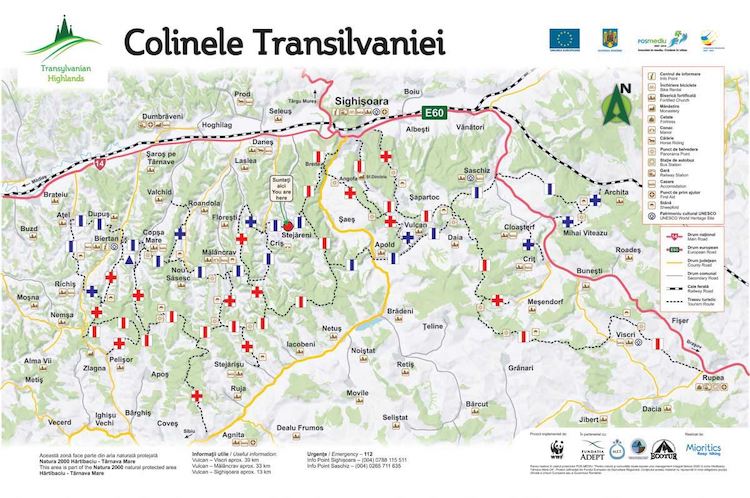 The long ride of the TBT race:

There is also the TBT, Transylvania Bike Trail, which offers a long trip of 78 km with a 1,700 m level difference. It starts in Saschiz and passes through Mesendorf, Viscri, Bunesti, Crit and back to Saschiz. Here’s the route:

-Descent to Mesendorf through the forest 3 km

-Pass by the fortified church of Mesendorf

-Go up from Mesendrof to the ridge by a 2.5 km forest trail

-Cross the village, next to the fortified church of Viscri

-Climb on the hill behind the village 1.5 km

-Go down from the hill and take the paved road 1.5 km

-Climb a hill from the road 2 km

-Descent to Bunesti, cross the river and then pass by the fortified church 4 km

-Pass by the fortified church of Crit

- On the right, follow the trail on the ridge 10 km

-Pass by the fortress of Saschiz

-A more technical descent from inside the fortress to the village 1.5 km

If you don’t know yet when to go, know that from July 25 to 29, the Haferland festival, which takes place in Viscri, Saschiz, Crit, Cloasterf and other villages, will honor the Saxon culture of Transylvania, an opportunity to see the Saxons returned to the country.

A list of places where you can rent a bike on site in Viscri, Crit, Valea Viilor or Sighisoara is available here.