The life of young Ion-Alexandru Secara took a new turn in the final year of university when he was accepted into a very competitive internship program in Silicon Valley. In the meantime, he developed a technology that helps users correct their posture while working in front of a computer, and got his research patented in the US.

Ion-Alexandru Secara, 21, was born in the small Romanian city of Tecuci but moved to Tbilisi with his parents when he was 13 years old. He went to high school in the Georgian capital and then chose to continue his studies at the University of St. Andrews in the UK. 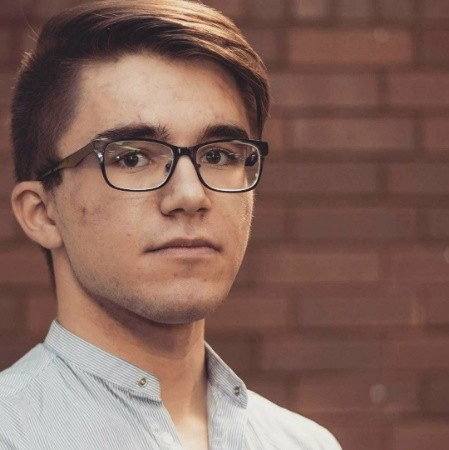 His life took a new turn in his final year of university, when he was selected in the Silicon Valley Internship Program - a highly competitive program that brings the world's best software engineers to Silicon Valley to work for high-growth startups.

Around the same time, Ion-Alexandru developed software that measures and corrects people's posture in real-time and can help users prevent back pain and mitigate the negative effects associated with bad posture. A useful tool in times like these, when people spend many hours a day in front of a computer. And, as he moved to the US for the internship program, he also used this opportunity to get his research patented there.

Secara talked to Romania-insider.com about this new technology, the offers he received so far for it, his plans with the project, but also about how it is like to be a young Romanian entrepreneur in Silicon Valley and what he plans next.

I'm 21 years old and I was born in Tecuci, Romania, but I spent most of my childhood in Iasi and Bucharest. When I was 13, my parents and I moved to Tbilisi, Georgia, where I did my high school studies. Then, I had offers from universities in the US and Western Europe. I ended up going to University of St. Andrews, in the UK, because of its renowned Computer Science department.

I've previously worked as a Software Engineer at Adobe, Intuit and Iron Sheep Tech (a Romanian startup in Bucharest). I chose a path towards a Software Engineering career because developing software that can change people's lives for the better is my biggest passion in life. Apart from that, you can often find me working out, reading books, educating myself on social equality, and pastel drawing.

Tell us about your ‘journey’ from Romania to the US – why did you go there, how has life changed for you in the US?

In my final year of university, I was accepted into a very competitive program, called Silicon Valley Internship Program, which brings the world's best software engineers to Silicon Valley to work for high-growth startups. The recruitment process took about 5 months, so I had to stay permanently focused if I was to achieve one of my lifelong dreams of coming to the Bay Area.

Life in Silicon Valley is different from anything I've experienced before. People over here work hard and play hard. The environment is extremely competitive since I work alongside some of the world's most hard-working and creative minds. There is a lot more to learn, but I also believe that I have a lot to give.

Please tell us more about this new technology that helps people improve their posture - how did you come up with this idea and why did you choose to develop a technology in the medical & health area?

While studying in St. Andrews, I started to realize that my posture was terrible and I started experiencing back pain after sitting in front of a computer for extended periods of time. Looking around myself, I realized that I was not the only one to suffer from this. Therefore, almost two years ago, I joined an open-source project that was developing software to recognize a person's full body, in the shape of a skeletal structure. 3 months later, I left the open-source project, thinking that I gained enough knowledge to be able to develop my own body-recognition algorithm, which I wanted to use to improve my own posture. In my final year of university, I was able to develop a very basic piece of software that measures and corrects my posture in real-time and notifies me to take an exercise break every hour. Some of my friends saw the project and wanted to use it too since they were experiencing the same issue. Seeing the value in the software I developed, I decided to get it patented when I arrived in the US.

I've been passionate about health, fitness, and wellness since I was much younger. It started at the age of 13, when I developed a GPS mobile application for people with Alzheimer's disease. I truly believe that software can better and empower people's lives.

How does your project work, when did you launch it, and what were the development costs?

My project uses a complex Deep Learning algorithm to analyze a person's upper body and identify key coordinate points (i.e. nose, eyes, ears, shoulders etc.). Once moving into a healthy sitting or standing position, the person takes a picture which is then processed by my proprietary algorithm that analyzes their different posture indicators like where their nose is in relation to their shoulders. Whenever the person has bad posture for an extended period of time, an alert is triggered so he/she can go back to the initial healthy posture position.

I've also created a proprietary movement and exercise system that sends the person custom exercises and walk breaks throughout the day to prevent back and joint pain.

The patent was filed in December, 2019. My time was the only development cost - since the software runs offline, I do not need to pay any money towards any sort of cloud hosting provider.

What are your personal goals related to this project? Do you want to continue developing it or would you see yourself selling it and trying something new?

My goal is pretty simple: I want to get this into the hands of every person that wants to address sedentary behavior, prevent back pain, and mitigate the negative effects associated with bad posture. Many studies have shown and I truly believe that having good posture improves productivity, wellbeing and the way you are perceived by others. I had an offer from Samsung for the software and patent, but I declined it. I feel like the project itself is only just starting and I want to be there to make sure it reaches its full potential. Bigger companies will try to find financial value in the project, but I want to create actual value that can help people's lives.

How is it like to be a young Romanian entrepreneur in Silicon Valley? What are the main challenges today for a young entrepreneur?

I did not know anyone when I first moved to San Francisco, so it was a challenge to adapt and start connecting with people that share the same values and vision as me. Romanian presence in Silicon Valley is quite strong, so I had the chance to meet quite a few Romanian entrepreneurs that helped me throughout my journey.

I believe that the main challenge that young entrepreneurs face nowadays is the illusion of overnight success. The best piece of advice I've ever gotten is 'Your startup fails only when you give up.' While this may seem trivial, it truly embodies two of the main ingredients of a successful startup: hard-work and perseverance. I've met entrepreneurs who were working on their startups for several years without any success and then the following year their businesses would turn into million-dollar companies; but I've also met entrepreneurs who would achieve this in several months from the moment they started working on their idea. Obviously, it is a matter of luck and being at the right time in the right place, but also about staying dedicated and realizing the direction where opportunities will reveal themselves.

Romania has sometimes been called Europe’s Silicon Valley. Do you think that Romania offers the same opportunities that an entrepreneur finds in Silicon Valley? Do you see yourself returning to Romania and starting a business here?

I believe that there are plenty of opportunities back home, but at a much lower scale. It is common to see early-stage investments of a few million dollars in Silicon Valley, while back home most of those investments are in the order of hundreds of thousands. Romanian entrepreneurs have created world-renown companies, including UiPath and Bitdefender and there are many more to follow. This shows that Romania definitely has a basis and a much higher potential to create a healthy ecosystem for startups to grow in.

My plan is definitely to return back home. I want to hone my talent as much as I can, while I'm still in the US. When I feel the time is right and I've developed myself enough I will return back home and try my best to really help the tech community over there.