Chef and apprentice: How mentorship changed the life of two young men in Romania’s poorest region 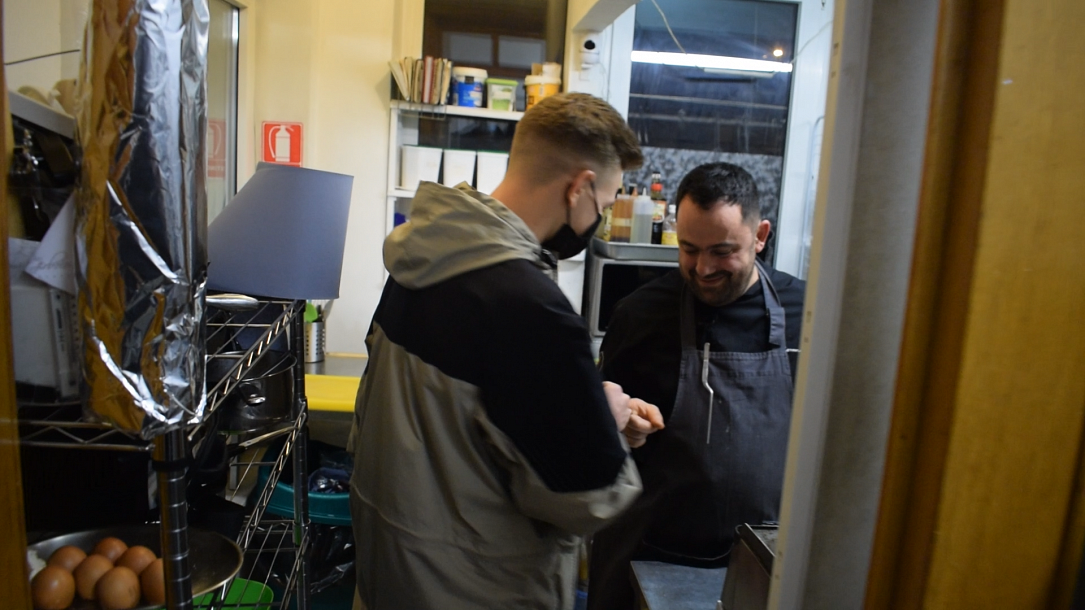 “Good cheese in dog skin” is a Romanian saying describing people who have high potential but do not use it. However, for most young people growing up in Romania's most underdeveloped region, this is not a matter of choice but luck. Finding a mentor or a role model can make all the difference between living a decent and fulfilling life in the country and a constant struggle for survival.

This exclusive Romania Insider article puts the spotlight on the life stories of two young men from North-Eastern Romania. One of them left the country at a tender age to find his vocation as a cook and later a chef in Italy, under the mentorship of a Tuscan restaurant owner. He then came back to Romania to open a Mediterranean restaurant in his hometown, where he became a mentor and role model for a young man who may not have to leave the country to find his meaning.

Growing up in Războieni, Neamț county, can be a difficult task to complete when your ambition and clear career goals are inhibited by an adverse social environment. The Moldavian village is secluded among the poor, agricultural flatlands of North-East Romania - that is a challenge in itself. But for one young man, his familial connections certainly didn't help. Radu’s childhood was nothing that anybody would wish for, but somehow, Radu says he has “learned even from the worst examples. I wouldn’t call either my parents or my high-school friends anything close to role models, but now, at 22, I finally feel a bit of pride in what I’m doing”.

Radu’s mother abandoned the family when he was too young to remember, to build a new one, soon followed by his father. Meanwhile, he grew up with his grandma, who he proudly affirms that she “taught me everything I needed to handle life”. In high school, surrounded by a myriad of sly people, Radu remembers that his mind “was not very present in the classes, and that is why I missed many of them. Soon after I finished high school, I looked for jobs in Piatra Neamt, landing one in HORECA. I loved working in the kitchen from day one!” said Radu.

Radu could call himself lucky to be hired in the middle of the COVID pandemic in the hospitality industry, where 35% of businesses closed, and 36.000 people were fired, as of summer 2021. Furthermore, according to the INS (National Institute for Statistics), the unemployed population in Neamt country is the 11th highest in Romania, while 4 out of the other 5 North-Eastern counties are in the top 10. The emigration intention in this region is also the highest in Romania, up to 28%, so one would ask themselves: Why has Radu not left yet?

He says that he has “never considered leaving Piatra Neamt yet, but you never know”. Some of the reasons for not leaving are his 88-year-old grandmother and his ambition not to follow in the steps of his parents, who quit fighting too easily. They left for Italy, the main attraction for Romanian immigrants.

One in three Romanians who left the country went there, and one of them was Ioan Popa from Piatra Neamt.

Ioan was 17 when he left for the Mediterranean country, looking for a better place to live and to learn a craft. He lived for 15 years under the mentorship of Antonio, a restaurant owner from Massa, a small town on the clear shores of the Tyrrhenian Sea. During this time, he acquired the necessary skills for becoming a cook, and in the process, Ioan Popa became Chef Giovanni.

He still easily recalls the smell of fish, the shape of the Tuscan hills, and says he will always be grateful to Antonio for it. "He helped me define myself personally, but more importantly, professionally”. Throughout his life, Giovanni didn’t see only his name seeing some changes, but also his vocation.

Initially, his parents thought he could become a great engineer. “When he was 3, he was bothering me to fix the car, and later on he was helping some locals refurbishing a club”, remembers Giovanni’s father. “After being around those people in his teenage years, he just wanted to leave Piatra Neamt. They were always handling shady business and doing drugs, and Giovanni never liked that. Regardless, I would have never thought he would change the hammer with a ladle”, he adds smiling. The ladle he refers to, stirs now, daily, in the highest-rated restaurant in Piatra Neamț, Il Viaggio.

Giovanni started Il Viaggio almost four years ago, with a handful of people, and a lot of ambition. The place where the restaurant lies is an old house, that brings together the coziness of a living room, the calming sound of jazz, or Spanish guitar, the colors of the Mediterranean, and the smell of every place Giovanni has been to. The taste of his dishes, usually combines Romanian classics, his personality, and a splash of Giovanni surprise, that reflects years of honing his craft. Now, that surprise can be found not only sitting in his restaurant, but also his food truck, Il Viaggio dei Sapori, and his newly founded chef school, GastroHub.

Coming back to Piatra Neamt was not an easy decision for Giovanni once he found success, and he often mentions his main disappointment: “It is extremely difficult to do what I want to do in this place. It is in the middle of nowhere, and people do not quite understand what I am cooking. Most of my clients are either the same or come from bigger cities”, Giovanni says. Finding the right staff was not easy either, given the shortage of highly qualified people in the region, but somewhere, along the road, Giovanni hired Radu.

In the first few days of his new job, “you could notice that Radu did not have all the qualifications he mentioned in his CV, but that didn’t stop me to admire his work ethic and potential”, remembers Giovanni. In over one year of working together, Radu has learned a lot from Giovanni about both the kitchen and life. “The things he does with the food, the flavors you find in his recipes are, for me, something unique”, says Radu about his new mentor.

In Romania, many young people coming from difficult backgrounds, such as Radu, have a low chance to encounter a role model or even a teacher dedicated enough to inspire them. As the Mental Health Foundation reports, mentoring means that one advises, supports, and guides another in the right direction. This process tends to help with reducing anxiety levels and increasing self-confidence. Moreover, it is defined as an act of kindness, that, for some, may never have the chance to happen, especially in one of the poorest regions in the EU. Therefore, for people with similar backgrounds as Radu, their professional path may get clearer, and their talents may be recognized, only with help from mentors.

As for their personal decisions, they are also often influenced by the kind of people they have around, and Radu had only his grandma to trust, until recently. “Radu is like my younger brother, and I hope I could fill up some of the spaces his parents left empty”, says Giovanni.

Stefan has had a rather radical career change in recent years, shifting from computer science to journalism. His goal is to bring out people's stories, with a focus on social injustice, environmental protection and sports.