Book review: Anne Applebaum’s Twilight of Democracy. The Failure of Politics and the Parting of Friends 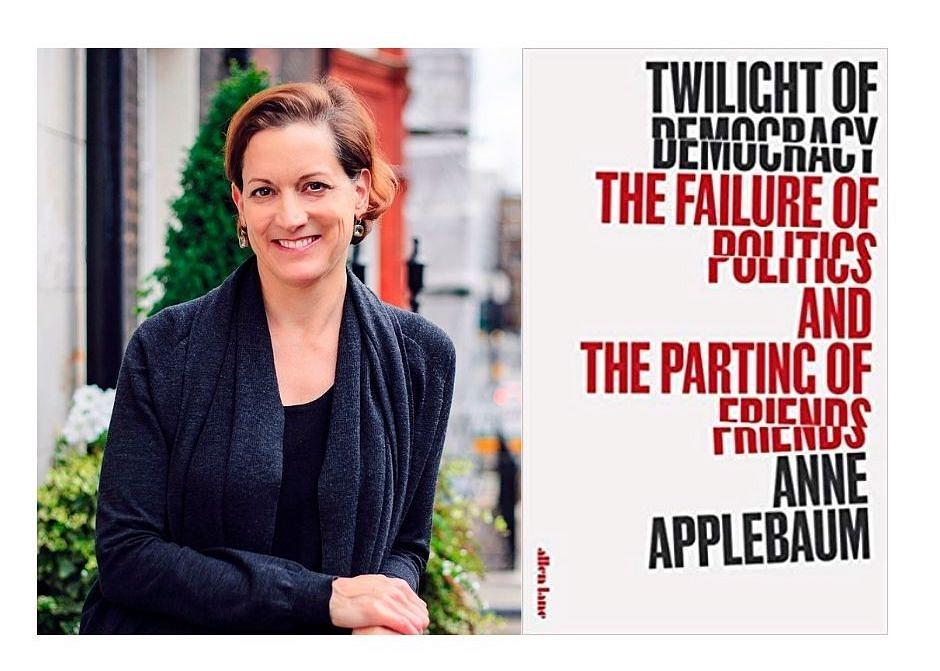 Guest writer Raul Pavel from Carturesti bookshop reviews a book published in July 2020, which uncovers stories from the last three decades since the fall of communism, as a reminder that democracy needs fighting for every day.

Anne Applebaum is a well-known historian of communism, her works covering subjects like the Gulag, the Ukrainian Holodomor and the Iron Curtain, among others. Twilight of Democracy is an exception to her usual academic work, having a more essayistic/journalistic style and form, and a distinct autobiographical accent. If one could argue that this means a lower level of conceptual rigor and argumentative precision, we can say that it is well compensated by a wealth of insights.

Twilight of Democracy starts simple enough with a New Year’s party in Poland. The year is 1999 and there is a thick atmosphere of optimism among the many guests. Optimism for the future of Poland, for democracy and for Europe. Fast forward 20 years later and all that has succumbed to a certain cultural despair regarding Poland’s and Europe’s future. Most of the former guests do not talk to each other anymore, being divided into separate political camps. Some kept their original political affiliations and principles, while others diverted into more extreme and conspiratorial ones. What went wrong?

Anne Applebaum invokes from the start the famous 1920’s work of Julien Benda, La trahison des clercs (“The betrayal of the intellectuals”) as precedent for her own book. Benda described how intellectuals and the elite could be instruments through which authoritarians rise to power. In the current context, the rise of populist far-right and far-left movements cannot be explained without identifying the intellectuals and thinkers that diffuse to the public the main talking points of the authoritarian political leaders. Their role is to identify sections of the population that would respond to their messages and then construct an identity that resists counter-narratives, empirical evidence or expertise. The new clercs must construct alternative realities, ones that could convince people that breaking the law and undermining democratic institutions is in the people’s best interest and is done for the betterment of the nation.

For Applebaum, this is not just a cyclical moment of history. The new political landscape has been irremediably transformed by new technologies of communication and the consumption of information. This allows one to be enmeshed in one’s own illusions and closed-circuit community. Also, it can provide cover to nefarious actions, while keeping the party’s public image clean. Troll farms, the production of fake news and bots that spread disinformation are just a few of the tools at their disposal. The new autocrats do not have a clear ideology anymore, although they still have a few common themes – anti-immigration, anti-globalization, anti-LGBTQIA, anti-Muslims etc.

The current clercs are pushing the narrative that the old democratic institutions cannot cope with contemporary events. That meritocracy is and was a lie; that the past hides a truth that we must rediscover in the present; that a new language is needed in politics, one that simplifies the complexity of the world, even at the risk of breaking the law and subverting democratic processes; that there is an urgency to act that requires radical action or else…

The analysis of an ideological conceptual apparatus is a moot point in this moment, politicians catering to and constructing identities that follow no clear ideological frame. Former small `c` conservatives, the mainstream of the old conservative parties, have been replaced by hard right politicians that have no qualms in mixing old Left critiques of the state – the bourgeois character of democratic institutions and its soft reformism, with Christian moral angst and far-right memes.

These alternative realities are not Orwell’s Big Brother, but Medium-Sized Lies. Applebaum uses this notion to distinguish them from former totalitarian regimes. Albeit we are not, yet, at risk of repeating the still very recent memory of dictatorships, Medium-Sized Lies are tools that undermine, under the guise of `alternative facts`, `alternative realities` and `alternative explanations`, the trust in institutions, experts and authorities. When the world we live in has lost its `common` side, what we are left with is a brutal strife for power where the winner takes all. Politics as a fight for survival.

Despite its shortcomings – a focus on individual actors and their private interests, the lack of a larger historical picture – , Anne Applebaum’s book is a sober reminder that democracy is not a given, and that we must participate and fight for it every day.

Anne Applebaum’s Twilight of Democracy. The Failure of Politics and the Parting of Friends

Raul Pavel is a former bookseller and bookstore manager at Cărturești. As foreign books purchase manager, he is currently in search for the next best read.

This article was written by a guest writer under an editorial partnership and may include affiliated links, which means that we might receive a small commission if you purchase using these links.