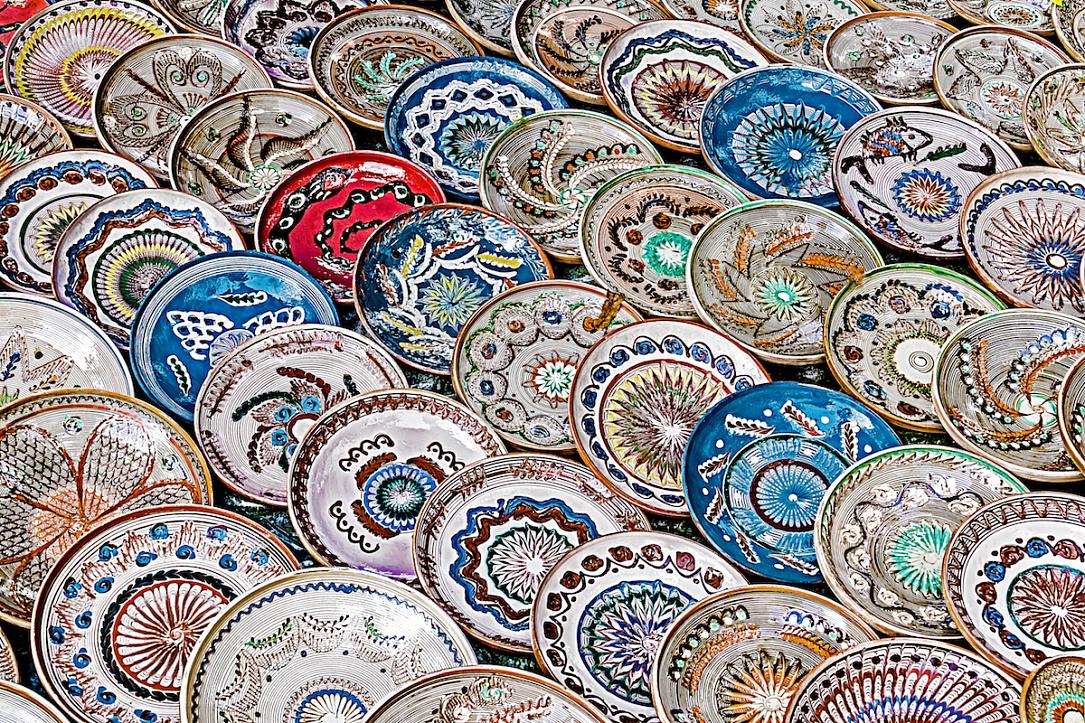 When it comes to traditional arts & crafts, Romania has many places where these are still practiced. From seasonal customs to year-round endeavors, we highlight below several craft centers that also double as travel destinations.

Horezu, located in southern Romania’s Vâlcea County, is where a unique type of ceramics is produced. Included on the UNESCO List of the Intangible Cultural Heritage of Humanity, it is handmade, in a process where both men and women participate, passing on the knowledge and craftsmanship of previous generations. Men select and extract the earth, which is then transformed into clay, which the potters shape using “a special finger technique requiring concentration, strength and agility.” The women decorate the objects with traditional motifs, in colors that are vivid shades of dark brown, red, green, blue and “Horezu ivory.”

The small town of Horezu, which has a population of less than 7,000, is also home to the Horezu Monastery, a UNESCO World Heritage site. The monastery, established in 1960 by Romanian prince Constantin Brâncoveanu, is considered a masterpiece of the Brâncovenesc style, also known as the Wallachian or Romanian Renaissance. The style is recognized for its architectural balance, rich sculptural details, votive portraits, and painted decorative works.

Those with an interest in ceramics can further explore the commune of Corund, in central Romania’s Harghita county, one of the best-known pottery centers in the country. For the making of the vessels, the clay is kneaded with a bit of water, cleaned of impurities, cut into stripes and modeled on the potter’s wheel. The Corund pottery is decorated with floral or stylized zoomorphic motifs and can be white, brown, cobalt blue or multicolored.

Corund is located close to the Praid salt mine, and 29 km south of Sovata, a resort known for its salty lakes and beautiful surroundings. Some 75 km east of Corund is Târgu Mureș, a city which is worth visiting for the reasons we list here.

In northeastern Romania, the village of Marginea, in Suceava county, is known for the production of black ceramics, a craft that is believed to have started here around 1500. The black color comes from the way the clay is burnt. At some point in the burning process, the kiln is closed and the vessels burn in the smoke, which slowly penetrates the clay, turning the ceramics black.

The north-western Romania region of Maramureș is known, among other things, for the beautiful woodwork that is crafted here. A wide range of wood-carved items are made in the region, from plates to furniture, while the wooden gates of the houses in the Maramureș villages or the wooden churches are some of the most exquisite examples. The wooden churches, which are listed as UNESCO’s World Heritage sites, are recognizable by their narrow constructions, featuring tall and slim towers. Some of the most beautiful are those of Bârsana, dating back to 1720, and of Budesti Josani, Desesti, Ieud, Surdești, Plopiș, Poienile Izei, and Rogoz. Another craft that has a myriad of expressions and forms in the region is that of textiles, ranging from the traditional dress and colorful rugs to bags, bed sheets and table cloths.

When it comes to carpets, the traditional wall-carpet craftsmanship practiced in communities across Romania and the Republic of Moldova is also on UNESCO’s Representative List of the Intangible Cultural Heritage, as an “expression of creativity, identity and tool for social cohesion”. Traditionally, the wall carpets were used for decoration, funerals, or as part of a bride’s dowry, although today they are mainly enjoyed as works of art. To discover more of the local art of rug making, a route is outlined here.

For a more focused experience on the richness of the textile tradition in the country and elsewhere, the Textile Museum in Băiţa, in Hunedoara county, gathers a variety of flat textiles, costumes, accessories and tools from Romania, Eastern and Central Europe, Western Europe, the Near East, India, Central Asia, Japan, China, Southeast Asia, Africa, Oceania and the Americas. Băiţa is located 38 km north of Hunedoara, the home of the Corvinilor Castle, a Gothic-Renaissance edifice that is among the country’s most visited tourist sites.

With Easter approaching, another craft to discover in the country is that of painting eggs. Most people paint eggs for Easter but the craft of decorating eggs entails a much more laborious work, with the eggs being decorated with intricate patterns. The tradition is practiced in many parts of the county, but the region of Bucovina is a good place to see the craft at work. There are also several museums dedicated to this craft here, among them the one in Vama. Its collection includes eggs decorated with traditional motifs such as rake, the sun, the clover, floral motifs, religious motifs, zoomorphic motifs, but also decorated eggs from countries such as Hungary, Ukraine, Switzerland, Poland, Italy, Malta, Slovakia or Russia. Other similar museums are found in Moldovița and in Ciocănești, a commune known for its beautifully-decorated houses.