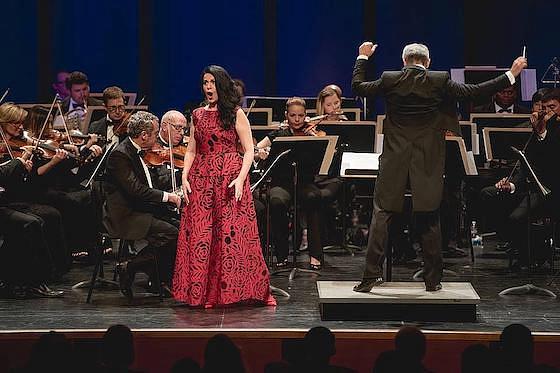 Four well-known Romanian songs recorded by soprano Angela Gheorghiu accompanied by the Royal Philharmonic Orchestra, conducted by Gavin Greenaway, have been released in a digital format by Warner Classics & Erato.

The four songs are Sanie cu zurgălăi (translated as Who Knew), Barca pe valuri (Branzen - Weep), Ionel, Ionelule (The One That Got Away), and Mai spune-mi că nu m-ai uitat (This Is Your Life). They are available on iTunes, YouTubeMusic, Deezer, and Spotify.

"The idea of recording these works came naturally because I always listened to various styles of music- pop, jazz, folk or rock – and I was delighted to explore them. All these four works are well-known in Romania, and I have been listening to them since I was a child," Angela Gheorghiu explained.

"These recordings are just a beginning in my desire to give my audience more dreaming moments, good vibes, sometimes a little melancholy, but mostly optimism and joy in these pretty troubling times, in which we need good music. I will continue my searches in the vast Romanian and international repertory still unexplored by my voice. I hope that my joy will embrace you all because we need music; we need art in our lives," she said.

She received “La Medaille Vermeille de la Ville de Paris” and she was appointed an Officier de l’Ordre des Arts et Lettres and Chevalier de l’Ordre des Arts et Lettres by the French Ministry of Culture. In December 2010, she was awarded the Star of Romania, the distinction given by the President of Romania. In October 2015, she received the European Cultural Award for Music in Dresden. In February 2018, Gheorghiu received the Victoire d’Honneur Award at France’s Les Victoires de la Musique Classique. In December 2018, she received the Premio Puccini for her Puccini interpretations.