Winter special: Where to go skiing in Romania during the pandemic 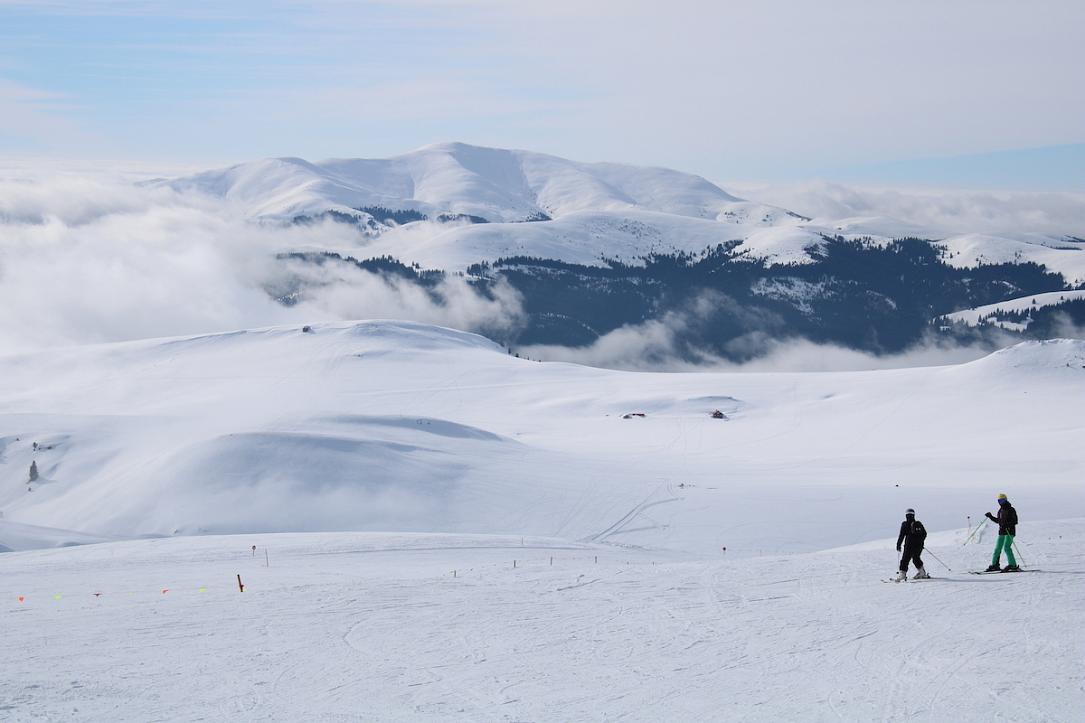 The always-changing travel restrictions have been making trips abroad quite tricky this year, so most winter sports fans in Romania turned to local mountain resorts for skiing or snowboarding. And, after a rather warm season in December, the recent snowfalls allowed the opening of more slopes across the country.

If you're planning to try the slopes in Romania, check the short guide below for information about ski resorts, facilities, or possible measures implemented at the local level to control the spread of COVID-19.

The four ski resorts in Prahova Valley - Sinaia, Busteni, Azuga, and Predeal - are probably the first choice for most people living in Bucharest. A reality proved during winter holidays or on weekends when the DN1 national road linking the capital to Prahova Valley gets extremely crowded. Major traffic jams usually form around the cities of Comarnic or Busteni, forcing drivers to spend more time on the road than initially planned. So it might be better to plan a vacation during the week or try the other travel option: take the train.

Sinaia was among the first ski resorts in Romania to open the slopes this winter season. Thus, in mid-December, hundreds of winter sports fans flooded the slopes at Cota 2000, forcing the authorities to take extra measures to make sure that skiers respect the distancing requirements.

In this mountain resort, several measures have been introduced to prevent the spread of the coronavirus on the slopes: mask wearing is compulsory when queuing and using the transport installations, and tourists are required to practice social distancing.

Several slopes located at 2,000 meters altitude are open in Sinaia, such as Lăptici 1, Lăptici 2, Valea Soarelui 1, Valea Soarelui 2, and Valea Dorului 1, and most of the cable transport facilities are open for tourists. However, on some days, the bad weather forced the operators to keep the gondola lift, cable car, or chairlift closed, which can happen again. Thus, it's recommended to check the information here and here before going up for a ski or snowboard ride.

Most hotels and restaurants are open in Sinaia, as the mountain town is in the yellow scenario (meaning that the 14-day incidence rate of COVID-19 infections is below 3 per thousand inhabitants). In this scenario, the indoor restaurants can operate at 30% capacity, but the tourists can also enjoy a hot chocolate or a tasty meal on outdoor terraces. Some of the restaurants in the city center have installed heaters outdoors to keep their customers warm.

Coming from Bucharest, Busteni is the next ski resort after Sinaia, the distance between the two being some 10 km. This resort's main ski domain is Kalinderu, and the operators announced that the Kalinderu 1 ski slope is now fully open. Plus, the 4-seater chairlift is operational, and the rental center is open as well.

Similar to the rules in Sinaia, wearing a protective mask so as to cover the nose and mouth is mandatory for all persons who have reached the age of 5, in all open public spaces, when queuing at the chairlift, and in the crowded areas.

According to the latest update of January 11, Busteni is also in the yellow scenario, which means that the indoor restaurants are allowed to operate at 30% capacity. Accommodation is also available at hotels and guesthouses.

Information about the Kalinderu ski slopes is being updated here.

Azuga is the right choice for beginners, but more advanced skiers or snowboarders can also have some real fun here. The last days' snowfall also allowed for the opening of several ski slopes in this resort, including parts of the Sorica and Cazacu slopes, and the transport facilities. Updates are being regularly published here and here.

The restaurants are also open in Azuga, and the hotels and guesthouses are awaiting tourists.

Located bout 150 km north of Bucharest and only 24 km away from Sinaia, Predeal is also a popular ski destination in Prahova Valley. One of its best slopes, Clabucet, opened for skiers on January 12, and so did the transport facilities. Thus, winter sports fans can also add this destination to their list. Updates are published here.

Many hotels in Predeal are also awaiting tourists in this period. In fact, a plus for Prahova Valley is that those who plan a longer ski vacation in this area can choose to find accommodation in one of the four ski resorts (Sinaia, Busteni, Azuga, or Predeal) and then drive or take the train to the other ones. This way, they can enjoy the ski offers of all four mountain towns.

Poiana Brasov is one of the most popular ski resorts among Romanian winter sports enthusiasts, attracting many tourists every season. Located in Postavaru Mountains, close to the well-known Brasov, Poiana Brasov can be reached by car and train.

According to the daily snow report and ski conditions published on January 12, several of the resort's slopes await skiers with quite thick layers of snow. Among them, Drumul Rosu, Kanzel, and Lupului. Plus, most of the cable transport facilities are open, including the Capra Neagra and Kanzel cable cars or the gondola lift. The updated reports can be found here.

According to the local media, the city of Brasov (and thus Poiana Brasov as well) is still in the red scenario (with a 14-day incidence rate of COVID-19 infections is over 3 per thousand inhabitants), and this means that the indoor restaurants are closed here. Moreover, similar to the other ski resorts, tourists have to respect the rules to prevent the spread of COVID-19, including to wear masks in public spaces and practice social distancing.

There are many accommodation options in Poiana Brasov, and a quick search on dedicated platforms can help travelers find the best options. However, as the resort is just about a one-hour drive from Predeal and around a 20-minute drive from Brasov (if the road doesn't get too crowded, as it usually happens on weekends), Poiana Brasov can also be a good choice for skiers staying in the other two mountain cities.

Straja, in Hunedoara county, was also among the first resorts in Romania to open the winter season. In fact, this was one of the busiest mountain resorts in the country in recent weeks, attracting large numbers of tourists during the winter holidays. Thus, those planning a ski trip here should expect long queues at cable transport facilities.

There are 12 ski slopes in Straja, according to Prostraja.ro, which means that tourists can enjoy almost 30 km of ski & snowboard area. Accommodation is also available in the area.

Sureanu ski complex is also popular among Romanians, and the good news is that most of its ski slopes are open. According to data on Sureanu.com, seven of the ten slopes are ready for skiers, including Ausel A1, Ausel A2, and Ausel A3, and the Cumatura slopes. The restaurant at the base of the slopes is closed, but tourists can relax at several apres-ski places that are still open. The best and easiest way to get there is by car.

Another popular destination in the winter season is Cavnic, in Maramures county, in northern Romania. The best way to get there is by car. However, it's a very long drive from Bucharest. According to information shared on January 10, only 30% of the slopes and cable installations are currently open in this mountain resort. In fact, Roata 1 slope and chairlift are the only ones fully open at the moment. Further details here.

The Parang domain, located not far from the city of Petrosani, also comes with a wide ski area. According to the report on the snow and ski conditions published by Romaniaturistica.ro, three of the ski complex's slopes are currently open, namely Telescaun, A, and B. The chairlifts are also operational. Accommodation is available in the area at several guesthouses.

The number of ski slopes of cable transport facilities open for tourists can change due to weather or other restrictions in place at the local level. The latest information about the ski resorts in Romania can be found on the local authorities' social media pages or websites, as well as on the resorts' social media pages. The Facebook page Info Schi Romania also shares updates. For this article, we've also checked the report on the snow and ski conditions published by Romaniaturistica.ro.

Romania is currently under a state of alert, and this means that several restrictions are in place nationwide. For example, masks are mandatory in all public spaces, and people's movement is restricted during the night (23:00 to 5:00), with some exceptions. Additional restrictions, such as the closure of restaurants, are taken at the local/regional level depending on the 14-day rate of infection of each county or city/town. These are usually announced by the local authorities via social media or on their official websites.