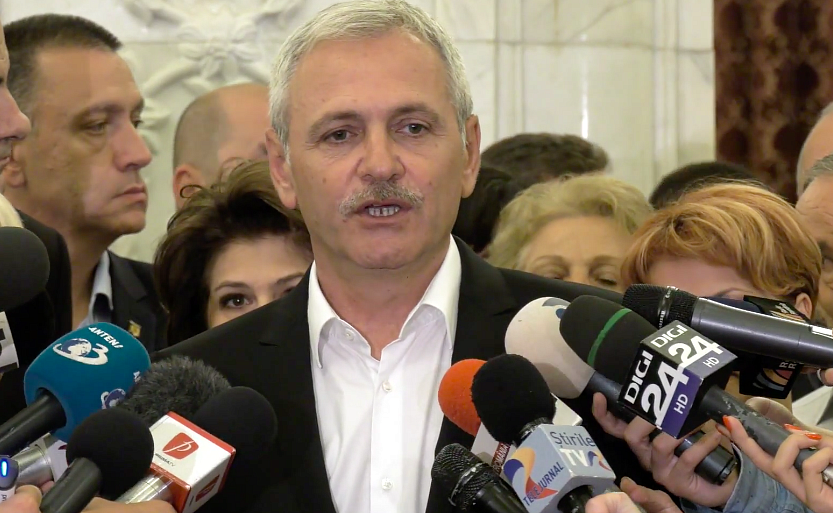 The leader of Romania’s ruling party, Liviu Dragnea, will continue as president of the Chamber of Deputies and party leader despite the conviction to three and a half years of jail time ruled against him by the High Court of Cassation and Justice, he said after a meeting of his party’s Executive Committee, which unanimously decided to support him on Friday.

Dragnea was sentenced to jail for instigation to abuse of office, on Thursday. Prime minister Viorica Dancila and other leaders of the Social Democratic Party (PSD) immediately jumped to support him, claiming that the judges ruled arbitrarily, under pressure from street protests and the “shadow state”.

As the court’s decision is not final, Dragnea can file an appeal. However, he will probably not wait for the final decision and try to change the criminal code to remove the offence for which he was sentenced. He made that clear during his first press statement after the Court’s decision.

“My decision is firm: I will stay at PSD’s helm to complete what we have started, I will also stay at the helm of the parliamentary majority, the no-confidence motion will not pass. We have decided to be more firm and radical with what we have to do,” the PSD leader said.

“I ask the thousands of Romanians, some of whom are now in jail due to an unconstitutional article while others have been dragged through court based on the same soviet article, to forgive me. I apologize for the long delay in changing the Criminal Code,” he continued, adding that he was wrong to try and pass these changes through the Parliament.

The ruling coalition made of PSD and the Alliance of Liberals and Democrats for Europe (ALDE), adopted several important changes to the justice laws at the end of last year, but they were all challenged at the Constitutional Court and blocked until now. The Parliament also recently voted important changes to the Criminal Procedure Code, which limit the prosecutors’ powers and give more rights to those investigated, but these changes too were challenged at the Constitutional Court.

Dragnea also said he expected his party’s recent offensive against the shadow state, which culminated with a rally of some 150,000 people in Bucharest’s Victoriei Square, to lead to his conviction. “My objectives remain the same: implementing the governing program and crushing the shadow state. And it will be crushed,” Dragnea added, warning that he wasn’t scared of anyone.

The leader of the opposing party Save Romania Union (USR), Dan Barna, warned that PSD may try to pass the changed to the Criminal Code, which are now under debate in the Parliament, by emergency ordinance, which would have them enforced immediately.

PSD tried a similar approach at the end of January 2017, one month after winning the parliamentary elections. The Government then passed a controversial emergency ordinance that partly decriminalized abuse of office if the damage was under RON 200,000 (EUR 43,000). However, the Government repealed the ordinance before it came into force, after the biggest street protests Romania has seen in over 20 years.