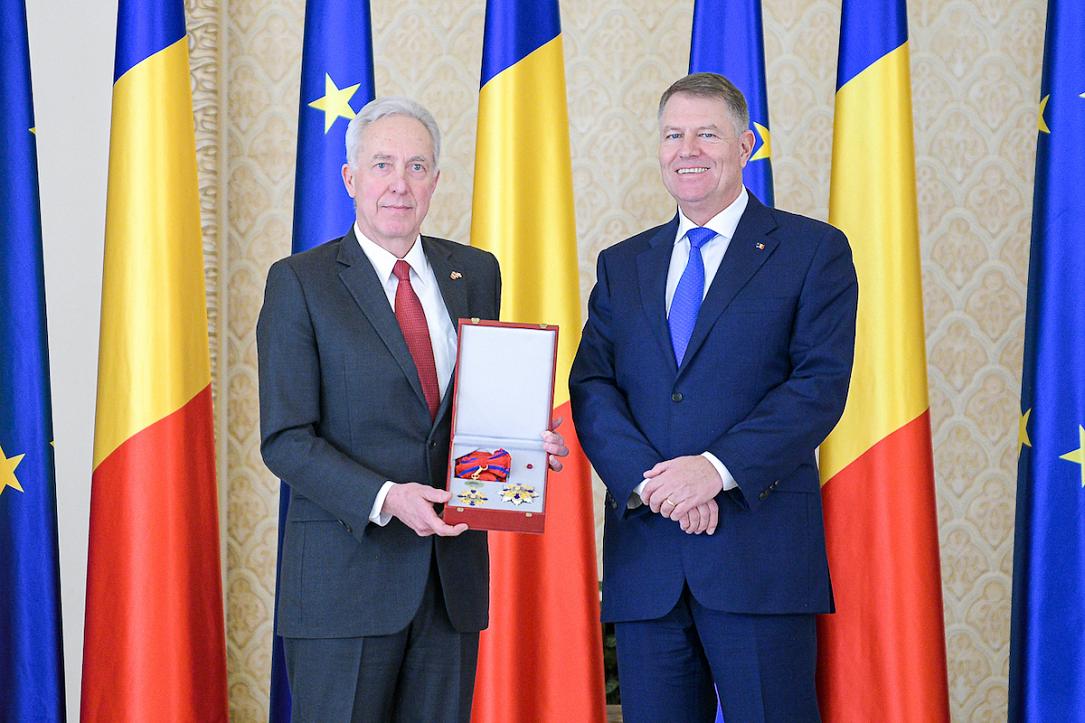 Romania’s president Klaus Iohannis awarded on Tuesday, December 10, the Star of Romania order in the Great Cross degree to Hans Klemm, who is close to ending his assignment as U.S. ambassador to Romania.

“As a sign of high recognition and appreciation for the personal involvement in the development of relations between our country and the United States of America, for the strengthening of the Romania-US Strategic Partnership, president Klaus Iohannis conferred the National Order "Star of Romania" in the degree of Great Cross to His Excellency Mr. Hans Klemm, the extraordinary and plenipotentiary ambassador of the United States of America in Bucharest,” reads a statement of the Presidency.

It has become a custom that US ambassadors are decorated by Romania’s president at the end of their terms. Former ambassadors James Rosapepe, Nicholas Taubman and Mark Gitenstein, also received the Star of Romania order in the Great Cross degree. No other foreign ambassadors have received this distinction. The Star of Romania – High Cross is generally awarded to high foreign officials such as prime ministers or presidents of international organizations (European Parliament, NATO). High Cross is the second-highest degree for the Star of Romania order, after Collar, which is generally awarded to heads of state.

Hans Klemm, who started his mission in Romania in September 2015, during the Obama administration, has witnessed the agitated period in the country’s politics in the last three years. He and other foreign ambassadors intervened firmly on several occasions when the former Social Democrat Government took decisions that negatively impacted rule of law in Romania, urging the politicians in power not to go on that path.

US ambassador: Justice changes in Romania threaten to turn back clock to early 2000s

At the same time, Hans Klemm continued to support Romania’s National Anticorruption Directorate (DNA) and its former chief prosecutor, Laura Codruta Kovesi, even as the former ruling coalition in Romania increased the pressure on the institution and its head.

He also criticized some of the decisions taken by Romanian lawmakers and former Government, with an impact on the business environment and the interests of American companies in Romania, such as the offshore law.

His firm positions on such sensitive issues have also brought him criticism from politicians in power, such as former foreign affairs minister Theodor Melescanu and former Senate president Calin Popescu-Tariceanu.

During his mandate in Romania, Hans Klemm has also traveled across the country to promote cultural ties between the two countries.

Hans Klemm will be replaced by Romanian-born attorney Adrian Zuckerman, who was recently validated by the U.S. Senate for this position.