Skip to main content
Profiles & Interviews
Bringing Verdi to a village near you: how urban and rural connect in Romania 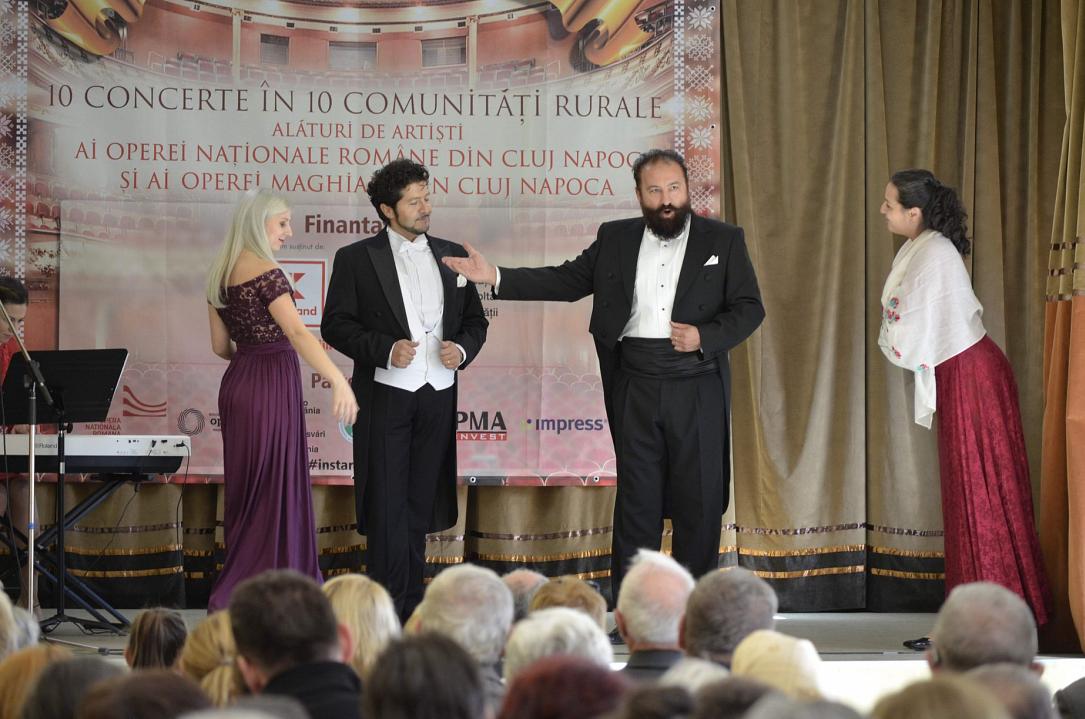 Hai în Sat, an association established last year in Cluj county, has several projects connecting the rural and the urban, offering the residents of both an experience of the other.

Alin Pop, a founding member of the association, recalls noticing shortcomings in the experience of living in both environments and wanting to do something about it. This came from personal experience also. “I live in Cluj-Napoca, but my roots are in a village 10 km away from Cluj, Suceagu where I also have a house and I end up staying sometimes overnight,” he says.

Seeing that cultural events are difficult to access in villages and urban residents spending a lot of time in between the walls of apartments or the stores in malls prompted them to look for and offer some alternatives. “We said let’s each do our share and work where we can so as to create a bridge between the two worlds and open up some contexts allowing the two worlds to interact,” Pop explains.

One of the projects that the association already rolled out is Hai în Sat la Operă, consisting of ten opera performances in ten villages in Cluj county: Suceagu, Viștea, Mărișel, Aghireșu, Mera, Coruș, Popești, Sâncraiu, Baciu, and Mănăstireni. Musicians of the Romanian National Opera of Cluj-Napoca and the Hungarian Opera of Cluj-Napoca performed in the program.

Most of the villages where the concerts took place have some infrastructure to host cultural activities but they lack the cultural programming, Pop explains.

“In many villages, there are these refurbished cultural centers (cămine culturale) but they are almost completely missing the cultural component, after which they take their name; they serve as dining halls at funerals and that’s about it. It is a reality. So we came up with projects that bring culture to villages, in Cluj county for the time being.”

Pop says they chose opera performances in order to expose the audience to a genre they don’t get easy access to. “We have pending projects involving theater, jazz, not so much folkloric music for a very simple reason: they are used to folkloric music, they hear it every day, on the radio or elsewhere. We want to bring them other types of culture and opera is one of them, perhaps the most important one,” he says.

The urban-rural gap when it comes to the availability and diversity of cultural events has long been noted. The 2016 edition of the Cultural Consumption Barometer, released by the National Institute for Cultural Research and Training, showed that over 95% of the residents of rural areas never went to an opera or philharmonic performance in the past year.

At the same time, the program covered pieces that the public could welcome easily. “It was an accessible program, with pieces that anyone could hum along to […]. We went with Romanian artists who wrote remakes of popular pieces; we had Verdi, which was very well received, Brindisi from La Traviata, parts from Rigoletto, these were very well received moments,” Pop says, recalling a diverse and enthusiastic public. “We saw in the audience people who got emotional, who wanted to stand up, to dance, and many applauses.”

Once word of the performances got out, they started to get phone calls with requests to add more villages to the list of locations where performances would take place. “They started calling us, priests, mayors to ask us to come to their village as well. But we were talking about some costs and we had the schedule set two months before starting. We had the first show in October 2018 and the program was set at the end of August,” Pop says.

A total of 1,221 people attended the ten performances in the Hai în Sat la Operă program, while the organizers aimed for at least 100 people per performance. The association kept track of the attending public by offering free tickets. At the end of each performance, they held a raffle, and the winner received an invitation for two people at a performance of the Romanian or Hungarian Opera House in Cluj-Napoca. “So twenty people who never went to the Opera before had the chance to see a performance.”

Green-thumbs get to work

Meanwhile, ten families from Cluj-Napoca come to Suceagu grow their own vegetables on a plot of land of the association. The project, called Hai în Sat la Grădină, kicked off a month ago and makes available ten gardens to ten families living in apartment buildings in the city.

“The HQ of our association is in Suceagu. There we have a rather large plot of land, and we took a 1,000 sqm plot and we divided it into 10 gardens of 100 sqm. Ten families with children are already coming there,” he explains. The project was conceived with children in mind, “looking at the opportunities they might have to learn. We talk about the plants they grow. We want to get them involved in a fun way. We want them to want to come to the garden, and return.”

At the same time, the association organizes tours to the villages in Cluj county, where visitors can experience country life and take part in various village household tasks.

As the opera program was well received, the association hopes to be able to expand the project. “We are waiting to see if we will receive the financing. We want to have 20 performances in 20 villages, in four counties: Cluj, Alba, Sibiu, Sălaj. We selected five villages in each county. We selected villages that already have a cultural activity going on, either a crafts workshop or a specific custom. We selected them so as to let them understand somehow we want to reward them because they also do something for the community.”

Another project pending financing, and modeled after the opera one, involves theater performances. Hai în Sat la Teatru would see the association work either with performers of the National Theater in Cluj-Napoca or with folk theater companies. “We had talks with people involved in this kind of art and they are willing to make time to come, in places where we see the desire of some people to set up a folk theater company to come and teach them. To teach us how they did it and we would take it further.”

Because this is the Year of the Book in Romania, the association also thought of organizing reading evenings in villages, where contemporary authors would come and “interact directly with the public, especially with the young, and motivate them to read.” The project, Hai în Sat la Lectură, also depends on finding financing.