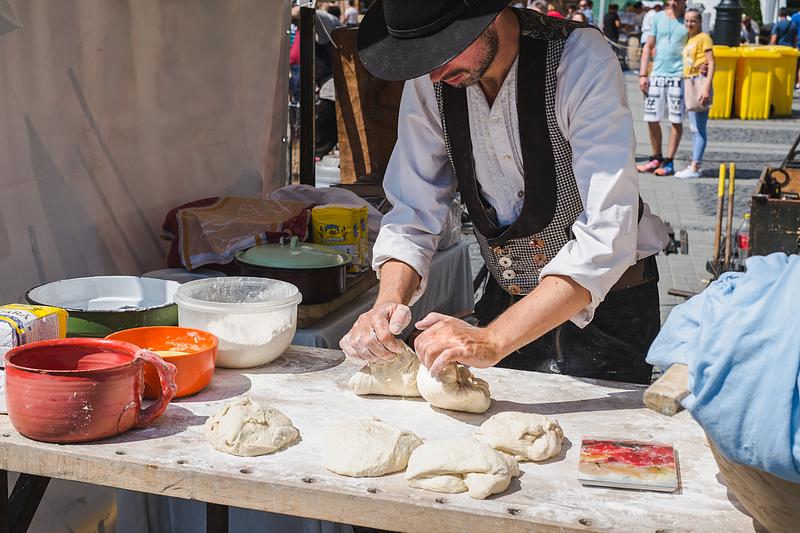 Discovering a region’s food specialties is part of the fun of any trip, and an increasing number of local initiatives are looking to highlight the traditional regional foods. We outline below some destinations and activities to try.

A European Region of Gastronomy in 2019, Sibiu is one place to see on a food tour of the country. The region is known for its cheese and meat delicacies, including the Telemea de Sibiu, a semi-hard cheese made from sheep’s milk. It is still made entirely from raw, unpasteurized milk, as was the case in the years before modern pasteurization techniques were developed, and most of the production process is undertaken by hand, with producers relying on traditional tools and techniques. Telemea de Sibiu was awarded EU’s protected geographical indication (PGI) status in 2019. It is one of the many cheeses produced in the area Mărginimea Sibiului, alongside urdă or brânză de burduf, among others.

Bakers in the region make the tasty potato bread, but also flax seed bread, pumpkin seed bread and sunflower seed bread, made in large loaves. Furthermore, the farmers in the area take pride in products such as Avrig sweet potato, Moşna cabbage, Ludoş cucumbers, Sibiel apples, Cacova (currently Fântânele) red apples or Cisnădioara sweet cherries and visitors can also sample the apple juice from Slimnic or from Mălâncrav and many other berry syrups, fir bud syrup or honey-sweetened elder juice, but also the Tălmaciu plum brandy (ţuica) or Sadu brandy (rachiu). Reflecting the region’s ethnical and cultural diversity, there are also the Saxon hencles or the Hungarian poppy seed sponge cake to try.

Besides trying the local food when visiting Sibiu or the villages in the area, the local products can be sampled or purchased at various fairs organized by the Astra Museum in Sibiu or at events held in the region, which range from fairs dedicated to specific products to street food festivals or events dedicated to the Saxon heritage, like the Haferland Week.

Highlighted a few years back for its café culture, Cluj-Napoca is another base to explore the area’s culinary traditions. One dish to try is the one that carries the city's name: the cabbage-based Varză a la Cluj (One recipe for it to try at home is available here). Many other cabbage dishes can be tried at Vărzărie, one of the best-known restaurants in the city, open since 1967. They also serve vargabéles, a sweet noodle and cheese pie illustrative of the area’s multicultural history and the mix of culinary influences. Served at many hearty meals are the popular fruit brandy varieties pálinka and țuică.

Another region where several cultures meet, Banat captures a variety of influences in its gastronomical offer. Cream, flour  thickener rântaș, and home-made noodles feature in many dishes. Those who visit the area can try the sour soup ciorbă, with added cream and home-made noodles, iofca –a noodle dish with added cheese, walnut, milk, poppy or cabbage, or the region’s sarmale, which are bigger than the ones prepared in other parts of the country and made with meat minced with the cleaver. An initiative rolled out this summer by the Association to Promote Tourism in Timiş county has seen old recipes from traditional cuisine included in the menus of restaurants in Timişoara, a place that can serve as a base to explore the region’s gastronomic offering. Among them were zupa cu găluşte (dumpling soup) and gomboţi cu prune (plum dumplings). Another initiative, from the NGO Acasă în Banat, is collecting recipes and stories about the dishes of the area. They are available in the project La Masa în Banat. The same association is behind an effort to breathe new life into the water mills of the area, the most famous of which are found in Rudăria – Eftimie Murgu, a place with its own specialties. More about it in this article.

Known for the painted monasteries erected in the 15th and 16th centuries, today UNESCO heritage sites, the local part of Bucovina brings its share of tasty dishes to the table. Among them ciorbă rădăuțeană, a chicken soup with vegetables and a thickened broth, or tocănița de hribi – boletus stew. A recipe for Ciorbă Rădăuțeană is available here.

An area impressive for its biodiversity, and also a UNESCO heritage site, the Danube Delta is a place to try numerous fish dishes – soups, grilled varieties, saramură (soaked, sprinkled, or boiled in brine) and many more. When it comes to sweets, there is the cozonac (sweet bread) made according to local recipes, or the dumpling varieties piroșcă and vareniki. Traditional recipes, reflecting the area’s cultural diversity, have been collected in this project.

The traditional farmers’ markets are another option to sample local products. In addition to season fruit and vegetables, mostly locally-sourced, they are also spots where small producers sell a variety of preserves, including pickled vegetables and sour cabbage, the vegetable spread zacuscă, honey and syrups.

Among Bucharest’s markets, Obor is one of the largest and oldest. Laid out on several levels and halls, it hosts butcher’s shops, fishmongers, shops selling dairy and cheese products, bio or eco products, medicinal and aromatic plants (plafar), as well as stalls selling spices, sweets and biscuits, but also detergents, carpets and interior design items, and repair or key duplicate shops. It sits close to the store of the same name, one of its kind in the city, hosting a variety of stores and products, from haberdasher’s and fabric stores to leather goods, tailor’s and watch repair shops. More about traditional markets in Bucharest here.

One way to have a culinary experience and spend some time in nature is to go on a truffle hunt alongside professional hunters in the forests in Transylvania or in the region of Buzău. Among the locations offering such an experience are Valea Verde resort in Cund or Terra Carpatica - Conacul Grigorescu in Buzău. A recipe for a Carpathian Truffle & Mushroom Macchiato is available here.