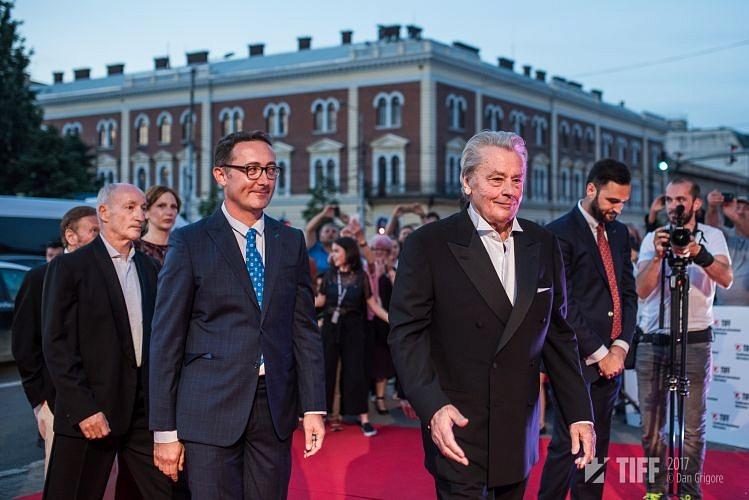 French film icon Alain Delon, who was recently in Romania to receive the Lifetime Achievement Award at the Transilvania International Film Festival (TIFF), declared himself impressed with the way he was welcomed in Cluj-Napoca, the western Romania city where TIFF takes place. The 81-year old actor, who attended the open-air screening of his film For a Cop's Hide, explained he doesn’t get the same treatment in France.

“I have seen 3,500 people in a square. I’m not General de Gaulle, I’m not the president of the Republic. It is impressive. I enjoyed it, especially that this does not happen at home. I’m much more loved throughout the world than in France. They were always bothered by me there. It has to do with mentalities,” he said, quoted by Hotnews.ro.

Delon said he saw last year the film Graduation and that he enjoyed it. The French actor also admitted to not knowing very well the local cinematography.

Graduation is the latest film of Romanian director Cristian Mungiu and earned him the Best Director award at the 2016 edition of the Cannes film festival.

The actor was also shown a photo of a Romanian wearing an alendelon. In Romanian, the noun taking after the French actor’s name, refers to a leather coat with a lamb wool collar that became very popular and borrowed its name after Delon wore it in the movie Once a thief, directed by Ralph Nelson. Delon however said he did not remember wearing such a coat.

The French actor also mentioned the collaboration he had with Romanian-born actress Elvira Popescu, saying he would like to act in a film directed by a woman.

“Elvira Popescu is one of the women I most adored. Elvira was very important for the beginning of my career. I made my debut in theater, her theater. I performed with her in a play directed by Visconti and alongside Romy Schneider. I would like, before I die, to make a film with a woman director. I said I want to, no one proposed it to me, I didn’t have the opportunity. I would like to do this before I pass away,” Delon said.

The Transilvania Trophy, worth EUR 15,000, went to the Georgian film My Happy Family, directed by Nana Ekvtimishvili and Simon Gross. The film tells the story of a middle-aged woman who leaves her husband and home to build a new life for herself.

The Cinepub Audience Award, given to the most popular film in Romanian Days section, went to Planet Petrila by Andrei Dăscălescu. The film is a documentary about Petrila, a coal mining town in Transylvania, and an artist’s quest to preserve the history and the identity of his hometown, and to find new ways of keeping the community from falling apart.

The FIPRESCI Prize, offered by the International Federation of Film Critics for a film in Alt.Rom.Com section went to Afterlov/ Afterlove directed by Greek Stergios Paschos.

At the same time, the Transilvania Pitch Stop Awards section granted prizes worth a total of EUR 55,000. The Eurimages Co-production Development Award went to The Empty House by Rati Tsiteladze, while the Post-production services prize went The Man who Surprised Everyone by Natalya Merkulova and Alexey Chupov. La Civil by Teodora Ana Mihai won the award offered by the National Cinematography Center and Dacin Sara.

The full list of awards and winners can be checked here.

TIFF is the largest film festival in the country and took place in Cluj-Napoca between June 2 and June 11.