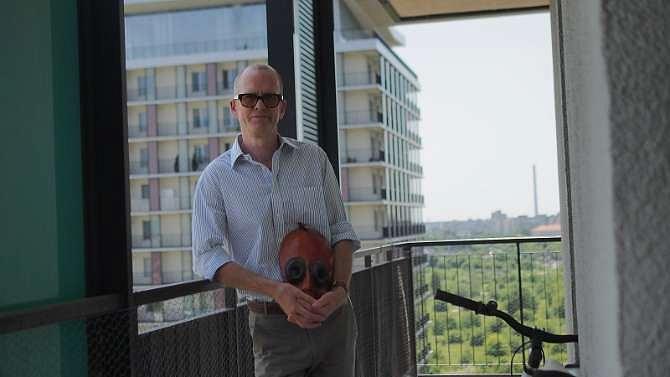 British writer Mike Ormsby talks about his recent novel on child sorcery in Congo, life in a quiet village in Transylvania, after he travelled the world and his faith in the healing power of music and words.

“A bad novel is a table that wobbles. A good novel is a solid table. I don’t know if my novel wobbles, I hope not,” Mike Ormsby says laughing. Judging by the good reviews his book  Child Witch has been receiving, it did not 'wobble'.

We meet a few hours before the Bucharest launch of  his two-part book Child Witch Kinshasa/ Child Witch London. Mike is tall, slender and in his 50s. A former BBC journalist, he first arrived in Romania in 1994, reporting about an aid convoy to Craiova. Twenty years later, he lives in a small, quiet village in Transylvania.

Mike got the idea for his most recent novel in the Democratic Republic of Congo, where he went with his Romanian wife Angela to train journalists. It was 2002 and the country was torn in half, after years of civil war, which resulted in the deaths of 5.4 million people since 1998. Tens of thousands of kids were living on the streets, many of them kicked out of their homes because they were accused of sorcery. A mix of poverty, traditions, and torn-apart families made people believe in sorcery.

There are no accidents in Congo, Mike explains. If you crash your car or your mom loses her job, for us it’s bad luck, but in Congo they’ll look for a sorcerer who’s done it. “They don’t choose the local boxer or the weight lifter. They’ll choose a little kid. A girl who has a bad eye or a boy who’s opinionated.”

Through a French priest who had a refuge for these kids, they met a boy whose back was badly burned because of exorcism. He became a character in Mike’s book.

He wrote the novel in ten years. He missed several New Year’s Eves, typing and hoping that he would finish this draft by the New Year. But he knew he had to write the novel. “I could not not write the story. Congo needs to be fixed. It’s a broken country and these kids need help.”

Mike and Angela are in their Bucharest apartment, which overlooks the Natural Park Vacaresti, a protected area, a delta where over 100 species of wild birds and animals live. In the morning you can hear lots of birds, says Angela. She is her mid-40s, has short hair and seems a passionate, yet discreet person. She has trained NGOs in conflict areas all over the world. She is also Mike’s first-hand editor and his “guardian angel”.

Mike says that a few years ago, teenagers would come and start fires in various parts of this delta. When firemen would arrive and put off the fire, they would start it in some other parts of the natural park.

Now the delta is green and quiet. A girl lies on a blanket and sunbathes.

“Sometimes I felt like I was ironing a sheet with a warm spoon,” Mike says. “I must have written 10 drafts. Angela read every each of them. The novel has some 250,000 words. But even though it’s a long book, the chapters are very short. I wanted to be like a detective story from the very first story.”

He writes from three main angles. The hardest was writing from the perspective of a small Congolese boy. “When he hears about Jesus Christ, he says Jesus Cross. He doesn’t know much about Jesus or religion.”

When Mike was a small boy, growing up in Liverpool, he wrote the longest story that was ever written in his school. At least the teacher said so. He thought “Oh my god, I am Dickens or something”, but when he got to the end he thought that ”something was missing”. There was something wrong with the story but he couldn’t work out what. “I kept inventing twists and turns but I couldn’t think about an ending. I didn’t have a structure, I didn’t know what a story is…about obstacles and resolution and such things. I thought you just wrote. The teacher must have been...Jesus!”

Mike can sometimes write for 14 hours nonstop. He tends not to eat when he’s working. He just lives on peanuts and cups of tea. But these are lucky times. “These days, despite living in a quiet village, I am lucky if I get two hours without an interruption! A good day is about five or six hours of work, but usually it's a LOT less.”

Since Mike and Angela moved to the village last year, there are lots of things to do, such as chopping firewood, carrying wood, clearing snow, fixing fences in autumn and winter, digging the garden, planting trees, fixing fences  in spring and summer.

“Village life is not as quiet or as relaxed as it might seem. Plus, something unexpected seems to happen: the wind blows our fence down, or the water from the spring gets cut off, or too much snow falls and we are stranded for a month, or the tiles blow off the roof. Most recently, our dogs escaped and killed a lamb. Next day I worked for twelve hours to prevent them from digging tunnels under our fence,” Mike says.

The first thing I notice, when I enter Mike and Angela’s Bucharest apartment is a guitar, resting on a wall, next to a bookshelf.

“Music is such a powerful attraction. It’s very addictive,” Mike says. He opens his short-story book “Never Mind the Balkans, Here’s Romania” with a quote from Jim Morrison, the lead singer from the 60’s band The Doors: “Can you picture what will be, so limitless and free?”

After finishing college he played the bass in a band called Papa’s New Faith for about 4-6 years. “My dad was cycling to work every night to help me go to college to study English and French and then I said I wanted to be a musician.” But his parents never said anything and supported Mike whatever he wanted to do. It’s them to whom he dedicated the “Never Mind the Balkans” book.

Years later he started a band in Rwanda, where he and Angela lived for two and a half years. It was called Blak Blu Zungu: black folks playing blues with white folks. Zungu is an abbreviation of muzungu, meaning white guy. It was a big band, with 12 people, playing trumpets, saxophones, violins, harmonicas, keyboards. The band became pretty successful, but that affected Mike’s writing. He was then working on his Child Witch novel.

The problem was not the loneliness in writing, which he tried to balance by playing in a band. Mike’s a pretty solitary person anyway. He likes his privacy and he likes to write quietly. “The problem is that if I’m in a band, that’s all I need really. I don’t know what happens in my head. It’s something in my veins that I cannot resist. The few times when you have harmony in life it’s when you are playing on a stage. So when I’m in a band it kind of takes over.”

But if he’s not in a band, the music is in the words. “It’s like I can’t live without melody,” he says laughing and putting on a theatrical voice. “It’s maybe more difficult to achieve harmony when you’re writing because nobody is writing with you. But when you get a sentence right…Though most often it’s not right. Cutting - Cutting - Cutting. Writing is rewriting.”

Mike now has a little band called Blues de Burduf with children from the village where he and Angela are now living. He plays ukulele and teaches classic jazz songs to village kids: two boys and two girl, 7 to 9 years old.

“Last Christmas, Angela, the kids and I all walked around the village and sang 'colinde' at local houses, for three hours - ten houses, as it's a long walk between houses. Later we were invited to sing the 'colinde' in Magura's Orthodox church, and they received a great response. Even the priest seemed happy, and was clapping at the end.”