Who did the Romanians abroad vote for? Iohannis won in all major communities, except for Netherlands and Denmark

The record number of Romanians who voted abroad in the first round of the presidential elections played in the favor of incumbent president Klaus Iohannis, who got a massive 52.8% of the total votes in Diaspora, Romania-Insider.com has calculated based on partial results after over 95% of the votes abroad have been counted and centralized.

Dan Barna, the candidate of Save Romania Union (USR) and PLUS alliance, got 27.7% of the votes abroad and Theodor Paleologu, of the Popular Movement Party (PMP), was third with 6.4%. Former prime minister Viorica Dancila (PSD) got only 2.7% of the total votes abroad, even less than actor Mircea Diaconu (independent), who got 3.6%.

The hierarchy is the same in 9 of the 12 countries with more than 10,000 voters. The only exceptions are the Netherlands and Denmark, where Dan Barna beat Klaus Iohannis, and Moldova, where Theodor Paleologu was second, with a slightly better score than Barna.

The results in the Diaspora have influenced but haven't changed the overall results of the elections. Iohannis won the first round with a score of over 37%, followed by Dancila, with close to 22%, and Barna - 14.8%. 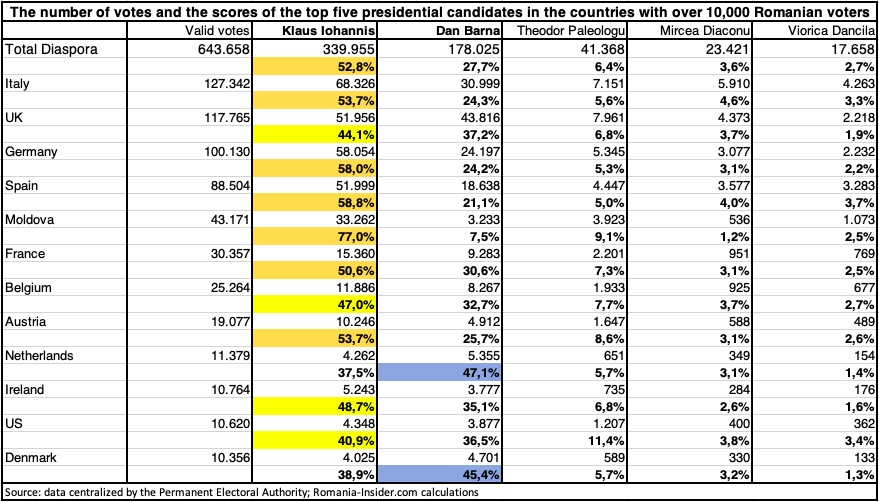 Who did the Romanians in Italy vote for?

Italy, which hosts the biggest community of Romanians abroad, also saw the highest number of voters in the first round of the Romanian presidential elections – over 127,000. Klaus Iohannis got 53.7% of the total votes in Italy, followed by Dan Barna, with 27.7%.

Who did the Romanians in the UK vote for?

UK saw the second-biggest number of voters – over 119,000. The scores here were much tighter: 44% for Iohannis and 37% for Barna. The structure of the voters was also significantly different from that in Italy, with 58% men voters versus 42% women. Almost 60% of the voters in the UK were young people, under 35. This shows that Romanians who live in the UK are mainly young people who immigrated in recent years, as opposed to those in Italy, who left the country some 10 years ago.

Who did the Romanians in Germany vote for?

Germany was third by number of voters in the first round of the Romanian presidential elections, with little over 100,000. Here, Iohannis secured a solid score of 58%, followed by Barna with 24.2%. About 60% of the voters were men and 40% women. However, the age structure is more balanced, with slightly more voters in the 25-34 age group. The number of Romanians immigrating to Germany has increased mainly after the 2009 crisis when it became more difficult for immigrants to find jobs in Italy or Spain.

Who did the Romanians in Spain vote for?

Who did the Romanians in Moldova vote for?

Of the 43,000 voters in the Republic of Moldova, 77% voted for incumbent president Klaus Iohannis. Former president Traian Basescu also used to be very popular in Moldova. Thus, the candidate of Basescu’s Popula Movement Party (PMP), Theodor Paleologu, got the second-highest score in the neighboring country – 9.1%, and Dan Barna was just third with 7.5%.

Who did the Romanians in France and Belgium vote for?

Over 30,000 Romanians voted in France and 25,000 voted in Belgium. Close to half of their votes went to Iohannis while Barna got scores of over 30% in both countries.

Who did the Romanians in the US and Canada vote for?

In the U.S., over 10,600 Romanians voted in the first round of the presidential elections while in Canada there were close to 3,900 voters. In both countries, Iohannis got over 45% of the votes and Dan Barna – over 35%. The voter base was closer to middle age in the US and older in Canada, according to demographic statistics from the electoral office - BEC.

Who did the Romanians in the Nordic countries vote for?

The situation is rather similar in Switzerland, another country where Iohannis and Barna got similar scores from a base of predominantly young voters.