Romanians abroad: Andreea M'Crystal (South Africa) - Romania can compete easily with many other countries as concerns its beauty, culture, performance and way of living 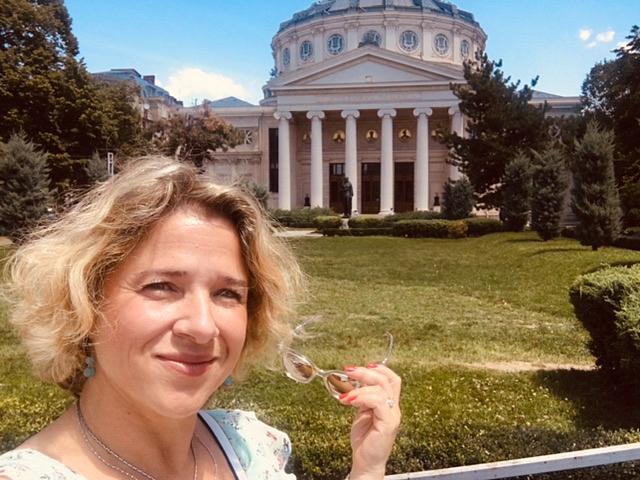 As part of our Romania Appreciation Weeks campaign, we're inviting our readers to share their stories and tell the world what they love about the country. Andreea M'Crystal joined our campaign and filled in this questionnaire. Below you can read more about what she loves about the country.

While she enjoys her new country's weather, extensive beaches, food, and healthcare system, she misses the family living in Romania, the local bread and sesame pretzels, the public transport, and the freedom of walking almost everywhere at any hour, among others.

She argues Romania, which benefited greatly from entering the EU, has many things to offer. "We have also many things to offer, in change. Things are moving - but I always believed that we need to do more. Belonging to the world is obliging you to work harder, to compete, to contribute," she says.

More on her experience and what she misses and not about Romania in the Q&A below.

What is your name and how old are you?

My name is Andreea M'Crystal and I am 48 years old.

When did you leave Romania and where do you live now?

I left Romania towards the end of 2011. I lived in France, close to Paris and Fontainebleau, for two years and a half, then moved to Aberdeen, Scotland for almost two years, and now I have been in Cape Town, South Africa for almost five years.

What have you been doing since leaving the country - professionally/education related?

I enjoyed life in a different way. Fulfillment is coming from the happiness level you are at and the lack of accumulated frustrations. Though I felt proud of my achievements, I put my job on pause.

I left Romania due to my husband's job, he got a new position within his company, and as his income was the main one in our household (I worked in Bucharest as a public servant - my main satisfaction came from the people I worked with and the work itself, the financial part, at that stage was less than what my husband earned), this was a logical move. Also, with a young baby at that time and due to repeated relocations, I had to put a stop, maybe a pause to my career, and since then, I am a mom and in charge of "home management," as I like to joke.

Before leaving, what was your main activity in Romania?

I graduated in management and worked for ten years within a foreign trade institution, subordinated to the Ministry of Economy.

I was with the Head Office of International Relations, and we were in charge, besides the bilateral relations with similar institutions abroad, with running and coordinating at the national level a technical assistance project for Romanian companies, developed by International Trade Center - a UN institution, located in Geneva.

As I had to move to Ploiești for a year (before coming back for another year in Bucharest) and because the commute would have been a whole story, I had to quit my job. At that stage, I was pregnant with my daughter - now ten and a half years old. I worked for another year as a consultant for the above-mentioned project until it has concluded, and then, we moved out from Romania. Lately, I thought of finding a part-time job, but with Covid, everything seems more complicated. Also, a lot of people lost their jobs, which doesn't make it easier.

Why did you decide to leave the country?

As I mentioned, it was not a long premeditated plan to leave Romania, just "life happening." Having a family may involve such decisions.

How did you choose the country where you live now?

My husband is South African, and due to the changes in the oil industry from a few years ago, we had to relocate again, and because we had a property in Cape Town plus family and friends, it was again the logical move.

Yes, I was giving it a thought. I am the only child, and my daughter is the only grandchild that my parents are having. They are still in relatively ok health, but there are hiccups and moments when it is frustrating that I can't be closer. And time is passing for everyone. We always had a great relationship. Unfortunately, my both in-laws passed some years ago, and we miss them dearly, and in this context, it would be lovely as both parts could benefit from this magic happening between grandparents and their grandchild. We have been lucky to manage to bring them here or to go on holiday there, but especially since all this story is dominating the world, things became more complicated for us and other families around the world.

What do you miss most about Romania in your adopted country? What are the things you don't miss?

1. As I said, my parents and friends;

2. The bread from home and my occasional sesame pretzel - hot and crispy.

3. Central heating:-)) Here, because the cold weather lasts only three months and is rather like our October/November temperature-wise (some days could even get to 20 degrees C at lunchtime), many or most of the homes don't have much of heating and rely on occasional mobile small gas heaters for comfort. I never liked more than 20-21 degrees maximum in the house (being in Bucharest), but being here during those few months, central heating, even on low, would add a bit to the cuddly feeling when it is wet and chilly outside.

4. The range of shops/products I have in Romania, maybe due to the EU proximity

5. Public transport and the freedom of walking almost everywhere at any hour. Many options to spend your free time - museums, theatres, exhibitions, fun and theme parks, etc.

1. Some mentalities and rudeness of the people. Because I lived there, most of my life, I perceive/hear and "see" better the people. It always bothered me the lack of tolerance and decency, and even though Romania has changed and achieved so much, still are moments when I am disappointed when I am coming home to see certain things. For sure, each country is having its own nice/ not so nice people, but when you see them home, it is worse. Romania is such a beautiful place. We have so many hidden treasures, including valuable people.

3. The lacks of the public health system or in general, the complacency from any system.

4. From what I've heard from my friends with children and what I read, the public education system struggles with a heavy curriculum or sometimes with missing qualified, dedicated teachers with modern views. A restructure/upgrade and trim of this heavy system would probably be very welcomed.

How has your life changed after you left Romania?

Due to my job, I have always worked with many nationalities of people. I have traveled, job/not job related, and have met wonderful people and seen beautiful places. They are part of me and my life experience. If possible, people should try to travel - it does open your mind, soul, and views. The world is beyond what you see daily, and being exposed to different styles of living, different races, different cultures, should make you think.

Do you think that Romania has changed since you left and in what way?

Yes, in a positive way. Being part of the EU helped Romania in a big way, freedom of movement and work, financially, economic and cultural. We have also many things to offer in exchange. Things are moving - but I always believed that we need to do more. Belonging to the world is obliging you to work harder, to compete, to contribute. As I said before, I believe that we still need to work on our mentalities and tolerance. But from other points of view, Romania can compete easily with many other countries as concerns its beauty, culture, performance and way of living.

Please name three things that you believe are better in your new country than in Romania and why.

Weather, health system, and their super tasty lamb meat :-)) (though I enjoy meat, I am not a great consumer of it). I know this would be the fourth, but oh, their large beaches, where you can enjoy your sunny day without a crowd.

What are the things that you miss most about Romania?

As I mentioned above, Romania is where is the home I grew up in, my parents and probably, a more variety of things.

What is the most frequent question about Romania that you get from your colleagues and friends in your new country?

My husband lived in Romania for almost five years and the most common question is how we have met. Also - For how long have I studied English?