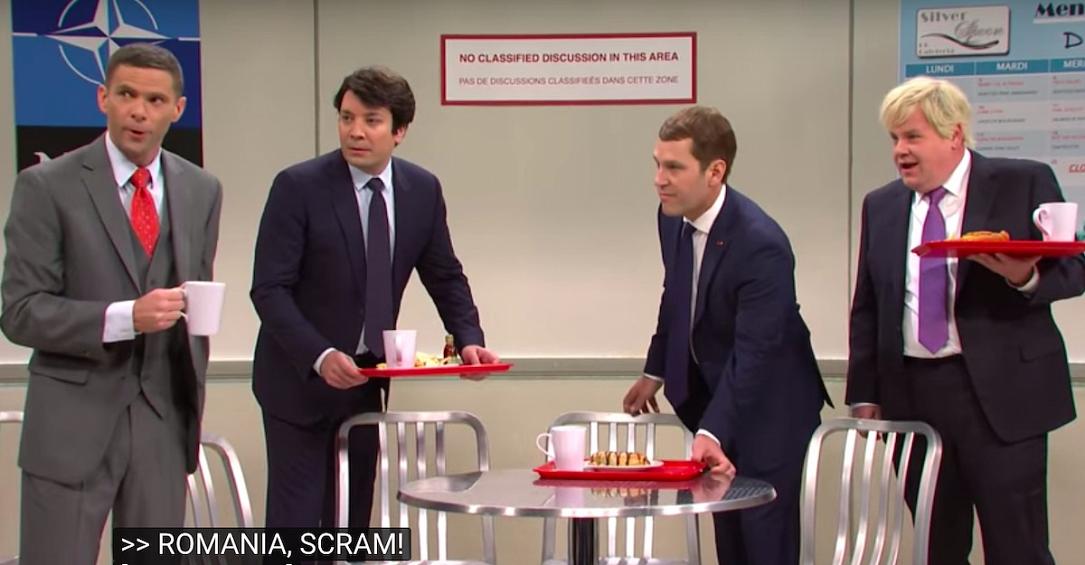 Romania appears as one of the “geeks” bullied by “popular kids” Justin Trudeau and Emmanuel Macron at the “NATO cafeteria” along with U.S. president Donald Trump, in the latest episode of the popular comedy show Saturday Night Live (SNL).

The sketch is a parody of the latest NATO summit in London, where Canadian prime minister Justin Trudeau, French president Emmanuel Macron and British prime minister Boris Johnson were caught on tape making ironic comments about US president Donald Trump during a cocktail break.

The sketch starts with the “bad boys” (Trudeau, Macron and Johnson) clearing a table for themselves: “Romania, scram!” says Trudeau. The actor playing Romania gets up from the table. “Sorry, I love your economies,” he says clumsily. “Au revoir, geek,” replies Macron. “Yeah, why don’t you Brexit out of here, dweeb?” says Boris Johnson, and Romania leaves the table crying.

The sketch continues with the three making fun of Donald Trump, whom they don’t allow to sit at their table. Trump gets sent to join Latvia at the “losers’ table” and Macron calls Angela Merkel (also depicted as sort of a misfit) to their table.

Watch the full sketch below:

Context: The NATO summit in London was held in a tense atmosphere amid diverging views between allied leaders on the future strategy. French president Emmanuel Macron’s recent comment about NATO being brain dead was not well received by allies such as US president Donald Trump or Turkey’s Recep Tayyip Erdogan.

Romania, which is one of the EU countries most reliant on NATO and US protection, has so far followed the requests of US president Donald Trump, being one of the allied countries that have allotted at least 2% of their GDP for defense expenses in recent years. Romanian president Klaus Iohannis and the leaders of other NATO countries that have increased their defense spending were invited to join Donald Trump for a working breakfast on the last day of the summit.