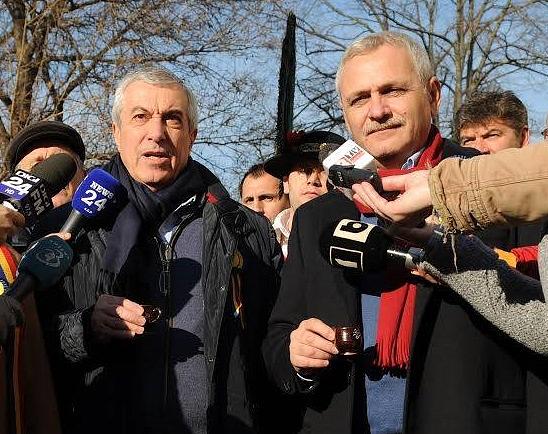 The leaders of Romania’s governing coalition parties, who are also the heads of the Parliament’s two chambers, issued a negative reaction on Tuesday to the US State Department’s message that urged Romania’s Parliament not to adopt changes to the justice laws that may weaken the rule of law and endanger the fight against corruption.

“Romania’s Parliament has taken note with unpleasant surprise of the press statement issued on November 27, 2017, by the US State Department related to the debate on justice reform (in Romania – e.n.),” reads the statement signed by Chamber of Deputies speaker and Social Democratic Party (PSD) leader Liviu Dragnea and Senate president and Liberal Alliance (ALDE) leader Calin Popescu-Tariceanu.

The two political leaders stressed that the Parliament only answers to the Romanian people and can’t be pressured into taking any decision. They also said that the US should trust the Romanian Parliament, which only wants to consolidate the independence of the judiciary and eliminate political influence from the functioning of the local justice system.

“We hope that the US State Department’s statement has been made in good faith, but we can’t ignore that it doesn’t seem to be the result of a balanced, objective and comprehensive analysis of the facts, rather echoing some opinions that circulate in the Romanian public space,” Dragnea and Tariceanu wrote.

“The nature and form of the US State Department’s statement are incomprehensible, considering that it’s hard to imagine that in the US people’s rights and freedoms are violated the way we often see in Romania,” the two politicians went on.

They claim that prosecutors in Romania present falsified wiretappings in court and that some even blackmail judges for ruling in their favor. They also say that secret services work together with magistrates and even offer judicial opinions.

Tariceanu and Dragnea also refer to the chief anticorruption prosecutor’s refusal to answer to a Parliament inquiry committee and the fact that a magistrate that violates human rights doesn’t answer to the law, which would be unimaginable in the US.

They say that the abuses that have taken place in Romania are the main reason for initiating this justice reform debate and that each amendment adopted by the Parliament’s special committee on justice reform is aimed at correcting abuses and vulnerabilities in the justice system.

“Romania’s Parliament would be happy to provide the US State Department with the full documents related to the principles the current justice reform proposals are based on, principles that have been widely supported by magistrate associations in Romania,” the letter concludes.

The two politicians’ reaction has angered opposition MPs, who said that Dragnea and Tariceanu don’t represent the whole Parliament.

National Liberal Party (PNL) leader Ludovic Orban said Dragnea and Tariceanu’s reaction to the US State Department’s letter was irresponsible and had serious repercussions on Romania’s strategic interests. He added that the letter was not discussed by the Parliament and that Dragnea and Tariceanu had no mandate to issue this reaction. He also said that the letter includes incomplete and unverified information presented as being true.

Other MPs from PNL and Save Romania Union (USR) also criticized the statement issued by Dragnea and Tariceanu.

Moreover, several civic organizations, including the Romanian 100 platform led by former prime minister Dacian Ciolos, asked Dragnea and Tariceanu to resign from their positions. They also asked PSD and ALDE to withdraw the justice laws from the Parliament.

However, PSD and ALDE are determined to continue their initiative to change the justice laws, as expressed by the people in charge of this process.

Romanian officials react to the US’ concerns about justice laws amendments