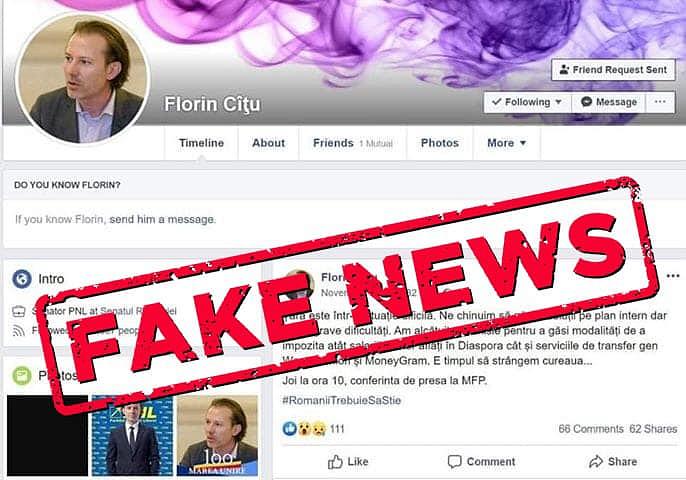 A wave of fake news has invaded social media in Romania one week before the second round of the presidential elections. Calls to boycotting the elections and alarming announcements about new taxes for Romanians in the Diaspora and pension cuts decided by the new Government circulated on social networks on Friday, Digi24.ro reported.

The aim of these campaigns seems to be demobilizing the voters of president Klaus Iohannis and the National Liberal Party (PNL), supporting the president in the elections, pointed to the Social Democratic Party (PSD) as the source. PSD leader Viorica Dancila, who served as Romania’s prime minister until recently, runs against Iohannis in the second round, the president being the clear favorite in this race.

Iohannis held a press conference on Wednesday, in which he said he would not participate in a debate with Dancila. He also took an hour to answer the journalists’ questions. During the press conference, some PSD members, including senator Florian Bodog and Bucharest mayor Gabriela Fires, posted messages on Facebook claiming that the president was wearing an earbud so that his staff could help him with the answers. Firea later deleted the post.

A journalist asked the president in the conference if this was the case, to which Iohannis had a spirited reaction, showing both his ears and pointing to his head as the source of the answers. “Do you really believe that I wouldn’t be able to do this without cheating? I don’t think so,” the president said laughing.

More fake news appeared on Friday. A photo was posted on Facebook in the morning of what seemed to be a screen caption with the Facebook page of finance minister Florin Citu. The photo included a message supposedly posted by Citu on Facebook announcing a new tax for Romanians abroad. “The country is in a difficult situation. We are struggling to find solutions internally, but we have serious difficulties. We have set up a commission to tax both the salaries of those in the Diaspora and the transfer services like Western Union and MoneyGram. It's time to tighten the belt,” is the post that appeared on a cloned Facebook page. Citu himself denounced the fake news.

The governing Liberal Party also reported this as fake news and said PSD was behind it. Over 670,000 Romanians in Diaspora voted in the first round of the presidential elections and more than half of them voted for Iohannis.

A series of fake messages that appeared to be written by the USD+PLUS alliance, which encouraged its supporters to boycott the second round of the elections, also circulated in social media on Friday. “Without stolen houses we can get far. BoycottSecondRound. We don’t validate the old political class!” reads one such message, which refers to the accusations that president Iohannis illegally obtained a house in Sibiu, which he later lost in court. The messages used the USR and PLUS logos and the fonts and colors the alliance has used in its campaign communication (see photo below). 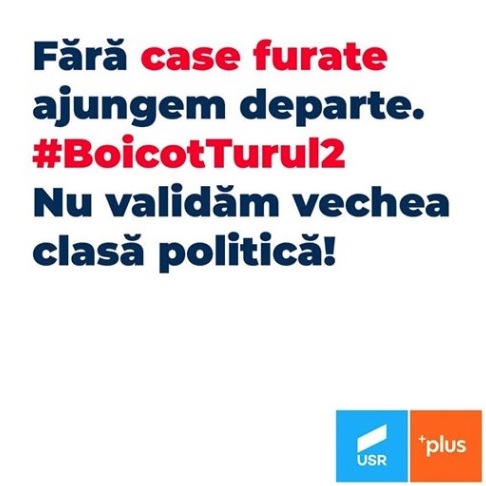 However, USR and PLUS representatives denied that these messages belonged to them. PLUS MEP Dragos Tudorache said the alliance would file a criminal complaint against PSD for these fake messages and identity theft.

The alliance, whose candidate Dan Barna was third in the first round of the elections, announced it would support Iohannis in the second round.

PSD also started a dirty campaign in social media, which includes direct attacks on the president, on subjects such as the lawsuits related to a property in Sibiu that Iohannis obtained illegally, as well as older ungrounded allegations used in the previous campaign (in 2014) about Iohannis facilitating international adoptions.

“Slowly, but steadily, PSD shows its ugly face. They throw venom, lies and fake news. This is PSD, this is how they know to run a campaign, and I think that they are only hurting themselves. We don’t need to answer them, the voters will give them a convincing answer,” Iohannis said on Friday evening, according to Mediafax.