Update - Pope Francis starts historic visit in Romania: I am happy to be in your beautiful country 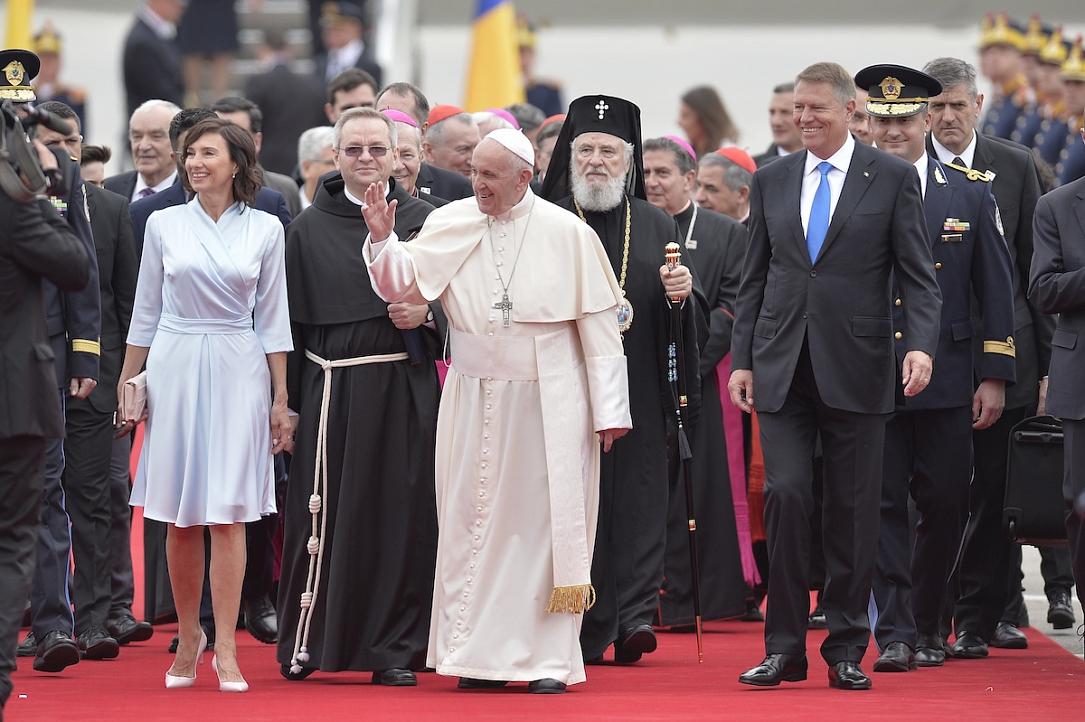 Pope Francis landed in Bucharest at around 11:30 on Friday, May 31, and received a warm welcome from Romanian president Klaus Iohannis and his wife, as well numerous believers and children from Catholic schools.

“It is a great pleasure to have you here, on Romanian soil,” Iohannis told Pope Francis, according to local Mediafax. Carmen Iohannis, the wife of president Iohannis, also said: “We are happy to have you here.”

Pope Francis and the presidential couple then headed for the airport building while the children, some of them dressed in traditional Romanian costumes, chanted the Pope’s name and waived Romanian flags. An emotional moment was when Pope Francis stopped to greet a child in a wheelchair.

The next stop was at the Cotroceni Palace in Bucharest, where the president prepared an official welcome ceremony. Friday’s program also includes a private meeting with president Klaus Iohannis and a meeting with prime minister Viorica Dancila, meetings with authorities, representatives of the civil society and diplomats, as well as a meeting with Patriarch Daniel, the head of the Romanian Orthodox Church. Next, the Pope will visit the new People’s Cathedral and then he will travel to the St. Iosif Cathedral, where he will deliver the holy liturgy.

Update: Both Pope Francis and president Iohannis held speeches at the end of their meeting at the Cotroceni Palace, and the Pope started his speech by saying he is happy to be in Romania.

“I am happy to be in your beautiful country 20 years after the visit of St. John Paul II, at a time when Romania, for the first time since joining the European Union, holds the presidency of the Council of the EU. This is a good time to have an overview of the 30 years since Romania liberated itself from a regime that suppressed civil and religious liberty and isolated it from the other European countries, and which, in addition, led to the stagnation of the economy and the exhaustion of its creative forces,” Pope Francis said, according to Stiri.tvr.ro.

He also said that Romania has engaged in a democratic project during these 30 years, “aiming at the essential recognition of religious freedom and the full integration of the country into the wider international context.” “It is important to recognize that, despite the many difficulties and shortcomings, Romania has taken many steps forward on this road,” the Pope added.

He also addressed the issue of migration during his first speech in Romania, and this phenomenon's consequences.

“I pay tribute to the sacrifices made by so many sons and daughters of Romania who, with their culture and their patrimony, enrich the culture of other countries.”

At the end of his speech, Pope Francis wished Romania “prosperity and peace.”

Live images from Pope Francis’ visit to Bucharest are available on the YouTube channel of state television TVR:

Pope Francis will be in Romania until Sunday, June 2. He will remain in Bucharest on Friday, and then will travel to Iasi, Blaj, and the Marian sanctuary in Sumuleu-Ciuc.