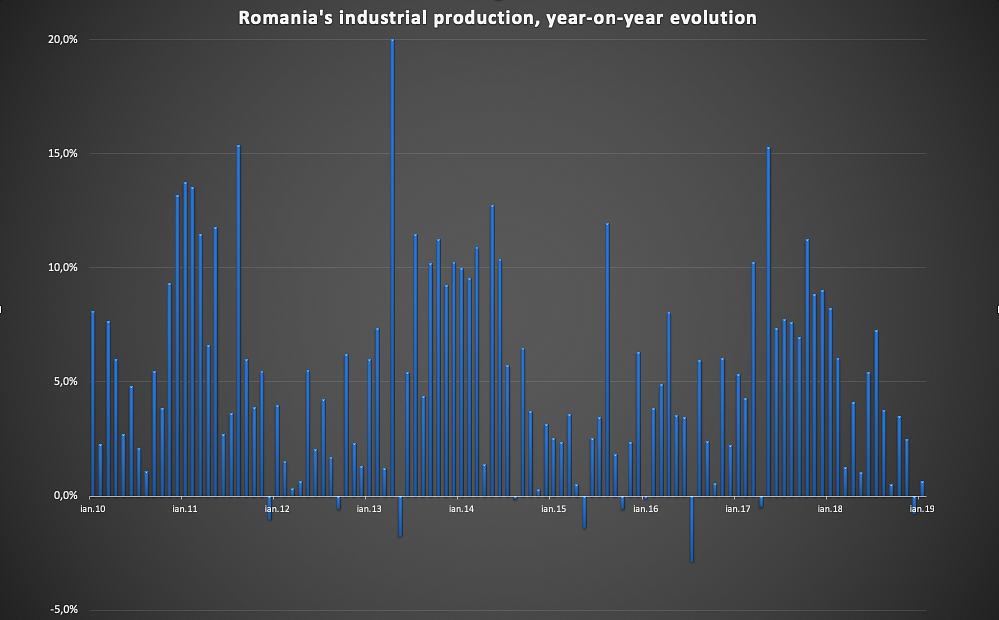 Over 2009-2018, Romania’s industrial output increased by an average annual rate of 5% (5.8% in the manufacturing sector), after the 6% contraction caused by the recession in 2008-2009. Romania’s industry relies in no small extent and increasingly on exports, and both the industry and the exports are increasingly dependent on the automotive industry as part of a regional trend. The country’s industry thus remains vulnerable to the activity and consumer confidence in Western Europe, while still having open the option of substituting a larger part of the imports on the local market.
The seasonally-adjusted industrial production index declined for the fourth month in a row in January, by 1.5% m/m. However, the index in the manufacturing industries increased by 0.9% m/m, compensating for most of the 1.1% m/m decline in December.
Sector-wise, the transport means (car) production maintained a robust growth rate of 8.6% year-on-year in January, while the output of electrical equipment rose as well, by 7.9%. However, light industries contracted by double-digit annual rates while the production of alcoholic drinks and tobacco decreased by 4.9% and 8.5% on a yearly basis as well.

Industry accounts for roughly one-quarter of Romania’s Gross Domestic Production and employs nearly one-third of its workforce. The industrial employment exceeded 1.6 million in the years before 2008-2009 to plunge below 1.3 million in 2013. It has not reached 1.4 million yet, amid a combination of tight labor market (prompted by the migration of the workforce abroad) and capital-intensive industries gaining ground at the expense of the labor-intensive light industries. On the upside, labor-intensive industrial capacities (meaning low-paid jobs) are increasingly replaced by more productive capacities as the wages are rising, squeezing out the low-paid jobs. Such developments are likely to stimulate a part of the active population, pushing up the employment and eventually households’ wealth. However, it is important that the rise in wages, generated by administrative decisions and by the workforce migration, be matched by investments in technology to preserve the industry’s economic sustainability.
Indeed the manufacturing industries (secondary economic sector) are in principle less value added compared to the services sector (tertiary sector), and the economic development has broadly been associated with a shift toward tertiary sector (and less manufacturing). However, until more-value added economic services sectors like those related to technology become more relevant in Romania’s economy, industry and particularly manufacturing remains a significant growth driver. Firstly, the shift from a manufacturing-based economy to a service-driven one requires accumulation of investments in education and research and secondly even the most developed economies are currently re-assessing the case for the manufacturing sector. Notably, significant energy resources and labor resources in Romania should in principle support more substantial manufacturing industries in the region. 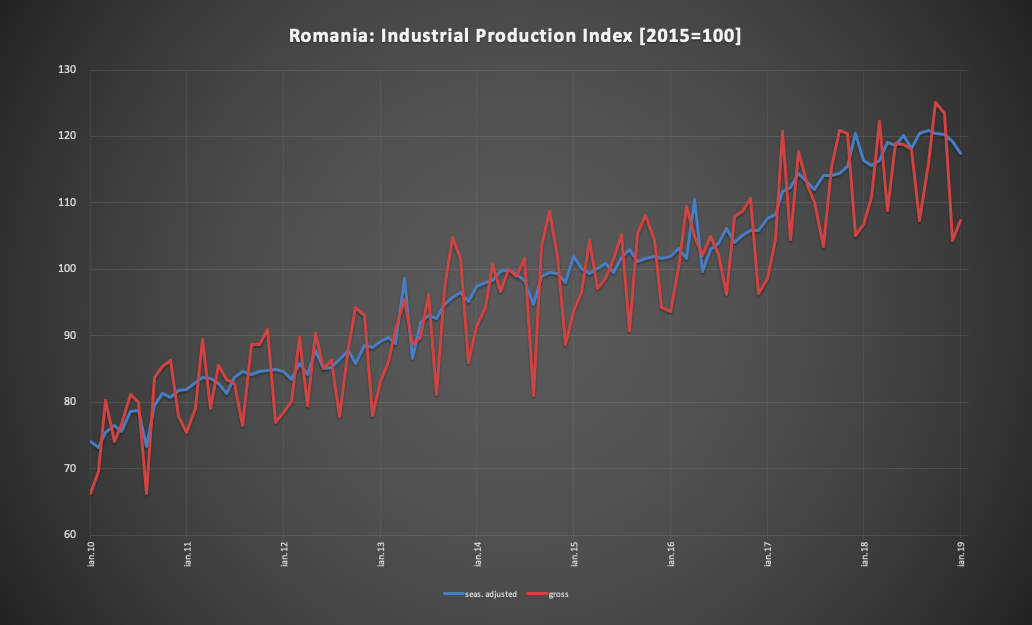 Industrial slowdown hopefully to be reversed by investments in technology

The industrial slowdown was not surprising, although the Government expects the sector to gain momentum again in 2019 compared to 2018. Such expectations are somewhat optimistic but supported by the increasing investment in technology revealed by 2018 net investment figures. The volume of investments (comparable prices) in productive equipment and machinery increased in 2018 by 15.6% y/y, marking a substantial acceleration from the 3.9% y/y advance in 2017.

The industrial slowdown in December-January, in Romania, was partly explained by external demand. The economic slowdown in Europe eventually hit the local industry, which had demonstrated outstanding resilience over the past quarters although a certain slowdown was visible: manufacturing output lost momentum to 2.4% year-on-year in 4Q18, from 4%-5% annual growth rates in the previous quarters. Furthermore, the seasonally-adjusted industrial production index, a measure that filters out the seasonal pattern of industrial activity reached a plateau in August-November last year to drop by a couple of percentage points in December-January.

Outlook for industry: Jury is still out

Neither external circumstances and even less the domestic economic environment are favorable to accurate economic projections at this moment. The state forecasting body expects 5.4% industrial growth this year, followed by a further slowdown to 4%-5% per annum in 2020-2022. However, it also forecasts 5.5% GDP growth, versus the 3%-4% (or even lower) independent projections. There is potential for industrial development, mostly visible in industries like chemistry or food manufacturing where imports account for a large part of domestic demand, but there are also growth inhibitors such as poor infrastructure, sticky workforce supply, and insufficient know-how for external expansion. Chimcomplex taking over the functioning assets of Oltchim or Ford planning to expand its output at Craiova plant might serve as success stories, but they also illustrate the obstacles behind foreign and domestic investors as well.
The main source of uncertainty remains the sharp rise in wages and its multiple effects on the industrial structure, investments in technology, activity rate among working-age population and migration. Wages/labor cost rising by double-digit rates (in real terms) over a prolonged period is not a typical situation, and the system did not yet absorb the impact of such move. However, in principle, the effects can be positive and negative as well with the combined impact still unpredictable. The Government’s policies and infrastructure investments, somewhat adverse to the business climate at this moment are another important source of uncertainty for industry.

Limitations of the model

The key weakness of the industrial production index (IPI) stems from the heterogeneous structure of the production: the industrial production may include a set of products in one month (e.g. only steel) and a different set of products (e.g. clothing) in another month. Conceptually, the production in the two months can be compared (and a monthly variation can be established) by comparing the value added generated by each activity. But for practical purposes, the methodology used to calculate the IPI relies on a set of weights associated to individual industries (derived from the value added generated by industries in a given base year, say 2015), the weights being used to calculate the weighted average monthly variation of IPI from individual monthly variation rates in each industry.
For instance in Romania, the weights calculated by the statistics office for 2015, indicates 18.8% weight for the food industry, 7.8% for the textile industry (textile and clothing production), 9.2% for transport means production, 7.1% for the metallurgy (metal processing and metallic constructions included) and so on. The monthly change of IPI in February 2019 will thus be calculated by weighting the monthly changes in each industry based on the weights.
However, in January 2019, as compared to the 2015 average, the production of cars soared by 52% while the coal extraction contracted by 23%. Under such circumstances, the weights calculated based on 2015 value added no longer reflect the reality. This is why IPI time series are not provided for very long periods. The result is that the calculated IPI annual (or monthly) increase will understate the contribution of the car production, which now most likely hold more significant weight in total industrial value added.
Another major limitation stems from the seasonal (and workday) adjustments, a procedure aimed at filtering out the seasonal pattern of the industrial production (lower production in August, for instance). With the change in industrial structure, the seasonal pattern changes as well. On the upside, the seasonal pattern is updated on a yearly basis since the process is less complex.