Nature conservation in the time of coronavirus: One foundation's work in Romania’s Făgăraș Mountains 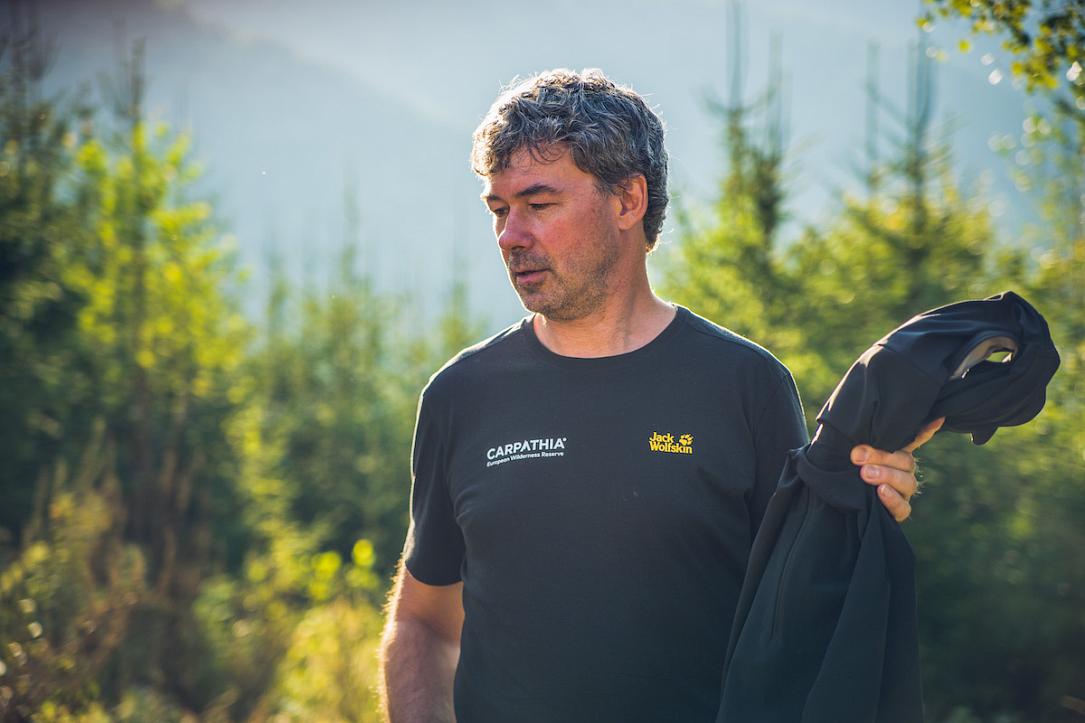 As the coronavirus lockdown measures were introduced in Romania in mid-March, the team of Conservation Carpathia, which works to create a wilderness reserve in the Southern Romanian Carpathians, started a community outreach program benefiting the elders in the area and helping children keep up with the school classes now delivered online.

Christoph Promberger, the executive director of Foundation Conservation Carpathia (FCC), told Romania Insider more about the foundation’s community outreach initiatives and plans to develop a food hub, reintroduce the beaver in the region, and set up a wildlife management board involving representatives from the communities in the area.

A lot of work is going on despite the lockdown and the restrictions, Christoph Promberger says, as he outlines some of the recent activities of Conservation Carpathia. FCC works in the Southern Romanian Carpathians to create a world-class wilderness reserve, “large enough to support significant numbers of large carnivores and to allow evolutionary processes to happen.” The project covers the wider Făgăraș Mountains Natura 2000 site, Piatra Craiului National Park, and Leaota Mountain.

After the military ordinance introducing the lockdown measures was issued, the foundation started talking to some of the mayors in their project area to see how it could contribute. They highlighted the situation of the elderly who no longer have families and have a very low or no income. “We said we have to do something about it. We cannot just let it happen,” Promberger recalls.

And, within ten days, the foundation rolled out the Food for Elders program. The program covered communities in Argeș county, namely Rucăr, Lerești, Dâmbovicioara, Valea Mare Pravăț, Stoienești, Cetățeni, Nucșoara, and Arefu, and Dâmbovița county – Runcu and Moroieni. It targeted more than 500 people over the age of 65 without a source of income or family support. During the state of emergency, they received weekly packages containing rice, sugar, cornflour, eggs, oil, seasonal fruits and vegetables, cheese, honey, and hygiene products.

Some of the products were purchased from big retailers, while others were sourced from small local producers to also help them throughout this period. “If we spend money, we want to inject as much capital as possible into the local economy,” Promberger explains.

After a local team was assembled and the funds raised, the first packages were delivered. By May 8, more than 3,000 packages had been delivered with the help of EUR 106,000 in funding raised from more than 60 different donors, from Romania, Europe, or the United States. The packages were delivered until the state of emergency ended, on May 14, and the week after. The last packages to be delivered also include five face masks for each person, which have been ordered from a textile company in Câmpulung.

Another idea that surfaced during the discussions with the mayors was that of the Getting Online project, which targets children in remote villages who do not have access to the online classes because they lack computers or no internet connection is available. Because of the Covid-19 pandemic, Romania has decided to keep schools closed until the end of this school year, and classes have moved online. 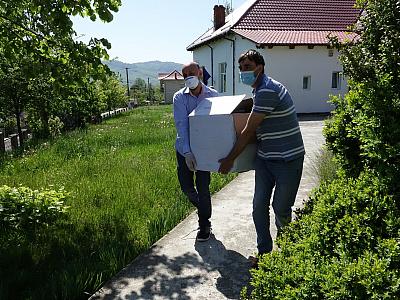 So far, children in Nucșoara, in Argeș county, have received computers after FCC partnered with Casa Bună initiative. The first 30 computers came from Ateliere Fără Frontiere (AFF) Association. Another 30 will come from Raiffeisen Bank, in addition to hardware from Alpha Bank, all allowing the project to expand to other villages. “The logistical challenges are higher because it depends on much more than the Food for Elders program. We have another 30 computers with our IT volunteers, and they are at the moment just installing the software,” Promberger says, explaining that sometimes simply getting the internet connection installed in remote areas can be a challenge.

Food for Elders and Getting Online are the new additions in the foundation’s set of projects. Among them, there is also one that focuses on eco-tourism - Cobor biodiversity farm. Although tourism of any kind is currently on hold, eco-tourism has a promising future, Promberger is convinced.  “Once the crisis is over, people will want to do eco-tourism even more; they will be more worried about mass tourism. We believe this will have a very strong growth in the next years, and again something where people can have an economic advantage from these beautiful mountains, not by cutting them [the forests] but by protecting them,” he says.

Another project that is being developed is the Food Hub, meant to help the small scale producers. Local food collected from small scale producers will be aggregated, processed, packaged, marketed, delivered, and sold to local and corporate clients, like supermarkets and hotels. Part of the plan is to also open small, own shops where the products would be sold. The Food Hub - Carpathia Food would offer meat, dairy, fruits & vegetables, beverages, and natural products.

“We have a very detailed business plan for the Food Hub, and we’re looking for investors at the moment,” Promberger explains. “People have great products in the area, and they end up at the store buying vegetables from Spain or Holland and so on, and that just doesn’t make any sense. If we have great products in the villages, then we should make it possible for people to buy these products.”

Before the coronavirus crisis hit, the foundation also had several events planned for this year. The highlight is Făgăraș Fest, a large event held last year in Leresti and planned this year in Nucșoara. Promberger says the foundation had to adapt, “like everybody.” “A few things like the events and larger meeting and so on we could not do. We started to go on home office a week before the lockdown. The rangers, of course, had to go out, they could not do their work online. It was a challenge because we always try to put their safety highest. “

Still, very many of the activities programmed are advancing. “The pace was, of course, slow with everything, but by insisting and pushing and asking and requesting, we managed to get everything because we did not do anything that was not approved by the authorities,” he explains. 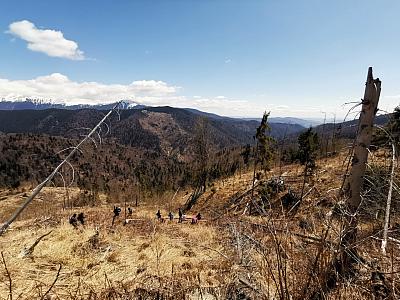 At the time of the phone interview for this article, on May 8, the foundation was getting ready to release the first bison into the wild, part of its bison reintroduction program in the Făgăraș Mountains. In November of last year, FCC announced that four bison had been brought from Germany, and seven more of Polish origin were to follow by the end of 2019. In the long term, the foundation plans to continue the gradual reintroduction of this species until the formation of a stable population of 30 bison in the initial area. This would add another local site to those in the Neamț, Caraș Severin, and Hunedoara counties, where the bison were reintroduced in recent years.

“We’re already working on the second bison reintroduction site. The first one is in the Pecineagu Lake area, and we are just preparing the second one in Lerești area, in Valea Râușor. We now have the building permit for the fence for the acclimation enclosure. So we hope that is all done by October so that in October we can bring more bison into the area. We have two sites at the moment, and we are looking at a third site.”

The reforestation campaign continued, with some 40,000 saplings planted this spring, also offering work opportunities for people in the area. Among the trees planted were 3,000 saplings of willow along the watercourses, a future food source for the beavers, which FCC wants to reintroduce, Promberger explains. “We have made a feasibility study for the reintroduction of beavers, and we are applying for beaver reintroduction in the Southern Făgăraș Mountains as well.”

As FCC has reached 55,000 hectares of wildlife management area, it also plans to develop a Regional Wildlife Management Board. “This is something totally new for Romania. We want to have representatives from all the local communities in the area, from the town halls, from the livestock owners, from the hunters, from the tourism sector, on such a board to meet, once every month or so, with them and decide together where there are problems, where there are situations that you can improve and where we can use our rapid intervention team. Then we create a model of wildlife management where there is real participation from the local community.”

The current crisis can be a good moment to think about how we have been treating nature, Promberger says, referencing EU’s Green Deal. “The future will lay in conservation, in a friendly way to deal with nature, not just this extractive way of just taking as much as you can get. […] Will Romania be again in ten years behind everyone else? Now it is the chance to make it ahead of everybody else.”