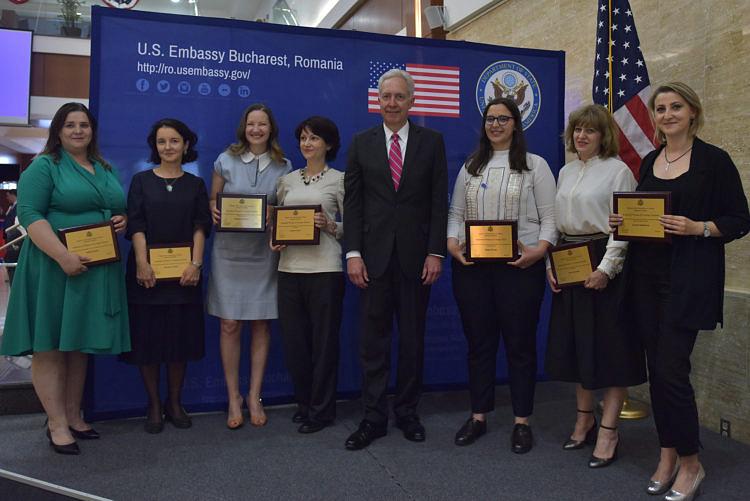 The U.S. Embassy in Bucharest awarded on Tuesday, May 28, seven Romanian women who are “strong, inspiring leaders who demonstrate unwavering commitment to their communities.”

One of them is Irina Novac, a young Romanian woman who, in 2016, was one of twenty-five Romanian high school students who took part in the Future Leaders Exchange, or FLEX, program, spending a year studying in Albuquerque, New Mexico, the U.S. Ambassador Hans Klem said. In addition to going to school, she also spent many hours volunteering.

Back in Romania, Irina received a grant from the State Department, through American Councils, to put together a conference aimed at bringing together young women and men from her region to hear from professionals and experts on the challenges women and girls face and how to address these issues. One of the panelists she invited was a transgender person. Once she began promoting the conference, she had to face many attacks on social media, which claimed that she was part of an American plot to undermine traditional Romanian values. Things didn’t stop there and she also had to deal with threats and other aggressive reactions. However, despite all of this, Irina organized the conference and is still actively supporting the rights of women and girls. She is the U.S. Embassy’s International Woman of Courage nominee for Romania for 2019.

The other six Women of Courage are investigative journalist Carmen Dumitrescu, Melania Medeleanu – the co-founder of MagiCamp (a summer camp for children with cancer), Carmen Uscatu and Oana Gheorghiu – the two women who are currently building a pediatric oncology hospital in Bucharest from donations, and Iustina Ionescu and Romanita Iordache - two leading legal experts and advocates for the human rights of LGBTI persons.

More details about the seven Romanian Women of Courage are available here.