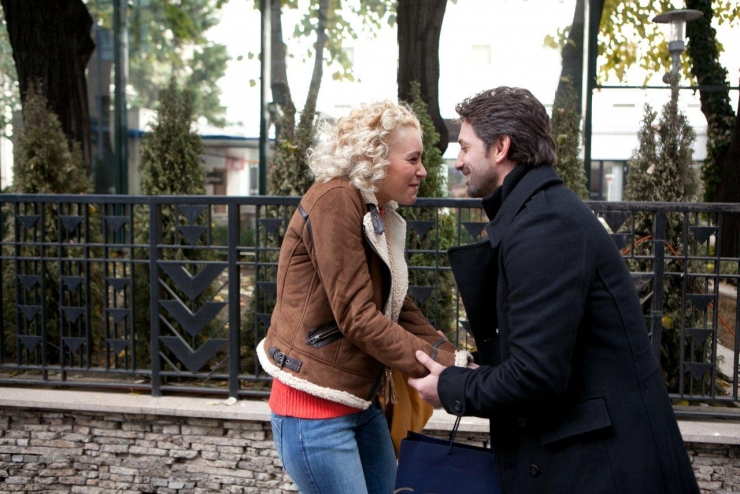 Romanian actor Andi Vasluianu has been a busy man lately, with Tudor Giurgiu's Of Snails and Men (reviewed here) having been such a huge event. He plays the scruffy romantic hero once again in Minte-mă frumos/Sweet Little Lies, another mainstream comedy to grace Romanian screens these past weeks. I cannot say often enough how good it is to see well-produced Romanian genre pictures in the cinema program next to the customary art house fare.

This comedy, however, is much more formulaic, with a title that says it all. It is the story of two shy people sending their less shy friends on a blind date, namely a street-smart Bucharest 'gigolo' (Vasluianu, of course) and a feisty bakery student (Diana Dumitrescu). And unless you have spent the last twenty years on the moon you probably know what is going to happen next.

American rom-coms have been studied hard for this one, but it is fun to see Bucharest in a screwball scenario and you will surprise yourself laughing more than you might expect. The actors are obviously having a good time, especially pop artist Loredana in a savory role where she sports a hilariously exaggerated French accent. The images are breezy and bright, so is the soundtrack. And Bucharest sure looks like the next hip capital.

The film has been running in cinemas throughout the country since last week. Unfortunately it is not subtitled but a solid knowledge of romantic movie plots combined with a bit of Romanian should do the trick.

You can find more details on the production on the MediaPro English website. For screenings at your local cinemas please see this site, and the movie trailer is inserted below.